BY Amanda Austin on March 27, 2014 | Comments: 2 comments
Related : Once Upon A Time In Wonderland, Recap, Television 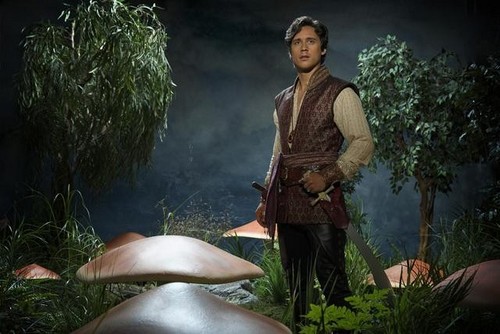 ONCE UPON A TIME IN WONDERLAND returns to ABC tonight for another magical episode. In “To Catch a Thief,” the knave and Alice’s friendship is put to the test.

On last week’s episode Alice and Cyrus discovered alarming information involving prisoners Jafar had under his control and changed their priorities. Meanwhile, the Red Queen was in critical danger and no one could help her except the Knave by surrendering information to Jafar that he had been desperately seeking. In flashback, Anastasia was about to marry the King and struck up a friendship with Cora that directly impacted Will. Cora also confronted Will resulting with him asking her for a shocking demand.  Did you watch last week’s episode?  If you missed it we have a recap right here for you.

On tonight’s episode in flashback, the Knave hunts Alice per Cora’s directive and he finds himself striking a deal to get his heart back, while in present day Wonderland, Alice and the Knave’s friendship is tested as he does Jafar’s bidding and steals from her. Meanwhile, the Jabberwocky attempts to free herself from Jafar’s control and Jafar is confronted by his former partner.

“To Catch a Thief” guest stars include Peta Sergeant as Jabberwocky, Zuleikha Robinson as Amara, Raza Jaffrey as Taj and Brian George as Old Prisoner.  The show was written by A. Nussdorf and J. Schwartz and directed by Billy Gierhart.

Tonight’s new series is going to be exciting, and you won’t want to miss it. So be sure to tune in for our live coverage of Once Upon A Time in Wonderland episode 12 tonight at 8PM EST! While you wait for our recap, hit the comments and let us know how your excited you are about the new series.

Tonight’s episode of Once Upon A Time In Wonderland opens with Will staring at Anastasia’s lifeless body from his prison cell while Jafar taunts him. Knave has his heart back in his chest, so he is very emotional. He vows that he will never help Jafar now that Jafar has killed Anastasia. Jafar tells Will there is a way to bring back Anastasia.

Flashback-Will and a group of soldiers are running through the woods, chasing Alice. The Queen has sent them to bring her in and accused Alice of murder. Will winds up being the soldier that finds Alice in the woods, and he lets her go.

Cyrus and Alice are trying to come up with a game plan in their tent. They need to return the well water to the well in order to free his brothers from their bottles. His mother has the well water, but Jafar has transformed her into his staff. First they must free his mother from the staff, then they must take the well water and put it back in the well, and then his brothers will be freed. Will barges in on their brainstorming session, Jafar has freed him. Will tells them that Anastasia is dead, and the only way to bring her back to life is to let Jafar win and change the rules of magic. And they have to return the staff that has Cyrus’s Mom in it to Jafar. Alice tells Will that it has been a long time since he has had his heart and he needs to stop thinking with it and start thinking with his head again. Will agrees that Alice is right, and he gives up his campaign to let Jafar win and decides to go with her and Cyrus to the Well of Wonders.

Alice, Cyrus, and Will set up camp to spend the night en route to the Wondering Well. Alice and Cyrus go to sleep and Will steals Jafar’s staff. Cyrus and Alice chase after him, they still have the compass that tracks the staff.

Back at the palace Jafar rubs Cyrus’s brothers’ bottles and frees them. He asks them if they know a woman named Amara. They both deny knowing her. So, Jafar prepares to put them back in their bottles.

Alice and Cyrus are gaining on Will, they separate to find him. Will pulls a knife on Alice, and takes her sword from her. He points out to her that he traveled to the ends of the world and fought to help her get the love of her life back, and now she is just being selfish and doesn’t want him to have the staff so that he can get the love of his life back.

After a heart to heart, Alice, Will, and Cyrus continue on their journey through the dark woods. And then, the jabberwocky appears. She reveals that she came on her own accord and Jafar doesn’t know she is in the woods talking to them. They tell the jabberwocky that they plan to defeat Jafar and get their queen back. Jabberwocky says she can’t help them, then she points at the snake staff and says “but she can” and the eyes on the staff light up.

The jabberwocky returns to the palace and says that she brought him a “treat,” she hands over Cyrus. Jafar asks him where his staff is, and Cyrus spits in his face. He tells Jafar that his staff is long gone, and so are Anna and Will. The jabberwocky pretends to get inside of Cyrus’s head and tells Jafar that he is telling the truth. Jafar tells the Jabberwocky to “sit tight like a good little girl” and goes to fetch Will’s bottle. Since he is Will’s master all he has to do is rub the bottle and Will has to return.

Will and Alice break into the dungeon where the Red Queen is laying in her coffin. Will runs through the palace and the guards chase him. Once they are gone Alice frees Jafar’s Dad, who he has held captive his entire life. Alice tells Jafar’s Dad that they are going to make sure Jafar “never hurts anyone else ever again.”

Jafar summons Will and chokes him and asks him where his staff is. Jafar turns when he hears a woman’s voice, it is Amara-Cyrus’s mother. Someone has already freed her from Jafar’s staff. (Most likely the jabberwocky.) Jafar asks Amara how she got out of the staff. Amara reminds him that she didn’t teach him all of her magic tricks. They begin using magic to throw furniture at each other across the room.

Amara promises Jafar that one of them are going to die today. Jafar throws a piece of glass into Cyrus’s chest and Amara rushes to his side. Jafar tells Amara that he knows the genies are her sons, and Cyrus will died if she doesn’t help him complete the spell and change the rules of magic. Alice rushes into the palace and finds Jafar and Amara completing the spell and Cyrus lying lifeless on the floor.