Once Upon A Time Recap – Snow Queen Arrives: Season 4 Episode 2 “White Out”

BY Stormy Elizabeth on October 5, 2014 | Comments: one comment
Related : Once Upon A Time, Recap, Television 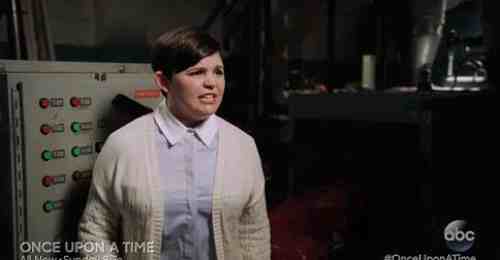 Tonight on ABC their fantastical series Once Upon A Time returns with an all new Sunday October 5, season 4 episode 2, called, “White Out.” On tonight’s episode, Elsa traps Emma in an ice cave, where the low temperatures endanger Emma’s life. Meanwhile, a depressed Regina isolates herself; Mary Margaret tries to restore the town’s electricity; and back in the past, Anna gets a meek David to stand up to Bo Peep.

On the last episode, a scared and confused Elsa found herself in Storybrooke and, fearful of the intentions of its residents, created a powerful snow monster for protection. With Robin Hood’s wife, Marian, back in the picture, Regina wondered if her “happily ever after” with the former thief had been completely quashed; while on their honeymoon, Mr. Gold found an intriguing object that made him question whether or not he should officially give Belle control over the dagger that made him The Dark One, and Hook was dismayed to discover that Emma seemed to be avoiding him while she tried to help comfort Regina after being the one responsible for bringing Marian back from the past and into Storybrooke. Meanwhile, in Arendelle of the past, as Elsa’s sister Anna’s wedding to Kristoff neared, Anna discovered that their parents – who died on-ship during a violent storm – were heading to a mysterious destination in a quest that may have held the secret to containing Elsa’s out of control Ice powers. And against Elsa’s wishes, Anna wanted to finish their journey to find out what they were looking for. Did you watch the last episode? If you missed it, we have a full and detailed recap right here for you.

On tonight’s episode while desperately trying to find her sister Anna, Elsa is startled by Emma and accidentally traps them both inside an ice cave, with the frozen temperature placing Emma’s life in peril. Regina, depressed over her likely breakup with Robin Hood, secludes herself away from the town and Henry, which saddens her son. And with the townspeople considering Mary Margaret their leader, she faces her first leadership task in trying to re-start a generator and restore the town’s electricity after Elsa freezes and damages the power lines. Meanwhile, in the Enchanted Forest of the past, Anna tries to teach a meek David to fight Bo Peep, a brutal.

Tonight’s season 4 episode 2 looks like it is going to be as magical as ever so make sure that you tune in to our live coverage of Once Upon A Time at 8:00 PM EST!

Tonight’s episode of Once Upon A Time In Wonderland kicks off with Elsa standing in the middle of the street, she announces that no one is leaving Storybrook until she finds out what happened to her sister Anna, and promises to find her.

Flashback – Anna pays a man named David a visit and says that she is on a secret mission and Kristoff told her that she could trust him. He gives her permission to sleep in his barn. A carriage arrives with a woman in it, and he tells her to hurry inside.

In Storybrook Henry is making a “get over your break-up” basket for Regina. A crow arrives at the window with a message for Henry from Regina, it says she doesn’t want to see him right now. Henry is devastated, Emma tries to comfort him. The electricity goes out in the diner, and there is a town-wide blackout. Emma invites Henry to come help her and Charming investigate, but he declines. It doesn’t take Charming and Emma long to figure out what the problem is, the entire city is border is frozen over, no one can enter Storybrook, and no one can leave.
Hook joins Charming and Emma at the ice wall to investigate, he jokes that he should have brought champagne for he and Emma’s second date. Emma excuses herself, and Charming says that it is time they have a talk about his intentions with her.

Emma finds a way in to the ice wall, and comes face to face with Elsa. Elsa explains she is looking for her sister, and she found her bracelet in the pawn shop so she knows she is here. Emma agrees to help her but she needs to know her sister’s name.

Flashback – The woman in the carriage demands money from David and his mother Ruth. She says they have until noon tomorrow to pay their debt, or else they will be her slaves. The woman leaves and Anna argues with David, she wants to know why he won’t stand up for himself and his farm. He argues that the woman is a powerful warlord, Anna offers to teach him how to fight with a sword.

In Storybrook, Hook and Charming find Emma talking to Elsa and Charming pulls a gun on her, Elsa panics and the ice wall begins trembling. An avalanche starts to begin, and chunks of ice and snow fall on Emma and Elsa. Emma and Elsa are trapped inside the ice wall, and Hook and Charming trapped outside. Emma contacts them on the radio and reveals that Elsa won’t let her out until they find her sister Anna and bring her to Elsa. Meanwhile back in town, everyone is having a meltdown without electricity.

Elsa isn’t bothered by the cold, but Emma is not able to handle the freezing temperatures. After Elsa bonds with Emma and discusses the curses of magic, Emma begins shivering and falling asleep. Elsa begs with her to stay awake.

Charming and Hook pay Belle and Rumpilstiltskin a visit at the pawn shop and see a picture of the necklace that was Anna’s. Charming says that he knows where Anna is, and barges in to the butcher shop to see Bo Peep. He knows that she branded Anna, and knows where she is. While Charming is fighting with her, Hook steals her sheep herding staff from the back room. Before they leave the butcher shop, Elsa contacts them on the radio and says Emma needs help, she is freezing to death.

Flashback – Anna trains David, and he pays Bo Peep a visit and fights off all of her guards. He manages to take down the evil queen and steals her necklace from her, the same necklace that Elsa said belonged to her sister Anna.

Charming and Hook head back to the ice castle. Charming talks to her on the radio and tells her that he knew her sister Anna and she helped him before. He promises to help her find Anna, but she needs to find it in herself to melt the ice wall and get Emma out before she died. Elsa concentrated and waves her arm, and manages to melt a tunnel big enough for her and Emma to climb out of the ice wall. Hook rushes Emma home to get her warmed up, charming thanks Elsa for saving Emma. Elsa explains that she can’t control her powers and is upset that she nearly killed Emma.

Flashback – David and his mother thank Anna for helping them fight off Bo Peep. She says she has to continue on with her mission, he parents need help with magic. David’s mom gives her the name of a magician who may be able to help her…Rumplestiltskin.

Hook and Charming give Elsa Bo Peep’s staff. She can feel her sister Anna’s heart beat when she holds it, so she knows she is alive. Charming and Emma vow to help her find Anna. Elsa tries to unfreeze the barrier she put around Storybrook, but for some reason the ice won’t come down. She is confused because she is the only person in the world with this power, so she should be able to undo the ice. Little does she know, the Snow Queen has arrived in Storybrook, and is hiding behind an ice cream store front.