BY Amanda Austin on September 29, 2014 | Comments: one comment
Related : Once Upon A Time, Recap, Television 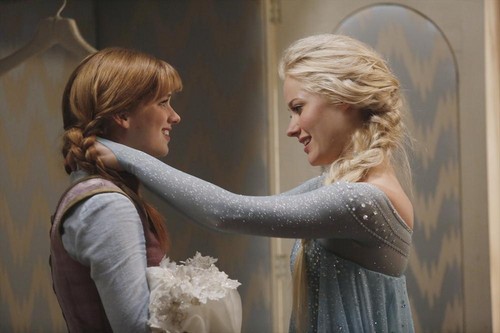 Tonight on ABC their fantastical series Once Upon A Time returns with an all new Sunday September 28, season 4 premiere, called, “A Tale of Two Sisters.” On tonight’s episode, in the fourth-season opener, a frightened Elsa makes a snow monster to protect herself. Meanwhile, Regina wonders if there’s a future for her and Robin Hood; and in the Arendelle of the past, Anna seeks to finish her parents’ thwarted journey.

On the last episode, in the season 3 finale, Mary Margaret was in labor and due to give birth at any moment, the residents of Storybrooke went on high alert in an attempt to ensure that Zelena didn’t try to steal her newborn baby for use in her ultimate game plan to turn back time and change her destiny — while obliterating Regina’s existence. Meanwhile, in the Land of Oz of the past, Glinda tried to convince Zelena to fight her evil tendencies and join her and her sister witches as a protector of Oz. But the appearance of a young girl from Kansas could turn out to be her undoing. Did you watch the last episode? If you missed it, we have a full and detailed recap right here for you.

On tonight’s episode a scared and confused Elsa finds herself in Storybrooke and, fearful of the intentions of its residents, creates a powerful snow monster for protection. With Robin Hood’s wife, Marian, back in the picture, Regina wonders if her “happily ever after” with the former thief has been completely quashed; while on their honeymoon, Mr. Gold finds an intriguing object that makes him question whether or not he should officially give Belle control over the dagger that makes him The Dark One, and Hook is dismayed to discover that Emma seems to be avoiding him while she tries to help comfort Regina after being the one responsible for bringing Marian back from the past and into Storybrooke. Meanwhile, in Arendelle of the past, as Elsa’s sister Anna’s wedding to Kristoff nears, Anna discovers that their parents – who died on-ship during a violent storm – were heading to a mysterious destination in a quest that may have held the secret to containing Elsa’s out of control Ice powers. And against Elsa’s wishes, Anna wants to finish their journey to find out what they were looking for.

Tonight’s season 4 premiere looks like it is going to be as magical as ever so make sure that you tune in to our live coverage of Once Upon A Time at 8:00 PM EST!

Tonight’s episode of Once upon A Time begins “a long time ago,” a ship is trying desperately to maneuver along the waves during a crazy thunderstorm, leaks are springing all over the ship.  Seconds before the ship is sunk, a woman throws a bottle with a note in it overboard.  Five years later…Anna and Elsa pay their respects at their parent’s grave site and leave flowers, Elsa says she has something for Anna’s wedding.  Fast forward to present day, Elsa arrives at the Storybrooke sign leading in to town.

Swan follows Regina outside and apologizes profusely, she had no idea what would happen when she brought Marian back to Storybrook, she reminds her that she traveled back in time to save her life because Regina was going to kill her.  Her boyfriend follows her outside and tries to reason with her, but Marina causes a scene and demands to know why everyone is talking to the Evil Queen.  Regina storms off, Swan insists that everyone gives Regina some space.

Elsa is walking down the dark road, and a delivery truck comes careening towards her.  Seconds before the truck hits her Elsa freezes it over with a wave of her hand and brings it to a stop.  She arrives in the town of Storybrook the next morning, she spots a wedding dress in a shop window and has a flashback to when she gave her sister Anna their mother’s wedding dress to wear at her wedding.  While they are in the attic trying on the wedding dress, they find their mother’s diary.

Meanwhile, Rumpelstiltskin musters up the courage to visit his son Neal’s grave at the cemetery.  He talks to his late son and confesses that the first time he ever called him Daddy was the happiest day of his life, until he found the sword that turned him in to a monster.  Rumpelstiltskin confesses that he lied to Belle and gave her the fake dagger, and he still has the real one, he plans to use it to avenge Neal.

Robin arrives on Regina’s doorstep and asks her to talk.  Regina argues that Marina is right, she is just an old evil queen.  Robin reassures her that his feelings for her are real, and he doesn’t care that she was an evil queen.  But, Marina is his wife and he made a vow to be with her until death do them part, so he can’t be with Regina.  He begs her to look in her heart and understand, but Regina is devastated.  After Robin leaves, Regina’s temper flares and a mirror shatters, she picks up a piece of glass and the evil queen smiles back to her.  She announces she needs her mirror because there is someone standing in the way of her happiness.

Snow White, Henry, Swan, and Hook are wandering around Storybrook looking for Regina, they’re scared that after what happened to Robin she’ll slip over to the dark side again.  One of the truck drivers that Elsa froze comes running down the street screaming for help, he explains to Swan and Hook what happened.  They find a trail of snow in the street and follow it down an alley, Elsa is hiding behind a milk crate.  She starts shaking and a whirlwind of snow appears and forms in to a huge snow monster.  Hook and Swan watch in disbelief.  Swan tries to reason with the four story tall monster, but he begins growling and chasing Swan and Hook out in to the street.  Everyone begins panicking as the monster starts knocking over buildings and walking through power-lines.

Regina is scheming to kill Marina, she puts the man back in the mirror and orders him to show her when she crossed paths with her.  She coos, “mirror, mirror on the wall, show me who I want to kill most of all.”  The mirror shows her a scene in the woods where she was trying to find Snow White and Marian wouldn’t tell her where she was.  After spatting insults back and forth with Marian, Regina announces she will behead her and have her head on a platter.  It will be too obvious if Regina kills Marian in Storybrook, she plans to go back in to the past and kill her before Emma arrives and saves her.

Elsa hides between two buildings and watches everyone run from the snow monster.  She has a flashback and remembers when she couldn’t find her sister Anna.  Her fiancé Kristoff confesses that she went to Mist Haven and already boarded a ship.  Elsa races off to try and stop her.

Everyone chases Elsa’s snow monster in to the woods, Emma uses her powers to try and take down the monster, but he knocks them out unconscious.  Robin and Marian come to their rescue with their bows and arrows, which are useless against the beast.  Moments before the monster slaughters Marian, Regina appears and blows up the beast, saving Marian’s life.  Everyone is shocked to see Regina show up and save Marian of all people, she tells Marian “welcome to Storybrook” and then vanishes from the forest.

After everyone leaves the forest, Emma hangs back with Hook, she is concerned because she knows someone created the snow monster and it isn’t the last they will see of it.  Hook asks her what is really bothering her, and she confesses she feels guilty about Regina and bringing Marian back.

Emma pays Regina a visit and bangs on the door while Regina sits on the other side, refusing to open it.  Emma reassures her that Henry brought her back to Storybrook to bring back the happy endings and she is going to find a happy ending.

After Emma leaves, Regina calls her mirror.  She announces that they are going to change her fate, it is time to change the book, and it is time for villains to get their happy endings.

Elsa sneaks in to the pawnbroker shop after house, she spots a snowflake necklace that she gave Anna before her wedding.  Elsa has a flashback of herself standing on the dock with Anna’s fiancée, Anna’s ship has already left and Elsa can’t stop her.  She is concerned about Anna travelling to Mishaven alone, also known as the Enchanted Forest.  Elsa takes the necklace off the shelf and holds it up and says “don’t worry Anna I will find you.”