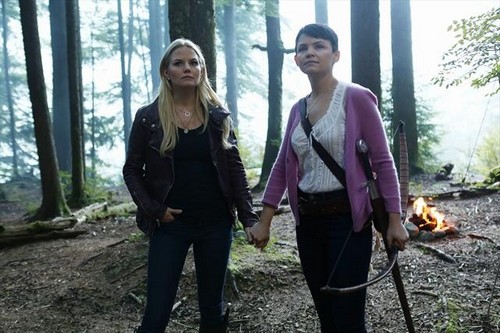 Tonight on ABC a whole new episode of ONCE UPON A TIME airs called “Into the Deep.” On tonight’s Cora attempts to steal the compass to locate the entrance to Storybrooke, and Regina and Mr. Gold must put David’s life in jeopardy so he can contact Mary Margaret across the lands to give her some vital information.  Did you see last week’s episode? We did and we recapped it here for you!

On last week’s show Ruby’s feared turning into a wolf during the first curse-free Storybrooke full moon was confirmed when one of the town’s residents was viciously murdered, and Ruby was the prime suspect; Decker – aka King George – threatened to expose David as a shepherd, not a prince, and not fit to run the town as sheriff; and Leroy stumbled upon some treasure in the Storybrooke mine that could help bring Mary Margaret and Emma back into our world. Meanwhile, in the fairytale land that was, Red Riding Hood found a kindred spirit in Anita, a charismatic and mysterious leader of a pack of humans who, like Red, turned out to be wolves.

On tonight’s show Cora does everything in her power to steal the compass away from Mary Margaret and Emma in her quest to find the entrance to Storybrooke. Meanwhile, in order to protect Henry from further danger, Regina and Mr. Gold must put David’s life in jeopardy in an attempt to put him in contact with Mary Margaret across the lands to give her vital information that could help her and Emma return through the portal back to Storybrooke

Tonight’s episode 8 is going to be exciting, and you won’t want to miss it. So be sure to tune in for our live coverage of the season 2 episode 8 of Once Upon A Time — tonight at 7PM EST! (Yep we get it earlier here) While you wait for our recap, hit the comments and let us know what you thought of the premiere of Once Upon A Time last week!  Catch pics from tonight’s episode below! Don’t forget to come back at 7PM EST for our recap!

Tonight’s recap: Tonight’s recap opens in the fairytale that was.  We are at the bottom of the beanstalk and Captain Hook jumps down and of course Cora is there and she wants the compass.  He lets her know the compass eludes him at the moment.  Cora tells him he has betrayed her by stealing her protection spell.  Hook promises her they are going to Storybrooke together.  Cora tells Hook he chose Emma and he know has to face the consequences.  She is not going to kill him, but she is going to leave him there while she goes to Storybrooke and he won’t have his revenge.

He tries to convince her to change her mind, and assures her he can get the compass back.  Cora is not buying it and lets him know she is going to do it on her own and she leaves him there.

Cora appears in a room and she has the heart in a case, she opens it andshe blows on it and she tells something to rise.  The people who I presume were dead start to rise from the dead.

Emma does not understand how Aurora could have seen Henry in the room.  Mary Margaret tells her it could be true it could be a sleeping dream.  Emma is upset but Mary Margaret tells her it is okay now because she knows someone who can help them.  They are going to send Aurora back to the dream about the burning room and she will tells Henry what they need to get home.

Back in Storybrooke Henry wakes up and tells David and Regina that Emma and Mary Margaret are alive and they need help to get back, someone is stopping them.  Henry tells them it is Regina’s mother Cora and Mr. Gold knows how to stop her.

Henry asks if Cora is powerful, but Mr. Gold claims Cora is not as powerful as he is.  David wants to make sure Henry is okay doing this (going back to the burning dream)  Mr. Gold assures them what he faces in the burning room is far less dangerous than what they will face if Cora comes back.

Mr. Gold starts to tell Henry a fairytale, in the fairytale is the clue to how to stop Cora.  It has to do with ink from squid and Mr. Gold tells Henry where to find it.

Back to the dream Aurora is in burning room and she is getting burned in the dream.  Henry keeps screaming where to find the answer to stop Cora, but Aurora cannot hear him.  There is something there that is stopping them.  Aurora is screaming and Mulan wakes her up.  Mary Margaret, Emma, Mulan and Aurora are being attacked, they try to fight them off but one of them gets Aurora.

Henry wakes up and tells Regina and David that he did not get the chance to tell her, she got sucked out of the dream.  Henry starts to moan in pain and they look at his arm and it is burned.

Cora has Aurora in the shaft, she offers her food.  Aurora refuses, she thinks the food is poisoned.  Cora wants to trade Aurora for the compass.  Cora is convinced that Snow and Emma won’t let Aurora die.  Cora mocks Aurora about wanting to go to Storybrooke to find a new man.  Cora tells Aurora if she shows her a little courtesy she may show her how to get Prince Philips soul back.  Aurora kicks her and tells her off.  Cora sends her raven to tell Snow that they have to bring the compass by sundown or she will kill Aurora.

Mulan wants the compass – but Emma wants to try to find a way to save Aurora and keep the compass.  Snow wants to inhale sleeping powder and she wants to go to the room to meet Henry.

Regina is trying to help Henry and his burned arm, but Mr. Gold tells her he will help.  He also tells them, Henry needs sometime to rest before he goes back.  David and Regina are not pleased about Henry going back.

Regina is against it because Aurora is gone.  David realizes that Snow will be there because she was once under a sleeping spell.  David tells Mr. Gold to put him under the sleeping spell, Mr. Gold tells him it is dangerous.

In the Storybrooke that was, Hook is trying to wake Aurora up.  He is letting Aurora go because he is mad at Cora for double crossing him.  Emma asks Aurora to give Emma a message, that the deal they made is still on.

Emma is worried about Snow going into the dream curse and to the room.  She asks Snow about it.  Emma and Snow play the blame game and then realize blaming themselves is useless.  Emma decides it is Regina they should blame.

Henry makes up and Regina is making a potion.  Henry asks Regina if she has been making magic, she promises she has not.  Henry tells her it is good she is now using magic to try and help people.  Henry asks if David will okay.  Regina tells Henry David will be asleep and he won’t die.

Henry wants to be the one to go back.  Regina tells Henry that both David and she agree they won’t let Henry go back in, it is too dangerous.  Henry is worried David won’t wake up, Regina tells him that David and Snow always finds there way back to each other.

Regina has the potion, she puts a drop on the spinning wheel and now David will prick himself.  Henry hugs him and David assures him it will be okay, he has faith.  Henry gives David his necklace to help protect him from the flame.

In the fairytale that was Mulan has the sleeping potion and she gives it to Snow, the effects should last one hour.

Mr. Gold wishes David luck, he when he falls asleep he will have to find a room with no doors to it to find Snow.   He pricks his finger and falls.

David is in the dream curse looking around.  There are mirrors everywhere he starts calling for Snow.  Meanwhile Snow is in the burning room yelling for Henry.  David looks around and he soon realizes he is on top of the room.  He uses the torch to break the floor and he falls through to the burning room.

Snow sees David/Charming and she does not understand why Henry is not there.  David tells her he could not risk sending Henry back.  David tells her that they can stop Cora by pricking her with the quill.  But it is not the quill it is the ink and the ink is in Rumpelstiltskin’s cell.  Snow realizes the only way David got there was with a sleeping curse.  David jumps over so she can give him the cure, a kiss by his true love.  But when they try to touch they realize they are not really in this world together and Snow cannot help him.  She is waking up.  David tells her when she comes back she can wake him up then.  They profess their love for each other.

In Storybrooke, Henry tries to wake David up with no success. Regina assures him David is okay.  Mr. Gold shakes his head.

Snow wakes up and she is upset because David is trapped and the only way to help him is, True Loves Kiss.  Emma assures Mary Margaret they will get back to Storybrooke to save David.  Snow tells Emma the key to getting rid of Cora is in Rumplestilskin’s cell.  They get ready to go and realize that Mulan is gone and so is the compass.

Cora comes down to the cellar and sees Hook and realizes Aurora is gone.  She tells Hook she has to kill him, Hook tells her he brough her a present.  He tells her to go in his pocket, she asks, “is that?”  Hook responds, “With that you will get everything you want!”

Emma and Snow track down Mulan with the compass.  Snow jumps on Mulan and demands the compass.  All of a sudden Aurora shows up.  Emma asks how she got there and Aurora claims Hook let her go.  She also tells Emma that Hook said she should have trusted him and they could have gone to Storybrooke together.

oops… All of a sudden we see Cora with a heart and it is Cora speaking though Aurora.  She thanks Hook and says, “You took a heart!”

Cora agrees to take Hook to Storybrooke – they will have the compass soon.

Meanwhile Aurora/Cora asks the girls if they have a way to stop Cora and they tell her YES!