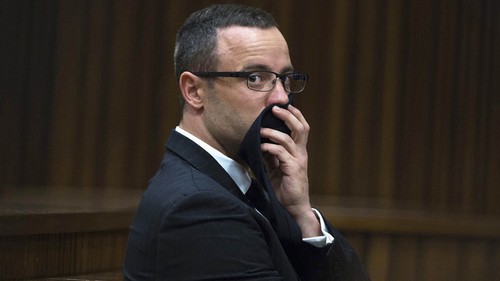 Oscar Pistorius was the epitome of inspiration. The double-amputee’s tenacious ambition made him a world renowned legend. At the 2012 Summer Olympics on 4 August, Pistorius became the first amputee runner to ever compete at an Olympic Games. This historic, watershed moment was a powerful reminder of “living one’s dream”.

Six months later, on Valentine’s Day 2013, Pistorius was arrested for shooting his girlfriend Reeva Steenkamp. He fired several shots through bathroom door, because he thought “there was an intruder in the house”. Steenkamp died on the scene. His murder trial began on 4 March 2014, one month after the anniversary of her death. The televised court case has received worldwide media coverage, but none more so than in my home country of South Africa.

Steenkamp’s mother and father, June and Barry Steenkamp, opened up about their daughter’s tragic death in an exclusive interview with HELLO! magazine. June, who has been present throughout the trial, has forgiven Pistorius for what happened.

“I don’t hate Oscar. I’ve forgiven him. I have to – that’s my religion. But I am determined to face him and re-claim my daughter. It’s important for him to know that I’m there, that Reeva’s mother who gave birth to her and loved her, is there for her,” she said.

Although neither June nor Barry had met Pistorius before the trial, Barry still regrets not intervening on his daughter’s behalf: “If I’d known what I know now, I would have attempted to stop the relationship. Reeva wouldn’t have liked me for attempting to interfere, but as it turned out she would have thanked me in the end.“

The poignant and tragic interview was overshadowed by the release of a haunting video on an Australian television station. The so-called “documentary”, titled “Running Scared”, shows “Pistorius walking and running on his stumps, his sister Aimee lying in the bathroom next to the toilet, Pistorius picking Aimee up and carrying her down the stairs and Pistorius himself lying next to the toilet. It also shows Pistorius screaming.”

Evidence Room, “a US company that specialises in forensic animation”, allegedly leaked the video to The Seven Network. According to a News24 article, “Lawyers for the athlete said it was commissioned by his defence team and obtained illegally by the TV station. But the Australian television network defended its decision to run the footage on Monday, insisting it was not obtained unlawfully.”

The executive producer of the Sunday Night programme denied the allegations: “We would not have run the footage if we thought we had obtained it illegally. The story was run in Australia only and not made available to any other territory.“

Pistorius’ defence team will conclude their case on Tuesday. He faces 25 years in prison if he is found guilty of murdering Reeva Steenkamp.

In June Steenkamp’s own words: “Since Reeva died our lives have been on hold. We will only be able to continue when there’s a proper conclusion.”