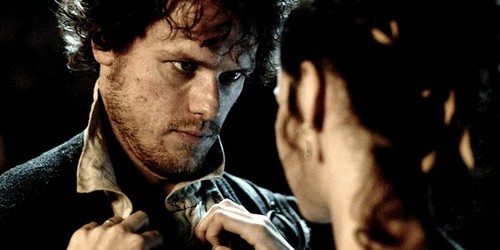 Whenever an on-screen couple shows this much chemistry, fans immediately start ‘shipping’ them together off-screen. Outlander stars Caitriona Balfe and Sam Heughan may dating and new to the world of massive fan interest, but they’re quickly becoming fan favorites thanks to their steamy chemistry on the show. Seriously, those two could set fire to the TV screen, that’s how hot they are.

Although viewers have yet to see any of the sex scenes between the stars, both Caitriona and Sam have filmed the intimate scenes a long time ago. New interviews with both Sam and Caitriona went public yesterday, and both stars touched upon the sex scenes that their characters had to engage in.

Caitriona Balfe is very specific in her description of the sex scenes, explaining [in an interview with Nuke The Fridge], “It’s quite gritty. It’s quite raw and real. I’ve filmed some sex scenes already but they’re very integral to the storyline and they’re not really gratuitous at all.”

Sam Heughan also stated [in a different interview with Reuters], “I love his relationship with Claire, I think it’s nice to see something that’s complicated.” He’s also described the sex scenes as quite ‘hot’ in various interviews, but we’ll leave it up to you to decide whether he was being honest or whether it was just fan service. Seeing the actors embody their characters, I think he was telling the truth. I mean, if they translate what’s on the page, then I don’t see they could not be hot.

Anyway, this is another round-about way to speculate on whether these two are dating in real life. They have fantastic chemistry, they often comment on each other’s looks in interviews, and Sam has even gone as far as to call Caitriona very ‘sexy’ in a recent interview. Again, they’re clearly on great terms with each other, so it could just be a friendly co-star relationship. But based on all the behind-the-scenes GIFs and articles we keep getting, I’m thinking it’s more than possible that they could be hooking up in real life.

Of course, it’s their business if they are, so good for them. If they’re not, then I’d like to commend their restraint, and also praise their acting ability. They’re selling that relationship like no tomorrow, almost to the point where I have a difficult time believing that they’re not dating in real life.