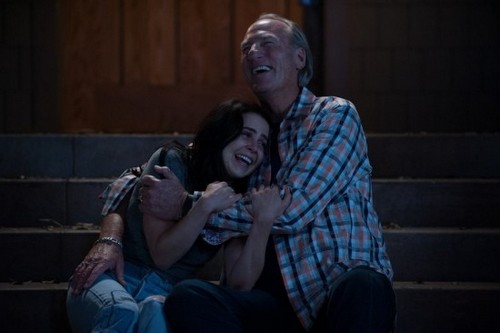 Tonight on NBC Parenthood starring our favorite family the the Bravermans returns with an all new Thursday October 2, season 6 episode 2 called, “Happy Birthday, Zeek” On tonight’s episode Kristina attempts to meet the needs of her students at Chambers Academy while Adam deals with a lunch vendor who suddenly quit his job. Elsewhere, Zeek faces a difficult health decision; Sydney has trouble at school, prompting Joel and Julia to visit with her teacher; and Sarah tries to figure out how she feels about Amber’s news.

On the last episode, Sarah (Lauren Graham) stole  Zeek (Craig T. Nelson) away on a birthday trip to Las Vegas, and what unfolded would set the Bravermans on a dramatic season-long course. Amber (Mae Whitman) faced a life change and grappled with how to navigate the new landscape of adulthood. Two days before opening, Adam (Peter Krause) and Kristina’s (Monica Potter) charter school was far from ready, and the whole family sprung into action to help complete the construction. Did you watch the last episode? If you missed it, we have a full and detailed recap right here for you.

On tonight’s episode Kristina (Monica Potter) struggles to accommodate the individual needs of her Chambers Academy students, and Adam (Peter Krause) gets roped into the chaos when the school’s lunch vendor quits on the spot. Zeek (Craig T. Nelson) faces a tough decision about his health, and amidst strong opinions from the other siblings, Crosby (Dax Shepard) supports his dad. Joel (Sam Jaeger) and Julia (Erika Christensen) meet with Sydney’s (Savannah Paige Rae) teacher when girl drama erupts at school.

Zeek’s birthday is coming up and he’s in for a world of surprise. Not only are his adorable younger grandchildren doing an original birthday song for him but his doctor has also informed him that he’s going to need surgery on his heart. A bypass in an open heart surgery and so it come with a lot of risks. Yet Zeek is fighting the surgery he most defiantly needs.

He says he could try other things like a diet change again but his doctor had told him and Camille that they have exhausted all other avenues. So Camille had to turn to Adam for help. She asked her son to talk to his father for her. She feels like he could maybe make some headway in convincing her traditionally stubborn husband into doing something he doesn’t want to do.

And because of other things going on, Adam had to pass the buck to Crosby. Kristina needed her husband to pick up 40 individualized lunches for her on the hurry seeing as their vendor quit on her at the last minute. The vendor couldn’t keep up with all the menu specifications and Kristian couldn’t calm down the chef. So basically Adam had to put an avoidable dent in his wallet in order to get the students their personalized meals when he could have saved himself the trouble if he had done what Kristina had originally asked and spoke to the vendor himself.

Later Adam found a nice compromise between blowing through their budget and still feeding the kids. He told Kristina to open a culinary elective. That way the kids would cook all the meal and they wouldn’t have to worry about finding a chef. Then he did something stupid – he volunteered to be the one in charge of the class. He said he would teach the kids how to cook.

The class ended up being both hectic and a headache waiting to happen. Though Adam had thought Crosby had taken care of their dad’s situation. Crosby actually did not do that. He instead allowed his father to talk him into believing the surgery wasn’t worth it. So now Zeek has someone on his side while the rest of his family naturally side with Camille.

It had all come out as Zeek’s birthday party. Adam had checked in with Crosby and Crosby had told him the truth about his conversation with their dad. He told him their dad didn’t want to take the risk of surgery which infuriated his siblings. They want to keep their dad around for a lot more years. Hence they don’t understand why he’s being so stubborn about a common surgery that has a 95 percent rate of working.

Adam later had a heart to heart with Zeek and according to Zeek the reason it’s so important he don’t do this surgery is because if it fails then he wouldn’t be going out on his own terms. Yet he did end up having a change of heart. And it was all thanks to Amber.

Once he heard that Amber was pregnant and that he was going to be a great-grandfather – it put his life into perspective. He realized he wanted to be around to see the baby born and grow up. And his other grandchildren were already talking about what they were going to do for his 80th birthday. So the surgery just kind of made sense, you know, when he stopped thinking about himself for a change.

Amber is scared enough about having a baby. She’s going to need all the help she can get. And though Sarah is great – she didn’t know how to handle Amber’s news in the beginning. It took her awhile to become the supportive parent Amber needed.
And it’s not easy being a parent. Julia is struggling with Sydney who has suddenly decided to bully a classmate of hers and no matter how old kids get – Zeek knows his children are always going to need him. When have they not gone to him with their problems?