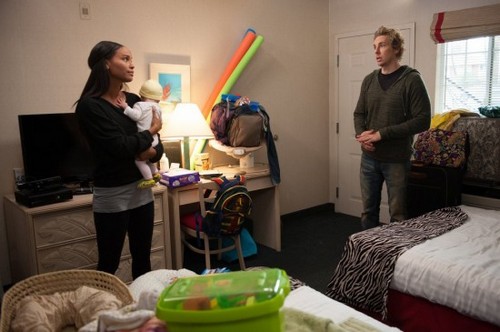 Tonight, the hit show Parenthood airs on NBC with its 13th episode of season 5. The episode is titled “Jump Ball” and on the show tonight Hank (Ray Romano) spends time with Adam (Peter Krause) and confronts his problems, while Amber (Mae Whitman) runs away from hers..  If you missed last episode, CLICK HERE for a full recap.

Camille has returned. Zeek will never admit, but he missed her fiercely when she was away. Then again he doesn’t need to say it. She knows he missed her and she missed him too. As a welcome back present the family arranged a surprise party for her back at the house. And it was good gift. She got to see everyone all at one time. It helped seeing as she carried back sweets for the kids. Both young and old!

There was minor hiccup though when she hugged Amber. She wanted to let her granddaughter know that she heard the whole story already from Zeek so it was ok if she needed someone to talk to. Well, Sarah stopped her before she could finish that sentiment. She knows how hard it has been for Amber lately. But even Sarah is wrong. Amber does need someone to talk to. She’s been acting erratic and calling off from work.

Hank on the other hand realizes he needed help. He stopped by the studio. He wanted to give the guys his portrait of Bob Dylan in return he wanted to know Max’s doctor’s number. Adam was worried Max had acted up again but Hank assured him the number was for another matter. Later , Adam goes over his discussion with Hank to Kristina. He suspects Hank might have Asperger. And though it isn’t political correct both Kristina and Adam hope he does. To them Hank would be a ray of hope. If he does have Asperger then maybe Max’s future could be great too.

Hank owns his own business and ok all of his relationships have failed. Yet none of that matters when you take in his daughter. Max could have family one day. They hadn’t noticed how huge that was until they suspected Hank. The nest day Adam goes over to Hank’s. He wanted to chat for a little bit and then strangely enough he invited Hank to a poker game. When Crosby heard Hank was coming to their game though he wished Adam had run by him. He finds Hank strange and tells Adam so. Adam told him to snap out of it. Hank was coming and it was about time Crosby learned to treat him like a person.

Sarah is only just realizing how bad it’s gotten for Amber. After Amber called in sick, Sarah went to visit her with chicken soup. Amber wasn’t there. When Sarah called her she said she was driving around. She doesn’t know where she’s heading and she wants to keep it that way. She leaves out the part about how she took a stop to drink up.

Sarah can’t be there for her daughter, but she can be there for her sister. Julia came by her place in tears. She told Sarah everything. She mentioned Ed and how she fears Joel may feel like he has to make a point. He didn’t come home one night and she had wondered if he was with someone else when he told her he slept on the couch at the office. Sarah comforts Julia. She tells her Joel wouldn’t do something stupid. He’s just angry at the moment.

Drew has to help someone he loves as well. He has to convince Amy to start thinking about her future. She’s been staying with him for the past two weeks and his roommate is getting concerned. Is she ever going back to her own school? Drew doesn’t know the answer.

He had run into Natalie on campus. She had heard from his roommate that Amy was still there and she wanted to warn him. Not necessarily for herself this time. She had to remind him that he’s in college now. Maybe it’s time to let his old high school girlfriend go. Drew returned to his room and for the first time sat down with Amy to talk. He needed to know what her plans were. It seems Amy was depressed at school. Everything about it depressed her and the only person she thought could make it better was Drew.

Drew hasn’t asked her to leave. He chooses to make her happy while she’s with him.

The poker game was a bust. Hank kept winning until he got bored and he wanted to sit a round out. He also ran off at the mouth before he decided to sit out the next round. Soon the rest of the guys had called quits too. They all went home leaving Hank and Adam behind. With it being only the two of them, Hank opened up to Adam. He told him about the meeting with the doctor. He admitted the appointment was for him although he didn’t get a definite answer. The doctor told him it was a jump ball. He can’t say Hank doesn’t have it and he can’t he does. He would need to run more tests.

Zeek thought with Camille’s return that everything would return to norm al. He didn’t suspect she would want to go traveling again much less concentrate on her art while she’s at home. Camille has outgrown him. She wants to keep going places and see new things. And what makes it worse is that she doesn’t seem to mind if Zeek won’t go with her.

Amber winded up at her dad’s job. The fact it happens to be at bar helped. She was drinking and beginning to cause a scene when he stepped in. He also stopped her from trying to drive drunk. He saw how angry she was at him and at life; he thought it would best to let her sleep it off at his place.

Still he did call her mom. Seth wanted to let Sarah know that Amber was safe. By the next morning he was prepared to address all of her drunken accusation from the night before. She had blamed him for Ryan leaving her. She had said it was because she was too much like him. When she was sober enough to listen he told her that could never happen. She’ll never be like him. When he looks at her all he can see is how strong she is like her mother.

Joel made up his mind. He’s going to look for a place for himself where the kids can come visit him. It’s not a divorce and he doesn’t know if the separation is permanent or not. He simply needs space.