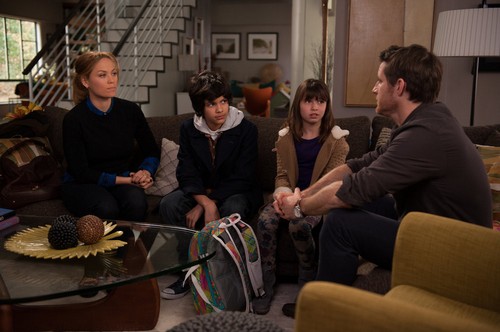 Tonight, the hit show Parenthood airs on NBC with its 14th episode of season 5. The episode is titled “You’ve Got Mold” and on the show tonight the Braverman’s learn that patience is a virtue.  If you missed last episode, CLICK HERE for a full recap.

Crosby’s house has mold. It will be dangerous for his family to continue living in the house while it’s there but he can’t expect the insurance company to put the family up in the Ritz. He might have withheld things from them. Like how he’s had a small puddle in his house for the last three months. That puddle isn’t covered by his insurance. Adam tells him he’ll most likely have to stay with their parents.

Funny how Adam doesn’t offer up a place to stay. Then again he’s trying to teach his wife how to say “no” to people right. It seems like every parent raising a special needs child wants her help figuring out how IEP works. And Kristina always gives them it. She’s never said no and Adam wants to teach her boundaries. Other people can’t keep relying on her to fix their problems. Not when they have a family of their own to look after. Max, their special needs son, keeps getting kicked out of class. He’s really smart but he can’t control speaking over other people. Even if it’s his teacher.

Kristina did try to work out boundaries with a recent case involving a single mother and her daughter. What stooped her from saying “no” was when she saw how much the other woman was stressed. The daughter’s IEP is tomorrow and the mother still doesn’t understand how everything works.

Sarah is fighting her own boundaries issues. She hired Hank to be her assistant and now he’s sort of overriding her decisions and making her doubt herself. She wanted to do their photo-shoot on the beach. She was so confident that the idea would sit well with the advertisers; she never took in what Hank would say about it. He’s like in Max in that way. Sometimes he doesn’t mean to speak over other people. It just happens.

Hank said the beach was the worst place for the shoot, but he could understand why she doesn’t agree. After she’s new and he has worked in the business for over 20 years. However he’s willing to compromise. He let the photos appear as if there at the beach. He hates photo-shop and she knows that. He’s only willing to do it just so she wouldn’t do the shoot at beach.

Camille signed up for an online course. She got an electrician to come down and wire the house for wifi. Zeek wasn’t all that thrilled but he did like seeing her happy. Camille is always happy when she gets to paint more.

Julia doesn’t know where she is in her marriage. Both she and Joel don’t know if the separation is temporary or not. What they do know is that they have to prepare their kids. Since Joel’s absence though, the kids have gotten closer. It’s almost as if they know something is wrong and it really is about time Joel told them he’s moved out. Later, Julia asks him not to give up on her and he couldn’t tell her he won’t. At this moment, their marriage is in limbo.

Adam learned what’s been going on with Max during History class. Max had let it slip that his teacher constantly sends him to the library whenever he begins to act up. Because of that, Max has missed a significant amount of class. Here is Kristina helping out other parents with their IEP and they need to go over their son’s. Her meeting with the IEP board didn’t go well. No one had any idea where to put the child she was advocating for. The teenager was too high functioning for Special Ed and yet she couldn’t be put into the mainstream.

Adam heard how her day was and he wants to sympathize but he feels he should bring up Max’s situation. Once she heard Max’s teacher, Mr. Wineman, simply didn’t want to deal with her son – she was furious. Adam was smart enough to set up a meeting beforehand with the teacher and all Kristina wants to do is tear the teacher to shreds. How dare he kick her son out of class everyday just for convenience?

Max on the other hand doesn’t see the problem. He’s too busy helping others solve their own mess. He was with Hank in the studio when they began to speak about the job. Hank had quit the job with Sarah after she wanted to fight for her vision. Hank refused to budge and so he quit, but not before he accused her of only getting the job because she slept with Carl. Sarah was deeply offended by that. Hank could have made a sincere apology although he’s never been good with words.

It was max that got him to see that he didn’t quit for artistic differences. The real reason was jealousy. He was still jealousy the company picked Sarah over him. That’s why he hasn’t been treating her fairly. Sarah knows better than to expect a gripping apology from Hank. She knows when he arrives at her door ready to get back to work that it’s his way of saying sorry. Plus he finally let her planned the shoot he way she wanted. She got to do it on the beach.

Crosby heard from the cleaning crew that it’s going to take longer than expected for them to clean up the mold. For the moment, his family is staying at a motel and Jasmine knows they can’t stay there for long. She told Crosby to call his parents. They’re going to need a new place to stay.

Julia and Joel finally told their kids the news. Of course the children didn’t take it well. To them, Joel moving out means they won’t be a family anymore. It was hard for the whole family to deal with the actual move. Joel managed to agree with an informal custody agreement with Julia. Which was made even more awkward when he asked if he could still use his key.

When he left, there was some regret on his part, and yet he kept going. The kids complained of not feeling well after he had gone. Julia wasn’t feeling so well herself. She packed up the kids and went to her parents. Crosby and Jasmine were able to guess why she was there. It was only her parents that were surprised. So Julia told them why she didn’t want be in her house.

The kids were able to run to Zeek and Camille when they needed to. How will they feel when that’s no longer an option? Zeek admitted to his wife how much he missed her when she was away. Seeing as she plans on going away again; he told her she didn’t have to be only one left making sacrifices. Zeek decided to sell the house. He doesn’t want to be left behind again.

Kristina and Adam never got anywhere with the school over how Max was being treated and frankly that only makes them even more worried about Max going to high school next year.