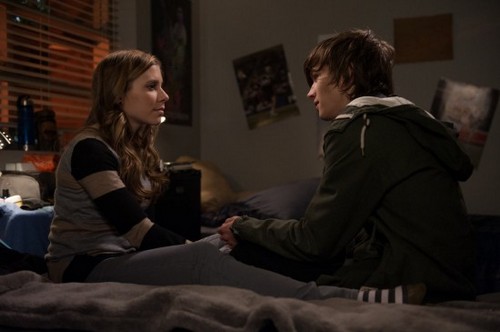 Tonight, the hit show Parenthood airs on NBC with its 14th episode of season 5. The episode is titled “Just Like Home” and on the show tonight Julia turns to her siblings for support; Jasmine and Crosby move in with Zeek and Camille while work is being done on their home; and Drew asks Amber for romantic advice..  If you missed last episode, CLICK HERE for a full recap.

The new living situation is hard for Julia. Her children now have to spend alternate weekends with their dad and suddenly she’s found herself in the house alone. Her siblings all try to help out and they can’t. Adam interrupts his own romantic getaway with Kristina to check in on her. While Sarah got so nervous for her that she couldn’t help bring her in the middle of a date with Carl.

Sarah’s date with Carl though didn’t go as planned. She felt awkward around him instead of their usual easy conversation. Then when she returned to the studio she found out that Hank went behind her back to alter her photos. He said it made the pictures look better and although she agrees; she doesn’t like how he didn’t even ask her about it first. And a small part of her truly believes he did it out of jealousy.

Hank had noticed how she had makeup the night before and he correctly assumed that she was going on a date with Carl. But he was he was his same old self as in she couldn’t figure out if he was mad or indifferent. Is Hank jealous?

In the meantime, Crosby got some rather disturbing news. He and the rest of the family were having dinner when Zeek dropped his bombshell. He informed them that he and Camille were selling the house and were going to go travelling. Crosby was more than his fair share upset by this. He didn’t want to say goodbye childhood home. And that’s why he made sure to grab a minute alone with his dad.

Crosby started off his conversation by saying he knew Zeek did not want to give up the house and he was right. If Zeek had a choice then he would stick around for as long as possible. But he doesn’t have that choice. To stay would mean watching his wife leave again and he can’t do that a second time. Selling the house will keep his marriage alive and not even Crosby can say anything against that.

Julia has taken to escaping the house. She’s been keeping busy and is hoping that it will stop her from nearly mourning her kids. And yet she doesn’t want to keep accepting pity calls from her family. Adam tried to reach her and when he couldn’t; he talked about returning home with Kristina. They’ve been enjoying themselves away from the kids although Kristina knows her husband won’t be able to fully relax unless he can check up on Julia for himself. He’s her bug brother and it’s hard to let go.

Speaking of letting go, Drew was forced into talking to Amy. She’s practically living with him now and sometimes she waits for him outside class. Natalie spoke to him about it. She said it was kind of creepy and that maybe Amy should return to her own school. Drew agrees with her but he didn’t know how to break it to Amy. He had to go to Amber’s for help.

Amber told him that simply loving someone wasn’t going to fix them. No matter how much they may wish otherwise. So Drew spoke to his girlfriend. He told her that he loved. Then Drew said she couldn’t keep hiding out at in his dorm. It was time for her to speak to her parents.

It was hard dropping her off back home. Still, Drew knew it needed to be done.

Well, Sarah was partially right about Hank. He was slightly jealous over Carl just not in the way he thought. After meeting up with his therapist he then went to apologize to Sarah. He tried to say the right words he had learn at the doctors and she was able to catch on what sound very much rehearsed. So he ended up using his own words.

He was sorry about so many things. One thing he was truly sorry about was that he wasn’t like Carl who knew what to say. Hank admitted he was seeing a doctor for what could possibly be his autism. And Sarah was able to be there for him.

The same way she made sure to be there for Julia. She stopped by her sister’s place to cheer her up and found out that her siblings had the same idea. Crosby stopped and so did Adam. They drunk a lot and wound up turning Julia’s into a small party. Julia was just so grateful they all showed up for her.

She missed her kids and they missed her. Sydney was bitter about staying with Joel for the whole weekend while Victor played it cool all the way to bed time. The elevator in the building kept making noises and scaring him.

The formerly blasé Victor needed to speak to his mom in order to get back to sleep. But how long can they last before he becomes like Sydney and gets bitter of their new lives?