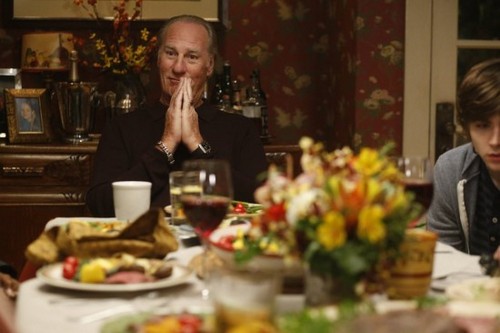 Tonight, the hit show Parenthood airs on NBC with its 17th episode of season 5. The episode is titled “Limbo” and on the show tonight Jasmine and Crosby butt heads over an issue with Aida’s upbringing; Julia learns disconcerting news about Joel; and Sarah continues to work with Hank.  If you missed last episode, CLICK HERE for a full recap.

Besides Hank’s obvious feelings for Sarah their work environment is made even more awkward with the obtrusive arrival of Max. Max sometimes can’t understand how he gets in the way off their work, but when Sarah tries to tell him to go home; he’s quick to get angry. His parents have tried to talk to him about this and it seems they still need more time teaching him about social niceties.

Speaking of which, Cosby was forced into being rude. He had to go to Joel and tell him he couldn’t be Aida’s godfather anymore. Cosby didn’t want to do it but his mother-in-law pushed him into having the conversation since (as she explains it) she wants the christening to go through before her granddaughter starts suffering from it. And then later on his sister drills him on what Joel’s response was. Julia wanted to know if Joel at least fought to stay a part of the family. So to learn he conceded quite easily kind of made his stance on their own relationship very clear – Joel has checked out.

She called him later in tears demanding to know why he wasn’t fighting for anything. He was just sitting back and doing nothing while the rest of them found a way to live their lives without him. Joel tried to tell her that, yes, he does want his family. And her response of course is when? Whenever he want his family back she’ll be there waiting.

The christening for Aida is going ahead and Camille wants to help out. She moved pass what Cosby said to her last week and decided to not hold it over him. And that’s why the beloved grandmother wants to be part of the celebrations. So far her in-law has pretty much taken over the christening but she wants to do a pre-christening dinner. There’s never been a tradition for those yet Cosby went with letting his mom throw one.

Like Adam told him later, these things are mostly for making the families happy. And Cosby made him happy by asking him to be the godfather. Adam hadn’t seen it coming and had felt honored to have his brother picked him for such a big job. Probably at this point Cosby should have told him that he was actually the second choice, but he was too chicken to do it.

Adam shared the news with his wife and even Kristina thought it was a great honor. Though now their whole family will have to be at all the christening events. From the dinner all the way to luncheon after the baptism; it forced Kristina into finding a way to deal with Sarah. When Sarah brought Max home after his outburst she felt like Sarah then wanted an apology from both her and Max. Whatever Sarah’s intent was with what she said, Kristina thought it was rude.

That’s also why she hasn’t allowed Max to go over to Hank’s studio since the incident. When everyone arrived for the dinner, Max and Kristina immediately sought to put some distance between themselves and Sarah. Adam thought they were being dramatic, but he soon realized they had a point with the way his sister saw them.

Sarah doesn’t think they give Max any boundaries. She told Hank this and she heavily hinted on it towards Adam. Which is rich coming from her. How can she call him out for his parenting when it’s her children that arrive for the family dinner completely stoned? Very good impression to make in front of both Jasmine’s family and a pastor!

Amber and Drew had forgotten about the dinner and were drowning their sorrows in booze and pot when their mom called to ask where they were. Amber was doing it because of Ryan and Drew was acting because he caught Natalie and his roommate moments after they finished having sex. He was so torn up about it that his roommate promised to never do it again.

Meanwhile Natalie doesn’t see what the big deal is. She keeps bringing up how he ditched her to spend time with his ex. But she doesn’t understand that Drew is angrier at the fact she went from him to a dumb jock than he is at her moving on. Out of all the guys; why did she pick someone close to him?

So that nice dinner Camille planned ended with a blow up when her children started acting out as if they were still little kids with temper tantrums. Adam had found out through Julia that he was second choice as godfather, Sarah just heard about the house going up for sale (it seems no one got around to telling her), and Cosby wanted to blame all of this strife on his mother-in-law for pushing them for a christening. When it’s not her fault and it’s not Julia’s fault. She felt guilty that her broken marriage had opened this particular can of worms and had taken most of the blame on herself.

Her father was so upset by it that he went to go see Joel that very night. He asked Joel what he was doing because all of this so far is not helping his marriage.

Even though the dinner was a bust, the family managed to pull themselves together in time for the baptism. Sarah apologized without saying the words – she just told her Adam and Kristina that Max can use their printer again which what started this whole to begin with. And which is now redundant because Max told his aunt he was booked all next week.

The family went through with the ceremony with no more snide remarks and at the back of the church there was Joel. He knew he couldn’t miss out on a family event. Not as long as he wants to be part of the family anyways.