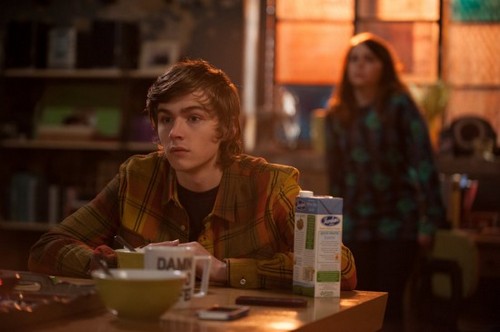 PARENTHOOD returns to NBC tonight for another interesting new episode. In “Fraud Alert,” Joel and Sarah are in high spirits after finishing their projects at work; Adam cheers up a gloomy Max by taking him on a new adventure; and Amber treats Sydney and Victor to a surprise.

On last week’s episode the Braverman’s learned that communication was key. Joel (Sam Jaeger) misunderstands where to pick up Victor (Xolo Mariduena) from baseball and old feelings of abandonment overtook his thoughts. Sarah (Lauren Graham) was anxiously awaiting a response from the ad agency on her final project. Amber (Mae Whitman) tried to talk Drew (Miles Heizer) into taking his life back. Max (Max Burkholder) went on a class trip and struggled to understand his classmates.

Julia’s marriage could finally be over and how sad for her that the only person that was willing to inform her about the demise happened to be the credit card company. They called her one night asking about suspicious charges – someone had used her card to purchase a six hundred dollar meal in San Francisco. And seeing as she knows it wasn’t her then it must have been Joel. The same Joel that wouldn’t ring up such an expensive meal by himself. So he must have had a dinner partner!

The gall of the man. He takes someone out on his joint credit card with his wife and doesn’t even have the decency to stop there. He continues to go to her family for help or in the case with Drew, he gets baby-sitting services. What does he need a baby-sitter for? It’s not like he has the kids all the time so you would think the few nights he does have the kids would be precious.

Amber had copped out because she supposedly had to work late, but she threw her brother under the boss by volunteering him to watch the kids. The kids don’t even like him and now he’s stuck having to watch them.

Yet for someone with a job, Amber tends to make enough time to be a busy body. She ran into Mr. Cyr and couldn’t stop herself from telling Sarah all about it. And then later Amber tried to help out her cousin Max. Max doesn’t want to go back to school after being bullied so bad that his parents had to come and pick him up from class trip.

Someone had pissed in his canteen and for some reason the school isn’t taking their non-bullying policy as strongly as they could have. Seeing as no one has come forward to admit to bullying Max then the school is saying their hands are tied. Max only has an idea about who could it be and that isn’t definite answer.

In the meantime the school suggests that Max stays home. There’s only a month left of school and they feel like Max could complete it at home. Well, Kristina wasn’t happy with that. It made her feel like it was her son that was getting punished just for being different.

And homeschooling isn’t as cut and dry as Adam and Kristina thought. Adam thought it would be ok to take Max to the beach for surfing lessons and although his son enjoyed it Kristina didn’t want Max associating a good time with missing school. She wants him to go back to a school setting and he won’t do that if his dad makes their arrangement now look like fun and games.

Games are merely a diversion. Zeek learned that when he took Cosby away for some quality time. It was fine in the beginning, but Cosby just had to go and ask about the house. So he was already in a grumpy mood when his deal for a new grill fell through. The owner had sold it from out under Zeek and he couldn’t handle it. He started making a scene and Cosby had to drag him out of there.

Zeek admitted to his son that this house business has made him feel like this is the end and all of it makes him feel old. He doesn’t like the situation he’s in and yet how is he going to back down on a deal he made with Camille?

Julia had honest to god found herself running around investigating what Joel has been up to. He doesn’t like to speak with her on anything besides the children so dragging her sister along; she nearly came close to demanding answers from the restaurant. They stopped before she made a fool of herself, but the question remained – who did Joel have dinner with?

So she asked him outright and he told her it was Meredith. As the story goes; they went out to dinner to celebrate the sale of their first house. Julia wanted to know if the dinner could have meant more and Joel got an attitude with her. He said he wasn’t the one that cheated… that was her.

It really wasn’t, but that’s how it feels to him. She had this thing with Ed and on top of that she couldn’t be there for him when he was willing (for years) to do that for her. That’s why their marriage was unhappy. Joel doesn’t where they’re at right now while at the same time he knows he can’t just move back in tomorrow like nothing happened.

But it’s sad that their problems are affecting their children. According to Drew, they were evil. Although Drew understands where the kids are coming from. He and Amber were just like them when their dad left and so they wanted to help Sydney and Victor.

They took them out to the skating rink to cheer them up. It was what they used to do to escape!

Hank had found about Mark being back and it had worried him. When he heard that Sarah was going to have dinner with her former boyfriend then it made him break down in front of his therapist during one of their sessions. He loves Sarah and the good doctor told him that it was time to settle the issue.

Which is a good thing too because Hank didn’t have to worry about Mark. Mark had only invited Sarah to dinner in order to be the one that told her he was engaged. He didn’t want her to hear it from somewhere else.

Hank still has a chance and so too does Ed it seems! Julia had dinner with him. Was she reacting to Joel’s comments from earlier or is this her moving on?