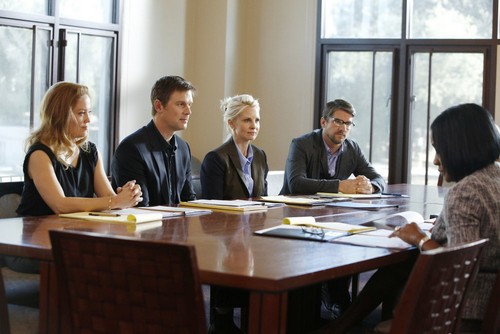 PARENTHOOD returns to NBC tonight for another interesting new episode. In “Cold Feet,” Zeek and Camille come to an agreement about the house; Julia helps Kristina and Adam but remains unsure of how to tackle issues in her own life; and Sarah intervenes after learning what her children have been doing.

On last week’s episode  Joel (Sam Jaeger) and Sarah (Lauren Graham) celebrated the completion of their work projects, but Max (Max Burkholder) had low morale after his school field trip ended with some bitter feelings so Adam (Peter Krause) took him on an adventure to clear his head. Sydney (Savannah Paige Rae) and Victor (Xolo Mariduena) were also struggling to stay positive, so Amber (Mae Whitman) tried to surprise them with a new activity. Also starring- Monica Potter, Erika Christensen, Dax Shepard, Joy Bryant, Craig T. Nelson, Bonnie Bedelia, Miles Heizer, Tyree Brown. Guest Staring- Sonya Walger and Jason Ritter.  Did you watch last week’s episode?  We did and we recapped it right here for you.

On tonight’s episode Zeek (Craig T. Nelson) and Camille (Bonnie Bedalia) finally agree on what to do with the house. Julia (Erika Christensen) jumps back into work helping out Kristina (Monica Potter) and Adam (Peter Krause), but is struggling on how to proceed in her personal life. Sarah (Lauren Graham) discovers what her children have been up to and puts her foot down with Drew (Miles Heizer). Also starring- Sam Jaeger, Dax Shepard, Joy Bryant, Mae Whitman, Max Burkholder, Tyree Brown, Savannah Paige Rae, Xolo Mariduena. Guest Staring- Ray Romano, Tyson Ritter, Zachary Knighton.

It was about time Sarah found out about Drew. It all happened when she went over to Amber’s hoping to cheer her daughter up with appliances and instead she saw that Drew had basically moved in with his sister. Which enraged her because it looked like her son didn’t even care about all the money she spent on both his tuition and his dorm.

Sarah marched her son back to school and if he doesn’t like her methods then oh well. His mother wasn’t going to let his grades slip over a girl.

So Drew returned to school with an attitude. His roommate, Berto, couldn’t help noticing seeing as Drew was throwing a bit of a hissy fit. Upon returning, he saw that Berto had used the extra space for himself and his aggressiveness could barely be called passive. Which is why Berto made Drew take part in clearing the air. He told Drew to list everything he hates about him and once Drew got started it was hard for him to finish.

Though (like Berto suspected) Drew did work his way to saying he was still upset about Natalie situation. He claims to have really liked her and Berto later told him that it was his own fault for messing things up with her – it’s not all Natalie’s fault or Berto’s for that matter.

As for Drew’s mother, she’s been actually dealing with insensitivity instead of merely imagining it.

Hank had talked it over with his therapist and he feels like Sarah had wanted him to say something when she told him about Mark. There is some history there after all. So his doctor advised him to have an open and honest conversation with Sarah. But open and honest went through Hank’s filter and ended up becoming defensive and slightly judgmental.

Sarah felt the time to talk was a little too late. She had wanted Hank to say something about her situation with Mark, but that was back when she first ended things with him in order to go after Hank. Yet he didn’t at the time because by then he had already run away.

That’s whaat got Hank all defensive. He tried to claim that he hadn’t run away and that what he was doing was purely for his daughter when they both know that’s not the full truth. And then Hank made her feel about not understanding his actions.

After hearing all of this, Hank was beginning to regret therapy. He felt like he only open himself up to more arguments. But then again Hank didn’t follow the doctor’s orders. He was told to make amends and be honest and what he did was intentionally pushing Sarah away.

It’s an old habit of Hank’s and he’s been warned about it before and you would think he wouldn’t need a reminder seeing as he’s the one that’s claiming Sarah is the love of his life. So the next time he saw Sarah, he did what he was supposed to do – Hank apologized and finally acknowledged her feelings.

It wasn’t much but that was what she needed. If Zeek could do it then there’s no excuse for anyone else. He never wanted to move and yet he signed off anyways because it was what his wife wanted. Then as luck would have it – Camille had begun regretting her ultimatum when it came time to pack. She had so much stuff and each piece carried some sort of sentimental value to her.

That’s the problem with downsizing. Sometimes you have to give up stuff and Camille was afraid their next house wouldn’t be able to hold everything. And again Zeek came through for her. He looked for and found the perfect house. Not for himself, but for his wife.

It’s a lovely house and Camille loved everything about it. And as for Zeek, he’ll grow accustomed to whatever his wife wants and she knows that.

Meanwhile Cosby and his family came very close to being homeless. The cleaning crew found more mold and he needs to find a place for his family to stay while the mold is getting cleared out again. However there is one problem he has to immediately deal with – how is he going to pay for the 12 extra grand the mold in the floor is bound to cost him?

He can’t go to Adam for a loan. Not only does Adam not have that type of extra cash, but their business recently put all their slush fund into marketing Oliver Rome and his band.

Oliver wasn’t even grateful about it. The guys found his a great deal of front running for a pop band and he all could say was that he didn’t want to be a sellout. He did cave although it took a lot of pressure from both Adam and Cosby.

They want to start making the money rather than just peanuts they’re getting now.

Adam and Kristina’s charter school is going through and that’s pretty much due to Julia’s involvement. She’s been helping them with the paperwork and she was the one that also convinced Max’s former teacher to step in as a Headmaster. Or Evan as he’s asked her to call him.

Things didn’t go as planned with Ed. Julia thought she was ready to sleep with him when really she wasn’t. So she put the brakes on her relationship with him and then afterwards she ended up sleeping with Evan.

Does she have feelings for him or is just running away from yet another relationship?