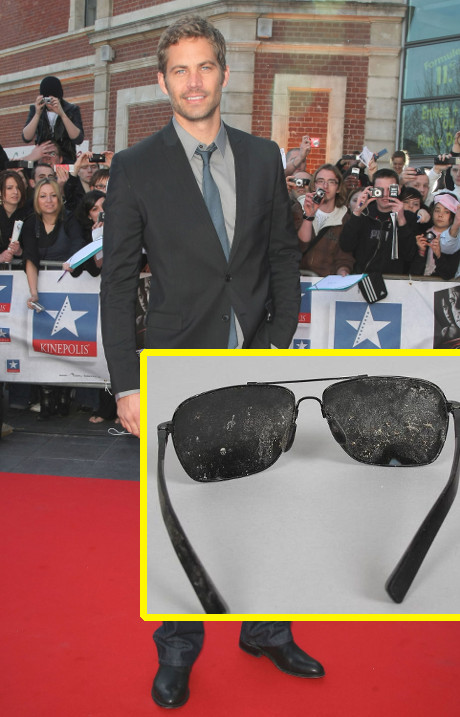 The entertainment industry is still reeling from the untimely death of Fast and the Furious star Paul Walker after he was involved in a fiery car accident nearly four months ago. A certain anonymous celebrity memorabilia collector has clearly already made it through the grieving process though and is currently trying to sell the sunglasses the late actor was wearing when he died.

An auction emerged on BidAMI.com today. An anonymous user put a pair of charred sunglasses up for sale and claimed they were the ones that Walker was wearing in photographs moments before his accident. According to the BidAMI auction, the seller witnessed the accident. After the police had the accident cleaned up and took down the yellow tape, the seller went over to crash scene and began sifting through what was left of the rubble.

He claims he picked the sunglasses up, unsure of whose they were, and headed home. A few days later he saw photographs taken of Walker as he was leaving the charity event, just seconds before the car accident, and realized he was the wearing the sunglasses he had picked up from the debris.

As of this afternoon the sunglasses were up to $1,572.00. After checking the auction status earlier, we learned that the site has either crashed from all the traffic or the anonymous seller had some reservations and pulled the listing. Considering all of the backlash the website has received today for the inconsiderate and morbid auction, it wouldn’t come as a shock to us if they decided to take down the item so save face.