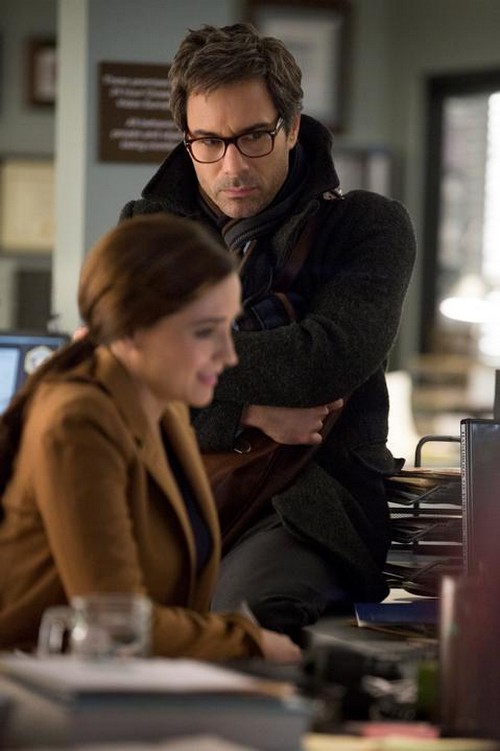 Tonight on TNT after the Fall hiatus PERCEPTION returns with a whole new episode called, “Brotherhood.”  On tonight’s episode Lewicki’s brother is named a prime suspect in a homicide case. Meanwhile, Lewicki receives a tempting offer, leading him to question Pierce’s loyalty to him.  Did you watch last week’s episode?  We did and we recapped it right here for you.

On last week’s episode with the help of his hallucination, Hall of Famer Mordecai“Three Finger” Brown (guest star Brad Beyer), Pierce fought for an autistic teen under interrogation for murder. Meanwhile, Dean Haley turned on the charm in order to convince a neuroscience prodigy (guest star Kenny Ridwan) to attend CLMU.

On tonight’s episode Pierce and Lewicki are caught off guard when Lewicki’s brother Kenny (guest star Chris Meyer) shows up unannounced. In an unwelcome turn of events, Kenny is named the key suspect in a homicide case, leaving Pierce torn between helping a friend and serving justice. Meanwhile, Lewicki is approached with a tantalizing offer that makes him question Pierce’s loyalty to him.

Tonight’s Perception Season 2 episode 12 is going to be exciting, and you won’t want to miss it. So be sure to tune in for our live coverage of the new episodeof Perception — tonight at 10PM EST! While you wait for our recap, hit the comments and let us know how excited you are about the show. Don’t forget to come back at 10PM for our LIVE recap!

Tonight’s episode begins with Pierce talking to his class about how society must follow rules and have a good moral code. He asks students to question whether morals are innate or something learned over time, with the influence of those around us. Shortly after class, Lewicki is surprised by the Dean’s request to see him. He nominated him for a one-year fellowship that Max is very excited about. When Lewicki questions how Pierce will get along without him, the Dean tells him he will need to think about that. He does not want him to miss the opportunity.

Later that night, Pierce arrives home and Lewicki tries to find out through a few simple questions, whether or not Pierce would be okay without him around. That doesn’t go over well. Inside, Pierce senses an intruder and walks into the kitchen with a baseball bat. He sees someone and the person drops a glass of milk upon seeing Pierce with a bat. Running up behind Pierce is Max, explaining the intruder is his own brother Kenny. He is shocked to find him there and asks what is going on. He cannot get much out of him as to why he is visiting. Max asks if Kenny can stay the night. The brothers are 12 years apart and were split up when they were young. Max explains to Pierce that he was adopted to the Lewickis while Kenny has been in foster care for years.

When Kenny and Max talk, Kenny shares his desire to move to California and tells Max he already has a plan. He quit school and tells Max he wants to be a welder. Max tells him that he is only 16 and too young to make these decisions.

The next morning, Pierce is working, Kenny is sleeping on the couch, and Natalie comes to talk. They are interrupted when the police come over as they are warning all neighbors that there have been some break ins in the area and a young black male around 16-18 years old was spotted. Pierce lies and says he has not seen anyone matching the description. Pierce tells Max about the visit and Max jumps to defend Kenny.

Later, Pierce asks Moretti to do a little background check on Kenny. She sees that he is wanted for murder and tells Pierce she has no choice but to report his whereabouts. They arrive at Pierce’s house to find the FBI already there, but they are cuffing Max, not Kenny. After Moretti explains their error, they find that Kenny went out a window. They decide to take Max in for aiding and abetting because of the way he’s defending his brother-they believe he likely knew something . Moretti promises to take care of Max as he is taken away. Moretti and Pierce are waiting for Max outside the station and talk to him once he’s released. They give more information about why Kenny was wanted. Max is heartbroken to find out. Max goes to visit his foster family and Pierce tags along. The family gives some information about friends Kenny has.

They finally catch up with Kenny and Max encourages him to turn himself in. He does and meets with Moretti and Ryan to tell his side and give details that lead the team to bring in the person Kenny named as the shooter, in for questioning. Darius, the person named, has a solid alibi. Pierce visits Kenny in jail and asks a lot of questions. Pierce comes up with an explanation. He believes the stress Kenny felt caused him to hallucinate that someone else committed the murder, when in fact, he did it. Though Pierce is trying to help and his testimony could reduce any sentence, Max is not ready to believe his brother had anything at all to do with the murder.

Back on campus, Max tells the Dean that he accepts the fellowship and wants to be assigned to a different professor immediately. After the Dean asks why, they have a heart to heart, and Max realizes he is being unfair to Pierce. Meanwhile Pierce and Moretti visit a restaurant about a lead. He is a witness to the murder. They bring him in to look at a police lineup. He pics Kenny from the lineup. Later he shares that he picked Kenny because of the way he wears his shoe strings. He showed brother Max his unique shoelace style at the beginning of the episode,

Max visits Kenny and Kenny confesses to murder. Max meets up with Pierce and tells a story about their past. He remembers Kenny taking the blame for something he did not do when they were children. Pierce realizes Kenny is protecting his brother now. Max replies that Kenny has no need to protect him. Pierce counters that Max is not the brother Kenny is protecting.

Max visits Kenny’s friend again. Max confronts Charlie and tells him he knows it was him and Kenny is protecting him. He tries to persuade him to come forward. Charlie goes through all the details of what happened and explained he only did what he did to save Kenny. Max asks Kenny to move in with the Lewickis once this is over. Max tells the Dean he no longer wants the fellowship. Charlie turns himself in and Kenny is set free.