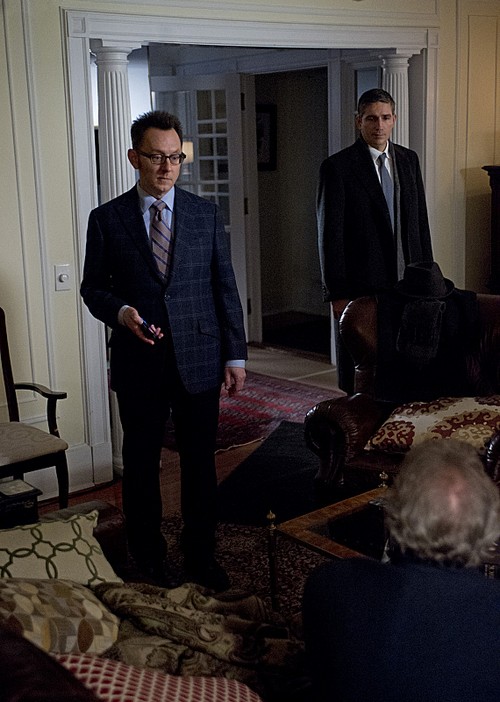 PERSON OF INTEREST returns to CBS tonight for another exciting episode.  In “Death Benefit,” Reese goes undercover as a Secret Service agent in order to protect a U.S. congressman who may play a pivotal role in the plan to bring down Decima’s second Machine.

On last week’s episode Reese and Shaw posed as alumni at a high school reunion in order to keep eyes on the latest POI. Meanwhile, Finch and Fusco traveled to Washington, D.C., to investigate the motivations behind Vigilance’s latest attack.  Did you watch last week’s episode?  We did and we recapped it right here for you.

On tonight’s episode Reese poses as a Secret Service agent to get close to the latest POI, a U.S. congressman who may hold the key to derailing Decima’s plans to bring a second Machine online.  The episode was written by Lucas O’Connor and Erik Mountain.

Tonight’s PERSON OF INTEREST Season 3 Episode 20 is going to be exciting, and you won’t want to miss it. So be sure to tune in for our live coverage of the new episode — tonight at 9 PM EST! While you wait for our recap, hit the comments and let us know how excited you are about the show.  Don’t forget to come back at 9 PM for our recap!

The world’s media is still reacting to the released documents on government surveillance. So right about now Control must be losing it. They had to suspend all missions with Northern Lights and pretty soon they’ll know about the Machine, Finch’s Machine, and how it’s still up and running.

But as of now they have bigger problems. The people involved with the top secret project are all currently denying any involvement and they’ve left Control to deal with the fall out on their own.

However Senator Garrison won’t find it easy walking away from one the biggest Modern day scandals. His name was on a list and Decima threatens to reveal his true involvement with the project. That is unless he helps them. Decima had secretly approached Garrison about setting up a new surveillance system. The head of the secret organization claims to have something even better than Northern Lights. His machine listens and obeys. So whoever they need to find would become readily available with just a few keystrokes.

And that tempted the Senator. The Government does need a new ultra spy camera. Especially seeing as the one they currently have has been decommissioned.

The overflow of both the relevant and irrelevant numbers is being handled by the POI, but for how long? Root had to collect Shaw to take care of a mission in Miami and that left Reece in charge of their newest number.

He flew out to meet up with Finch in Washington D.C. where he learned that they had to save U.S. Congressman McCourt. McCourt was one of the biggest defenders of open involvement with the public. So he’s pretty popular up there on Capitol Hill with this recent upheaval over Northern Lights.

Reece went in as one of McCourt’s secret service detail. They were trying to figure who would harm the congressman, but were left stumped by who could it be. For all appearances – the congressman proved to be a popular and well rounded guy. And even though he ran into the occasional squirmish with a union boss he was still able to wiggle himself out of any problem.

So his case wasn’t as clear cut as their normal cases went. Although Finch did have one or two hypothesizes. He thought that it could be Decima that’s behind the threat on McCourt’s life.

Finch reckoned they wouldn’t want a guy that big on government involvement hanging around. Not when they’ll soon be introducing the “Samaritan”. And so when Decima did show up, the guys did their very best to get McCourt away from them. Though they shortly learned that McCourt wasn’t what you would normally call a victim.

McCourt is actually working with Decima. He knew the government needed a sure fire way to target terrorist and as long as Decima is public or claims to go public with their finds then it works for everyone. They’re also paying him by the way and he’s corrupt as hell.

Shaw arrived just in time after that.

By that point both Finch and Reece knew that if the congressman lived then the “Samaritan” would be up and running before long. So they needed Shaw to help break a tie so to speak. Reece thought they should be the ones that killed McCourt and Finch didn’t think they should take such drastic measures. He felt that was moving too far away from their doctrine.

But the Machine did give them McCourt’s number and that has to mean something. Shaw even thought so yet she’s changed since joining the team. A few months ago she would have been the first to shoot this guy and now her conscience is getting in the way. And that’s really all down to Reece and Finch.

They were the ones that taught her to do more than kill and she reminds them of that. So they ended up choosing, as a collective, to let the congressman live.

The rescue team arrived for him while the guys were getting away and Shaw was injured in the process. Which means they arrived in New York already down one man when Finch disappeared on his friends. At first it was a mystery as to why, but back in DC, Decima got the necessary approval they needed with the congressman to run their program. And to great surprise the only thing they demanded in return was all surveillance cameras in NYC.

Decima is actively hunting Finch and so he left his friends before they could get caught with him.Finch ran to give his friends a chance, but how long are they going to survive on their own without him or the Machine?