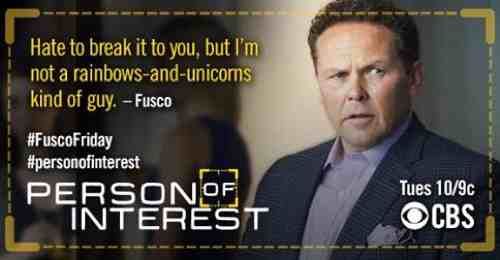 Tonight on CBS Person of Interest returns with an all new Tuesday October 7, season 4 episode 3 called, “Wingman.” On tonight’s episode Finch [Michael Emerson] asks Fusco [Kevin Chapman] to keeps tabs on a professional wingman whose number has come up. In other events, the Machine sends Finch and Root on an unusual errand; and Reese tries to toe the line at his new day job.

On the last episode although Finch insisted that he no longer wished to help with new numbers, his interest was piqued when Reese learned that the newest POI was a brilliant college student engaged in a mysterious. Did you watch the last episode? If you missed it, we have a full and detailed recap right here for you.

On tonight’s episode Finch recruits Fusco to stick close to the latest POI, a professional “wingman,” but learning how to approach women soon becomes the least of his worries. Meanwhile, Reese must find a way to play by the rules at his new day job as the Machine sends Finch and Root on a mysterious errand.

The team’s newest number is proving to be difficult to like. At least on Fusco’s end. Their person of interest is a professional wingman and though it’s his job to help guys come off as likable – the wingman, Cooper, needs some help with his own people’s skills.

In the first five mints of their association, he managed to insult Fusco three ways from Sunday. Fusco is pretending to be a potential client and so when the poor guy walked in, saw Fusco, and realized he was really going to have to work for this particular commission – he relayed to his client all the way they cut days out of their preparation. Like Fusco actually putting in an effort on his appearances.

Fusco was mercifully able to hold onto his temper, but Cooper kept pushing his buttons. He got Fusco a whole new wardrobe and then tried to get the other man to open up about his feelings. As if a tough guy like Fusco was ever going to talk about what he’s feeling. It seems Cooper is a romantic or so he claims which is rich coming from him seeing as one of his former clients complained about Cooper sleeping with his wife.

It’s bound to be pretty hard finding love in someone else’s marital bed.

Though stepping on someone’s toes isn’t new for Cooper. While he and Fusco were out enjoying drinks – they ran into a guy that wasn’t all that happy to find Cooper flirting with his girlfriend. So the boyfriend came charging at the guys and Fusco had to go all NYPD on him. He knocked their assailant to the floor and even flashed his badge.

Then when the drunk boyfriend was finished being dealt with – Cooper demanded answers. Why did Fusco lie to him about his job. But Shaw got in touch with him before Fusco could do something stupid like admit to the truth. She found something in Cooper’s background that could mean he’s a perp and not a potential victim. So until they figured out which one he is – Fuso has to maintain his cover.

Hence he continued to follow Cooper’s orders and flirt with anyone he saw. All the while pretending to not to enjoy it. Reece on the other hand didn’t get to enjoy being a part of this mission because following Fusco to swanky bars and art galleries was a job given to Shaw. Though Reece couldn’t have gone even if he begged.

Lately, his day job with the police department has had to come before his real job. His boss had been on his ass about closing cases and proper police procedure. So Reece couldn’t afford to take time off in the middle of the day. Not for an investigation off the books anyways.

Finch and Root were off doing something else that was probably illegal on several fronts so for the most part Shaw and Fusco were on their own for this mission. And that’s messed up when it turned what they really needed was backup. Some men had come for Cooper and the two of them just weren’t enough.

Cooper’s friend from back in the day had kidnapped him and because Fusco was there – he was kidnapped as well. As for Shaw, she ended up needing Reece to bandage her. Which he did right before he rushed back to work.

Thankfully his investigation eventually led to a shady dock worker. Cooper knew the men on the docks because he used to work there himself. And his old friend still works there but under a different capacity.

Cooper had known his old friend was running with the wrong people nowadays (like gangs) and it looks like he might have known too much. The DA had approached him about testifying against his friend. Yet Cooper wouldn’t do it. He still wanted to be loyal.

But his friend didn’t want to return the favor. So he was going to kill Cooper and Fusco. And his plan on letting them die inside of a container would have worked too if Shaw and Reece hadn’t showed up to the rescue.

Reece and Fusco were given a “job well done” by their boss. They closed a case and Reece was kind enough to pick up a knock handbag for her. Though she then commentated on something strange that happened while the guys were out of the office. She mentioned a few mafia members were all shot in the knees (something Reece would have done if he had been there) before someone called in a random tip on where to find these them.

That someone was Root. She and Finch nearly carried out a deal with the Mafia but at the last minute betrayed them and stole all their money. The Machine wanted to help the team out and seeing as Finch couldn’t access any of his own money – the Machine provided a strange opportunity.