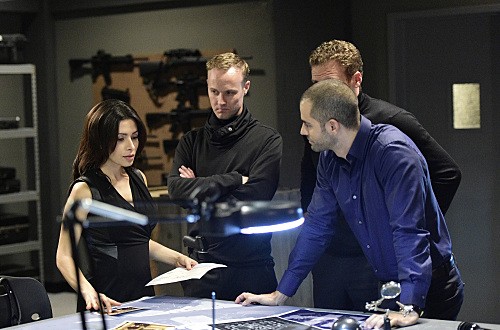 Tonight on CBS Person of Interest continues with an all new Tuesday November 11,season 4 episode 7 called, “Honor Among Thieves.” On tonight’s episode Shaw risks being detected by Samaritan when she joins a team of international thieves to monitor the latest POI. Meanwhile, Finch [Michael Emerson] and Root [Amy Acker] go on a dangerous sabotage mission.

On the last episode Reese, Shaw and Fusco had to protect a unassuming office worker who stumbled into a dangerous conspiracy while moonlighting as fake detective. Meanwhile, Finch traveled to Hong Kong as part of his academic cover identity. Did you watch the last episode? If you missed it, we have a full and detailed recap right here for you.

On tonight’s episode as per the CBS synopsis, “Shaw joins a team of international thieves in order to keep tabs on the latest POI, but an unexpected turn of events puts her in danger of being detected by Samaritan. Also, Finch and Root undertake a dangerous sabotage mission.”

Tomas Koroa is an international wine dealer and on tonight’s episode he also the POI. Not that Shaw is going to let a trivial thing like that stop her from ogling him as much as she wants.

For some unknown reason, Tomas seems to interest Shaw. As she grew bored of following him around from one restaurant to the next – she actually started to take pictures of his body simply to amuse herself. Luckily, though, her observation did finally lead to something other than getting her rocks off.

While she was doing surveillance, Shaw had witnessed Tomas and his crew pull off a highly successful heist on a jewelry store. It was so clean and well done that it couldn’t have been their first job. And it wasn’t! Finch later found out that particular heist was just another notch is Tomas’s seven year long career.

In fact, in all of Tomas’s years of doing jobs, there was only one crew member of his that ended up getting caught. And that one man soon died under mysterious circumstances while in prison. So, unfortunately for Shaw, it’s looking more and more likely that Tomas isn’t a victim. He might very well be a perp.

Meanwhile, as Tomas was wreaking havoc with Shaw’s libido, Root and Finch were actually doing some real work. They’ve been seeking out ways to undermine their newest Samaritan picked governor. The Governor of New York has recently handed over a large chunk of money to a private charity that no one has ever heard of before. So Root had gone in undercover as a nanny.

But she was nearly caught in the act by Samaritan. When she was at the charity organizer’s house – Samaritan had hacked her cell phone and was stealing data off of it. So Root was forced to abandon her cover and because Finch thought it was wise to keep her off of the streets for a while – he sent Root to watch over Shaw.

To get in with Tomas’s crew, Shaw had to audition for a job. Which meant she had to be tested out in the field.

Root kept watch but Shaw was able to hold her own and pulled off her trial heist. However the real thing turned out to be much more complicated. Shaw and Tomas were breaking into a vault and what they found inside wasn’t the jewels they were expecting.

It seems someone had hired to Tomas to steal a very dangerous disease from a CDC worker that had knowingly taken some vials against her bosses’ orders. If Tomas had known the full story then he would never have stolen the vials. And the person who hired Tomas knew that about him. Hence, Tomas’s own men were ordered to kill him the second they got their hands on the vials.

But no one had counted on Shaw being there. She saved Tomas from his own men although to do so she was unable to get her hands on the vials. Also, she kind of let Tomas in on her secret. He started to suspect she wasn’t who she said she was after he had overheard her talking to a third and invisible party.

So Shaw had to first reassure him that she wasn’t after the vials to use them. She wanted to return them to the proper authorities just as much as he did. Though her methods might be a tad different to what he’s used to.

Once Shaw realized Tomas wasn’t the perp they all though he was – he became fair game again. And she probably would have pursued what little time they had together but finding the missing vials proved to be more important.

To get the vials, Tomas and Shaw had to go through a few people. And one of them turned out to be the same man Tomas used to have on his crew. The one that that had allegedly died in prison. As it happens, Tomas’s former partner faked his death in order to extract revenge against all his friends he believed had left him in prison to rot.
What he didn’t know was that they were planning on breaking him out but he had “died” before they could enact their plan – so the joke is on him.

He turned the other partner against Tomas with the promise of money. Yet he killed them the moment they handed over the disease. Then, when he learned Tomas was still alive, he was going to use it against Tomas. But a shoot-out between Reese/ Fusco and command allowed Shaw to get the better of her captors and steal back the vials.

So Shaw and Tomas were leaving with what they came for when a command agent nearly got them. The agent used to know Shaw back in the day. She was actually his mentor so he allowed her and her friend to escape. And then he tried to delete all footage of helping them.

Though as we know, nothing stays deleted for long!