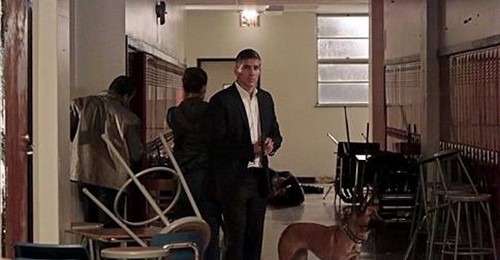 Tonight on CBS Person of Interest continues with an all new Tuesday November 18, season 4 episode 8 called, “Point of Origin.” Tonight, Reese [Jim Caviezel] volunteers to be an NYPD police academy instructor to keep an eye on a young officer whose suspicious actions make him question her motives. Meanwhile, Martine gets information from Samaritan and hunts a member of the team.

On the last episode Reese, Shaw joined a team of international thieves in order to keep tabs on the latest POI, but an unexpected turn of events put her in danger of being detected by Samaritan. Also, Finch and Root undertook a dangerous sabotage mission. Did you watch the last episode? If you missed it, we have a full and detailed recap right here for you.

On tonight’s episode as per the CBS synopsis, “Reese volunteers as an NYPD police academy instructor in order to keep an eye on a talented young officer whose suspicious actions make him question her motives. Meanwhile, Martine – armed with information from Samaritan – hunts a member of the team.”

Reese had volunteered to run the recruit instructing programs. And his new friend Dr. Iris Campbell, the very same shrink Reese was forced into seeing, had even acted as his endorsement. Apparently she had felt bad about his pending IA investigation and wanted to give him something to do so he wouldn’t be kept inactive.

And Reese played on that. He needed to be near the newest POI and he wasn’t afraid to use Iris’s borderline inappropriate feelings for him to do it.

The POI, Dani Silva, is a star recruit. She’s been excelling at everything she does. And yet it’s most unusual of someone like her. All of her life, Dani has been average. Never excelling but never underachieving as well. So at first Finch was willing to give her the benefit of the doubt.

So then everyone concluded she must be a spy. However Shaw and Fusco didn’t figure out how wrong they were until after they had busted into her apartment. They had found out that Silva was already a cop. It seems she’s a plant from IA. There’s an actual mole inside of the recruits and it was Silva’s job to root him out.

Although someone had found out about her prior to her finding out about them. Shooters ended up targeting Silva. Luckily, Reese had been following her so he was able to rescue her out of a tricky situation. But he was unable to help when she truly needed it.

Silva was deep undercover for IA. Her files have been erased from the official NYPD database because her handler didn’t want to risk anyone finding it but once he was murdered – there also wasn’t anyone to able to identify Silva as a cop. Someone had killed her handler using her own gun. And later money was put into a fake account using her name.

So it didn’t matter what she said. No one would have been Silva’s story if she tried to come clean with the NYPD. At best, they would have thought she was mentally unstable.

The recruit Silva was hunting down was one of the brotherhood’s guys. Dominic had wanted access to police files in order to learn everything he could about Elias. Elias has been a thorn to his side for quite some time and Dominic is in the midst of creating some kind of grand game plan to take him down. Hence his need for information.

Why bother look for it yourself when the police have already done the grunt work!

He got to one of the recruits and forced Ortiz to work for him. He used Ortiz’s uncle who was awaiting jail against him and then when he got what he wanted – he arranged to have Ortiz murdered. But you see Silva needed Ortiz alive. He’s the only one that can clear her name and to get to him – she and Reese were going to have to break into a heavily forfeited old school building.

So they took the dog and couple of explosives with them when they broke Ortiz out of what he thought was protective custody. In the end, he knew they had saved his life (the gang was going kill him for being redundant) and so he returned the favor. He helped get Silva her job back.

She’s a good cop and it looks like she has a bright future. And yet the danger isn’t over. Not only did Ortiz’s breakout clue Dominic in about the man in the suit interfering with his business again but there’s another threat on the horizon. Samaritan had sent in an assassin. This woman has slowly worked her up a criminal ladder just to locate Shaw.

And in the last five minutes of the show – she found her!