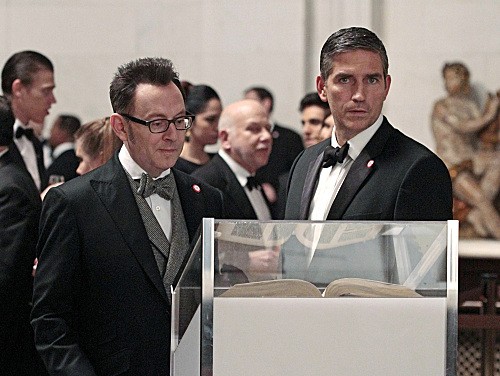 PERSON OF INTEREST returns tonight on CBS with a whole new episode called, “Provenance.”  On tonight’s show a surprising turn of events finds them planning a heist which could land them all in jail.  Did you watch the last episode?  We did and we recapped it right here for you!

On last week’s episode Reese boarded an international flight in an attempt to put the team and the past behind him, but was angered when he realized his travel plans have been manipulated.

On tonight’s episode Reese rejoins Finch in New York, but when the team receives the number of a highly skilled antiquities thief, a surprising turn of events finds them planning a heist which could land them all in jail.

Tonight’s Person of Interest Season 3 Episode 14 is going to be exciting, and you won’t want to miss it. So be sure to tune in for our live coverage of the new episode of Person of Interest — tonight at 9PM EST! While you wait for our recap, hit the comments and let us know how excited you are about the show. Don’t forget to come back at 9PM for our LIVE recap!

Reece is back from his little hiatus but if he was expecting a welcome back party then he’s sorely mistaken. They’ve gotten a new number and there’s no time to waste. Their latest goes by Kelly Lynn. She entered the country on a work visa. She’s a Professional Event Planner. What better way to meet an even planner than go to one of her events – Finch has a plus one and Reece happened to draw the short straw.

His tailor in Italy was able to upgrade his wardrobe just in the nick of time. Reece had his suit fitted to a tee but guessing no one thought Shaw would put in the same amount of effort. Finch’s jaw dropped a little when he saw Shaw pull of a tight little White cocktail dress.

Another person full of surprises is their number. Shaw arrived to the museum event before the gentlemen and she watched Kelly at work. The woman appeared to be charming and fully competent at her job. Shaw couldn’t see why anyone would want to hurt her. But there were holes in Kelly’s story. For one, Shaw couldn’t place her accent in any one region. Kelly tried to explain that she traveled all over and that’s why she doesn’t sound fully Chinese. And yet she still side step the original question.

The men were only newly arrived at the party when suddenly the lights went out and the museum flooded up with smoke. Shaw and Reece went to investigate the smoke leaving Finch with the artifacts. Thereby giving Finch the perfect visual. He saw someone robbing the museum and warned his people. Shaw followed the thief and ended up confronting Kelly. She arranged her whole event to rob the place.

Kelly got away from Shaw. She made sure to use the nervous and scared crowd to her advantage but losing Kelly wasn’t only Shaw’s problem. There was an Interpol agent also looking for her. He traveled all the way from France to capture Kelly. Not only is she a notorious thief but she’s also a killer.

Finch managed to track Kelly down while she was making a meeting with whom they believe to be her employer. He wanted Kelly to steal one more thing for him within the area. As it turns out it was the original Guttenberg Bible. Finch wanted Shaw to stop Kelly before she could get her hands on it and Shaw did. Unfortunately, it was at a high price.

Kelly isn’t her real name. Her real name was Ming Lee and she was a gymnast. As in an award winning Olympic gymnast that is until she was abruptly kicked off the team several years ago. Kelly was forced to leave once her coaches realized she was pregnant. She did go on to have the baby but then found herself broke. That’s when she turned to stealing. Only she stole from the wrong people and now they’ve got her daughter, Kaia. Their holding her Kaia’s life over her head while getting her to steal for them.

As for the murders; she swears she doesn’t know anything about those. The man she worked for her probably committed those as way to tie up loose ends.

Finch wants to help her. He knows they can’t travel across the world in time to rescue Kaia but they can steal the bible for her. Even Shaw was taken aback by his response. Finch isn’t usual the guy willing to bend the law. Typically, that’s her.

The bible is tightly guarded. They’re going to need everyone to break in. They called in Fusco to get the building’s blueprints. However he has a much bigger part to play later on. Fusco has to be the one to call in Interpol.

They need to get to get Frenchie sidetracked. So Agent Bouchier got a call from his NYPD “liaison”. He was given Kelly’s location along with insight on what her next target will be. Unbeknownst to him, he played his part well. He warned the security team protecting the bible and waited to catch her in the act.

How was he to know that her new friends offered her up the perfect decoy?  Reece was supposed to get caught breaking in. That way when the security team dismantles the alarm it would give Shaw and Kelly all the time they needed to actually steal the bible. Agent Bouchier warned the guards too late. They thought they had their guy and he informed that no he was looking for a female thief. By time they caught on, she had escaped with literally one of the most expensive bibles in the world.

The game wasn’t over though. Kelly gave the bible to her employer and tried to bargain her way from out under his thumb. But he was never going to let her go. Not as long as he had her kid. Which is why it they were lucky Reece wasn’t sitting around leaving all the real work to the women. During their break in; he must have caught a flight because he was able to reach Kaia. He broke her out of her holding cell.

They had removed the threat but they needed to take down Kelly’s boss.

Finch and Shaw kidnapped Agent Bouchier. They wanted him to listen in on Kelly’s meeting. They thought it was in the agent’s best interest to learn the full story behind her robberies. Like how she was forced from the very beginning to do this job. The agent called in NYPD to arrest both Kelly and her employer. Their two biggest fishes he’s ever caught and he’s going to get a lot of praise when he returns home but he’s not heartless. The agent “dropped” the key to Kelly’s handcuffs. At the end of the day he knew she wasn’t one of the bad guys and it’s not like anyone can blame him for an escape artist making an escape now can they?

With her new found freedom, Kelly can’t go back to stealing. Not if she wants to make a fresh start with her daughter.

Whereas the rest of the team feel proud about all they’ve done. Maybe touch too much. Fusco thinks they can become thieves and Finch suggests they steal diamonds rather than gold. Gold is too inconsistent on the open market. But Reece wasn’t playing along. For him, all he can remember is that someone is missing from their team.