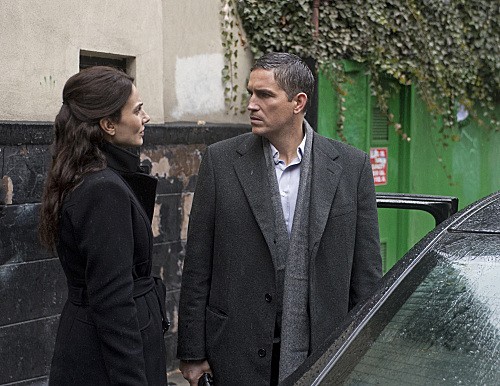 PERSON OF INTEREST returns tonight on CBS with a whole new episode called,“RAM.”  On tonight’s show FThe secrets of Finch’s operation before Reese joined him are chronicled, including revelations about ties to current events.   Did you watch the last episode?  We did and we recapped it right here for you!

On last week’s episode Finch went undercover in an emergency call center to protect a 911 operator, but it soon became clear that the threat reached further than the team could have anticipated.

On tonight’s episode the secrets of Finch’s operation before he enlisted Reese are revealed, including shocking ties to present-day events.

Tonight’s Person of Interest Season 3 Episode 16 is going to be exciting, and you won’t want to miss it. So be sure to tune in for our live coverage of the new episode of Person of Interest — tonight at 9PM EST! While you wait for our recap, hit the comments and let us know how excited you are about the show. Don’t forget to come back at 9PM for our LIVE recap!

Prior to Reece  joining up with Finch there was Dillinger. As in far back as 2010, Dillinger acted as Reece’s predecessor in Finch’s underground organization. That doesn’t seem like all that long ago and that’s because it isn’t. There’s an explanation behind Finch always being  adamant about protecting his people and Dillinger could very well be the reason why.

He was cocky. Possibly cockier than Reece has ever been on a good day, but he was also really sloppy about staying professional. Dillinger would recue a beautiful woman and ride the coattails of her gratefulness all the way to the bedroom.  Finch didn’t exactly approve of the way his partner chose to conduct himself yet at the time he was all Finch had.

Then everything changed because of one case.

A new number came up by the name of Daniel Casey. He was tech genius that would usually get hired on for certain projects. Daniel would get paid by companies to test out their security systems. It was his job to spot any and all weaknesses they should look out for. And unfortunately for him, he was approached by the government to break in to a complex computer. Daniel had no idea what he was getting into when he was hired on to break into the Machine’s mainframe. All he was told was that he was testing its security like his other jobs.

But he wasn’t and he caught on to what he was really hired on to do. Control wanted him to crack the security so that they could get in and use the Machine. Once he realized what he was doing he tried telling them he was out and in return they tried to kill him. He escaped them the first and wisely thought he should get help to escape them for good. So he sought out a different government agency believing they could possibly help.

Yet it wasn’t an agency man that came to the meeting.

It was Dillinger’s job to protect Daniel from the people that wanted to hurt him but it was a tough job figuring out who all the players were. There were the CIA agents after him, which just happened to be Reece and his partner Kira, and then there were the people that showed up for the meeting. Finch identified who Reece was with but he couldn’t figure out who the third team belonged to.

The hacker though was smart to pick on who can and can’t trust. Daniel suspected whoever it was he met was lying to him and was close to making a run for it when everyone decided to act all at once. Dillinger moved in to protect him while Reece tried to extract him. Reece had the upper hand however he couldn’t keep his gun aimed at Dillinger at the same time the third team started firing at him.

Everyone was able to walk away somewhat safe but Dillinger started to have misgivings over what he signed up for. This case wasn’t like any other case he went on for Finch. Dillinger was used to dealing with things on a much smaller scale so having several armed men come close to killing him didn’t what we would call sit well. He carried through the plan of protecting Daniel by bringing him to Finch. Which, as he knew full well, would make Finch equally unhappy.

Not a lot of people knew about his hideaway and his partner risked all of that so he could demand answers in person. Dillinger wanted to know what was going on because he no longer wanted to be fobbed off over what he was risking everything for. And yet Finch still wouldn’t tell him about the Machine. This proved to be his first mistake with creating his team.

Refusing to trust his partner made his partner not want to trust him. Dillinger left a bug in Finch’s office and with it he overheard Finch and Daniel talking about why so many people what to kill him. Daniel did find a way into the Machine’s mainframe. He created a program that would let him into a back door.

Dillinger heard everything and realized how best to use this to his advantage. He wants an easier life. Preferable one on the beach with a fully funded bar.

Dillinger drugged Finch and stole all of Daniel’s coding but thankfully he stopped short of killing anyone. After all he got what he came for. So he allowed Daniel to make a run for it. Leaving him to try and broker a deal for the computer.

Finch had warned him not to do it. He told Dillinger that they would kill for even having something to do with the Machine. Too bad the other man wouldn’t listen. Because Control did send in a second team to clean up after Reece. They sent in Shaw who promptly took care of Dillinger and most of his buyers.

One of them got away though and he was able to take Daniel’s computer with him. Control didn’t like that. That was the first black mark against Shaw. Seeing as they lost the computer the head of the operation saw the whole mission as a failure even though Reece called in that he killed Daniel. He didn’t but they don’t know that. As far as they are concerned he made one mistake and Control is willing to kill him for it.

Reece let Daniel live and lied to his partner about it because he said Daniel didn’t like a traitor to him. So Daniel got to run away again. He ended up finding a safe cabin out in the middle of nowhere only to then be found out by Root in 2014. She needs his help in tracking down everyone that proves a danger to the machine.

Wonder if they’ll run in with their old friends back in New York.