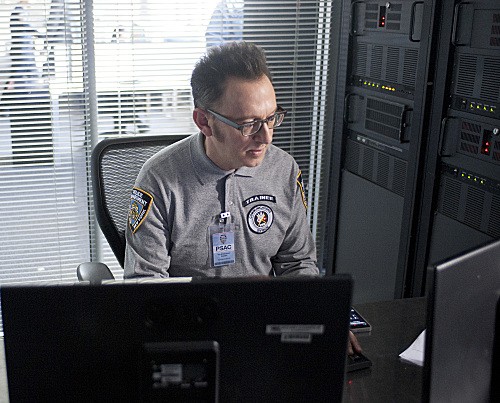 PERSON OF INTEREST returns tonight on CBS with a whole new episode called, “Last Call.”  On tonight’s show Finch infiltrates an emergency call center to keep tabs on a 911 operator, but he quickly learns that the case is more complicated than he originally thought. Did you watch the last episode?  We did and we recapped it right here for you!

On last week’s episode Reese rejoined Finch in New York, but when the team received the number of a highly skilled antiquities thief, a surprising turn of events found them planning a heist which could land them all in jail.

On tonight’s episode Finch goes undercover in an emergency call center to protect a 911 operator, but it soon becomes clear that the threat reaches further than the team could have anticipated.

Tonight’s Person of Interest Season 3 Episode 15 is going to be exciting, and you won’t want to miss it. So be sure to tune in for our live coverage of the new episode of Person of Interest — tonight at 9PM EST! While you wait for our recap, hit the comments and let us know how excited you are about the show. Don’t forget to come back at 9PM for our LIVE recap!

The team has a new number but they can’t understand why anyone would want to harm her. Sandra is a 911 operator and she seems to be pretty competent at her job. Finch had to gone undercover to monitor her and even he can’t see what illegal activities she could be up to. That’s why he tried to enlist Fusco’s help. Sadly, though that was a bust. Not only is Fusco overrun at work like with this new detective who wanted his help. But all Fusco could find on Sandra is a sealed juvenile record.

Now normally he would have been able to unseal it yet that’s no longer possible. Just because he has the clearance doesn’t necessarily mean he can go traipsing about. Not since the feds started to look in on any other possible dirty cops. If Finch wants to learn more about Sandra then he’s going to have do it without Fusco. Anyways the jaded detective, still has a spot for newbies, and would rather help the rookie solve a murder.

Although Sandra’s number coming up might not have to do with who she is but more with what she is. She received a strange 911 call. It was from a little boy named Aaron and he claimed someone was trying to break down his door. Aaron was scared because he didn’t know where his mother was and so he called 911 expecting for help.

The kid didn’t know he was pawn though. He ended up doing exactly what his would be kidnappers wanted him to do. They needed him to call 911 because they wanted him to speak to Sandra. Once they got inside his house and found him they then put the kid back on the phone. The kidnapers made him tell her to answer her cell phone.

The kidnappers didn’t want their call to be supervised. The moment they knew it was safe to talk to her they then started making demands. If she doesn’t follow through; they are prepared to kill Aaron. The rules are don’t alert anyone to this call, follow all of the ringmaster’s demands, and she’s not allowed to disconnect the call.

The POI team is still confused. Finch was able to find out that Aaron’s call was purposely directed to Sandra. Reece and Shaw arrived at the boy’s apartment but it was too late. He had been moved and they had to go was footage from the home computer. Finch hacked the webcam to record the last images. From the short film, Reece realized they aren’t dealing any old kidnappers. These guys are military trained at least one of them has a connection to the Mexican cartel.

The kidnappers want Sandra to shut down the backup generator at the dispatch center. She was doing what they asked when she slipped up. Sandra tried to give the security officers a warning when the kidnappers called her out on it. He’s watching every move she makes and told her that unless she wants a repeat of what happened to Joseph then she better play along.

Joseph is part of Sandra’s past. The one that was supposed to be sealed but somehow these men got their hands on it.he main guy wants Sandra to erase all of the records in the backup generator. There are thousands of them and he wants her to get rid of t all. At first Sandra was hesitant. These calls are evidence in numerous cases but she can’t let Aaron die.

Shaw and Finch tried to trace the call and it led nowhere. The kidnapper is re-routing his call so that he’s never found. Shaw only found one of his pawns. While Finch finally figured out how the kidnapper knows all of Sandra’s movements. He must have put in a webcam in her headgear. Making sure he’s not seen, he came upon Sandra. He made sure to tell her to not to turn around. Finch revealed to her that he wanted to help.
He said that whoever is playing this game only wants one of the messages deleted. So he transferred them over to Fusco. Fusco didn’t want to help but he couldn’t say no when he heard a child was involved.

Funnily enough, Fusco is listening to the calls when one of them sticks out. It’s a call from a frightened woman and she just happened to have gone the same route as Fusco’s murder victim. His two cases are intertwined. After he told Finch about his victim, Finch wanted to go back in to speak with Sandra where he unfortunately made a very costly error. He slammed the door too hard and the kidnapper heard it through the phone.

Sandra tried to play it off by pretending she was still alone but they were onto her. So they showed her a lesson. The kidnappers set off a bomb and they’re threating to hurt Aaron if she doesn’t start deleting those messages.

The bomb naturally rattled her and she had to walk away. Finch found her cowering in a corner. He asked her what did they have on her. That’s when she mentions Joseph. He was a kid she used to babysit and one night she left him in is tub to go and fetch him his toy. He drowned and she was brought up on manslaughter charges. Sandra was never convicted but she’s always felt guilty. A little boy already died once because of her – she can’t let it happen again!

Sandra is going to give the team a couple of more minutes and then she’s deleting those calls.

Fusco made some progress with his murder case. The woman that died was having a volatile relationship with her powerful boss. She tried to end things and he killed her for it. But he knew she had made a 911 call and didn’t know if it would implicate him. That’s why he got someone to cover it up. They made a call to a specialist but had never expected the guy would kidnap a kid just to get calls.

Finch, for his part, is attempting to locate the kidnappers and the Aaron. They nearly found him when the ringleader found out his employers confessed to murder. He told Sandra she didn’t have to erase the calls anymore. Yet he doesn’t like loose ends. Bot Sandra and the boy will have to be killed now.

Reece and Shaw were able to stop him from hurting Aaron. They further learned that the culprit was never in the building from the start. He was simply using it to bounce around his calls again.

Only he’s also not the guy that arrived to kill Sandra. That was another lackey that Finch was able to deal with quite adeptly. Sandra and Aaron are safe now but what about Finch. He received a call from the perpetrator. The guy told him that this was the first time he’s ever been beaten and he can’t wait to work with Finch again.

Did Finch just make an enemy out of someone equally as smart as him?