BY Heather DiPietro on May 13, 2014 | Comments: Leave Comments
Related : Uncategorized 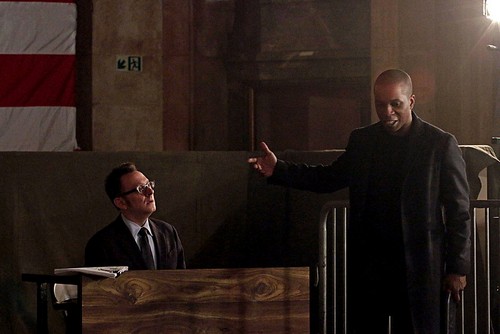 PERSON OF INTEREST returns to CBS tonight for another exciting episode. In “Deus ex Machina,” the third season ends with the team desperately trying to keep Samaritan from coming online and destroying them. Meanwhile, the battle with Vigilance reaches its climax.

On last week’s episode when an unknown entity prevented The Machine from seeing the full picture of an impending catastrophic event, it sent the team five separate numbers to help them piece together the bigger picture. Meanwhile, Root’s team of hackers arrived in New York.  Did you watch last episode?  If you missed it don’t worry we have you covered.  We have a full and detailed recap, right here for you.

On tonight’s finale episode the team takes desperate actions in its race to prevent the malevolent AI program Samaritan from coming online and making them its first targets. Meanwhile, the months-long battle with the anti-surveillance terrorist group Vigilance comes to a shocking conclusion, on the third season finale of PERSON OF INTEREST.

Season 3 Finale is going to be exciting, and you won’t want to miss it. So be sure to tune in for our live coverage of the new episode — tonight at 9 PM EST! While you wait for our recap, hit the comments and let us know how excited you are about the show. Don’t forget to come back at 9 PM for our recap!

Tonight’s season finale of Person of Interest picks up where we left off last week. New York City is in the midst of a total blackout, and Vigilance has kidnapped Greer, Finch, Senator Ross, and Control. They are holding them at an undisclosed location and creating a mock trial and broadcasting it live across the world. Peter, the leader of Vigilance calls Rivera up on the stand and questions him about Northern Lights. Rivera stands up and begins screaming at Peter when he realizes that Peter has gotten his hands on Federal documents leaking him to the Northern Lights Project, Peter shoots him and kills him.

Root has found Sumaritan. She calls Sameen and orders her to go to 24th and 5th St with John and George. Sameen can tell that Root is “about to go kamikaze” and she is concerned about her. Sameen sends John and George to the location in the dark, and commandeers a pedestrian’s bicycle so that she can go check on Root.

John and George arrive at the location, and NYPD officer Lionel meets them there. Lionel has no idea what trial they are talking about.

Root delivers seven more Sumaritan servers to a lab, she shoots the Doctor waiting for her to bring the servers. Then Sameen shows up and strangles another guard. They proceed to cut the computer chips out of the guards’ legs, they will need them to gain access to the building.

Peter calls Senator Ross up on trial, he is still demanding to know who is in charge of Northern Lights. After examining Ross, Peter realizes that Control was the person who orchestrated Northern Lights. He tells Ross to step down and orders Control up on the witness stand. Control informs him that as a sworn officer of the United States she will not answer any questions. The mock jury finds Control guilty, as they are about to sentence her to death Finch jumps up and tells them to stop – he confesses that he made the machine and he knows where it is.

George and John find some members of vigilante looting and pillaging NYC during the black out, they trick them into telling them where the court house is that Peter took Ross, Control, and Finch. Finch tells Peter he will tell him everything that he knows, as long as Peter lets everyone in the room go freely and unharmed.

Sameen and Root have made it into Sumaritan’s brain. Root informs her they are “inside a sleeping giant,” and instructs her not to wake it up.

George and John arrive outside the courtroom and find 6 dead members of Vigilante, someone else has beat them to them. George and John sneak into the court house. Vigilante knows their security has been breached and turns off all of the lights, a shoot out follows. It turns out Greer’s men have arrived to save him. They wound Peter and take him hostage, but Finch begs Greer not to kill him. Greer reveals to Peter that his team hijacked his live feed and the world didn’t see it, they just tweaked the servers to make Vigilance think that millions of people were watching them. Greer reveals to Peter that he owns him and he recruited him, Greer started Vigilance. Finch and Peter are shocked.

Meanwhile George has found a huge bomb in the basement. And, John is still caught up in a shoot-out between some members of Vigilance. Finch, Greer, and Peter are safely up on top of a nearby building roof and they watch the courthouse building explode. Hirsch is dead. Greer kills Peter. John arrives just in time to save Finch.

Greer turns the power back on, and Senator Ross guarantees him they will give him access to the government feeds. John is tending to Finch’s wounds. Root calls him and tells him they need to leave the library it isn’t safe. She tells them there is an envelope in the desk with their new identities in it.

Root wasn’t able to stop Sumaritan, but she was able to put a blind-spot in the servers and create seven new identities for her, Sameen, John, Finch, and their three tech nerds so that they will not be in danger, and they all must go their separate ways and begin new lives.