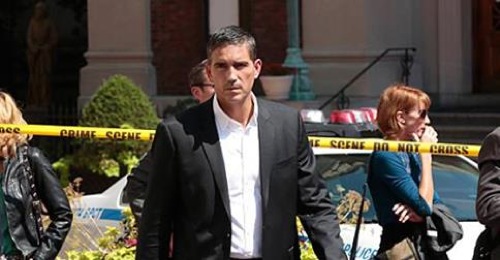 On the last episode Reese’s cover job as a detective at the NYPD becomes complicated when the young brother and sister he’s protecting become targets of a gang investigation. Did you watch the last episode? If you missed it, we have a full and detailed recap right here for you.

On tonight’s episode Finch is suspicious when a gifted political pollster’s number comes up at the same time that his typically ironclad predictions go wrong, and believes that the two events are linked. Meanwhile, Reese is sidelined by a direct order from Captain Moreno.

On tonight’s episode of Person of Interest, Shaw had to get drawn in on the upcoming election in order to be close to the team’s newest POI. Simon Lee is known as the Golden Boy of winning elections yet his latest client, Governor Murray, had suffered a massive setback during the final hours on voting day. That setback (that for once Simon surprisingly didn’t see coming) cost Governor Murray and his team the re-election bid.

And it just can’t be a coincidence that the man primarily known for never losing manages to lose his first election on the day his number came up?

After Murray lost, his campaign manager had gone on the attack. He blamed Simon for the Governor’s defeat and while he was the only one throwing punches – he might not be alone with his assessment. Many others, who have worked tirelessly to get their governor reelected, might also want a word with him. Probably later on in a secluded area!

Simon couldn’t understand why he lost though. The numbers simply weren’t making sense to him. So he informed Murray that he thought the election might have been rigged somehow. Yet Murray told him that maybe it would best if Simon just left the office for now. At least until tempers start to cool down.

Seeing that no one was going to believe him, Simon then decided to try his luck with the voting commissioner. Hence he was trying to make his case to the commissioner when suddenly a former employer decided to go on a shooting spree.

If Shaw and Root hadn’t been there then the official story would say that Simon got in the way of an office dispute. But Root knew the Machine sent her there for a reason so she knew the shooting was going to be about more than a dispute. It was going to be a cover up.

The election was rigged and Samaritan was behind it!

Back when Finch had first created the Machine, he had attempted to teach it how to care about people. That was the only way at the time he could figure out how to control it. Because if he couldn’t control it then it was going to start thinking about everything like it was part of the objective. Either useful or in the way!

Governor Perez didn’t even know she was going to win. The Samaritan had merely used her until she was no longer convenient to whatever plans it has.

And when Finch looked at the situation as coldly as something that was created without any human emotion – he saw the Samaritan was actually going to use the LT. Governor as part of its plan. Everything else about this election might very well have been a means to an end.

That’s how the machines work. They only know how to use people so Finch warned Root about her attachment to the Machine. He told her she shouldn’t put as much faith in the Machine as she does. Root seems to think she’s loved and Finch told her that once she no longer can help –the machine was just going to find someone else.

So he told her not to follow the Machine’s plan. It was going to send in Root to save Simon from a second assassination attempt and he didn’t want her to die like that. But she ignored him. And in doing so she saved Simon from Samaritan. That time.

Finch was the one that got Simon to drop his case all together. They erased his files and made it all look like he was being paranoid. Thereby allowing the Samaritan to no longer view him as a threat.

And after what Root had been through; she walked away with what she considers to be a scratch. You see Root realized something during all of this in-fighting between the A.I.s. What makes the Machine different from the Samaritan is Finch.

As for Reese, he had to go to therapy after he discharged his weapon one too many times on the job. And, shockingly, therapy seems to be working for him!