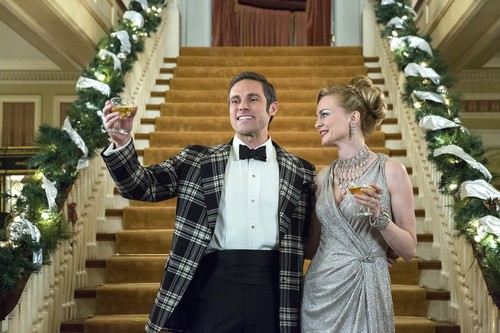 Petals on the Wind will be premiering tonight, is is the sequel to “Flowers in the Attic”. On tonight’s episode, ten years after the Dollanganger siblings escaped from their grandmother’s attic, where they were held for two years, are forced to face forbidden feelings they developed for each other and seek revenge against their abusive mother.

A decade after Cathy (Rose McIver, “Masters of Sex”, “Once Upon a Time”), Christopher (Wyatt Nash, “Pretty Little Liars”) and Carrie (“Bailey Buntain”, “Bunheads”) escaped from their grandparents’ attic at Foxworth Hall, “Petals on the Wind” continues to follow the twisted plight of the family as they attempt to put their sordid past behind them, but soon discover certain secrets can’t be left behind.

On tonight’s episode when Cathy finds herself in an abusive relationship with a fellow dancer, Julian (Will Kemp, “90210”), Christopher and Cathy are forced to face the forbidden feelings they developed for one another while coming of age during captivity. But when tragedy strikes the Dollangangers once again, Cathy returns to Foxworth Hall to confront her grandmother and seek revenge on her mother with a plan to seduce her husband Bart (Dylan Bruce, “Orphan Black”). When Christopher runs to Cathy’s side, the two are determined to start over again – together.

Tonight’s episode of Petals on the Wind is going to be exciting; you don’t want to miss this show at all. We’ll be blogging it right here for you, in the meantime hit up the comments section and let us know how excited you are for this second look into the Dollanganger siblings’ lives.

The remaining Dollanganger siblings have managed to both survive and thrive since escaping their mother’s clutches. After they had made that run for it in the middle of the night, they were lucky enough to have been taken in by a kind doctor. He brought them up and even assumed the role of a father by loving them. Something they obviously needed after years of physical and emotional abuse at the hands of both their mother and their “grandmother”. But now all of that has changed. Their adoptive father unfortunately passed away and the kids are once again in the position of having to fend for themselves…

Christopher has grown up to follow his passions. He’s a doctor in training and his mentor feels like he has real promise. As for his other passions – namely his sister – he tried to put what happened between them firmly in the past. Yet he couldn’t resist getting jealous when he saw his beloved Cathy on a date.

They gave in when they shouldn’t have and by morning – Cathy realized her mistake. She knew it would work out better for everyone if she put some distance between herself and her brother. So she chose to essentially run away with a guy she just met. And she was forced to pay for that action many times over.

Cathy’s leaving granted her the opportunity to pursue her dream of dancing onstage. This gives her a chance to follow her childhood dream of being a ballerina, but it also puts her at risk of her new boyfriend. He was all she had or knew. So she had to depend on him and despite being very talented (that part she knew) Julian wasn’t dependable. The volatile temperament is something she only later on discovered.

Cathy left Christopher and Carrie behind in order to give her brother the chance to move on. She wanted him to have a normal relationship with someone. Someone who could also one day hopefully give him children. Christopher would then have a second chance at a family that was denied to him and his siblings. Hence he started to date someone.

The young lady in question was sweet and even kind. When she learned that Christopher would have to see Carrie though her cotillion alone – she offered to help. Though she soon found out that not everyone was willing to accept her as a replacement for Cathy.

Carrie ran away from school to go be with her sister in the city. The bullies at school had gotten so bad with their taunts that when they decided to escalate things by locking her inside of a closet – that looked all too familiar to a certain attic – she was for all intents and purposes pushed into leaving. And she too came to regret her decision.

Julian was abusive towards Cathy. He hit her. And by way of apology he would then sabotage the other dancers in their company. That way Cathy got the lead and was supposedly made happy with her recent change of fortunes. However Julian was his own worst enemy. This time instead of using his fists to destroy his relationship, he tried using Carrie.

Julian thought it was safe to touch his girlfriend’s sister while she’d be too busy dancing onstage. However Christopher ruined that plan when he arrived backstage to surprise his sister. He immediately separated Julian and Carrie. And just in case punching the other man wasn’t clear; Christopher warned Julian to never come near his sister again.

Something fate took care of when Julian later died that very same night. Cathy had only just told him that she was pregnant when the car hit them. Cathy and her baby survived while Julian perished at the site.

Everyone felt bad for Cathy. They sympathized with her now having to raise her son on her own. But they don’t know the full truth. They didn’t know that Cathy had finally had it with Julian. Nor does anyone know that his inappropriate contact with her sister was what pushed her to ending their relationship. Only a small exclusive number knows what happened and they’re not going to tell anyone. Even if it would be better if they did.

Carrie never acknowledged her fling or whatever it was with Julian. The years passed and still no one talked about it. And then Carrie met someone. She met a pastor and he was very much in love with her. Although after everything she’s been through with her family and with Julian – she didn’t feel like she deserved for anyone to love her.

So she tried to look for validation in her mother. Carrie contacted Corinne, and not for the first time, looking for answers.

Corinne rejected her daughter. She pretended like she never had children and flatly refused to take the wedding invitation that Carrie so desperately wanted to give to her. Afterwards, Carrie couldn’t handle it. And so she killed herself. She died the same way her twin did and by the same method – rat poison used as confection sugar on donuts. As if it was her way of saying that she should never have made it out of that attic to begin with.

Christopher simply wanted to mourn Carrie. Cathy was the one that wanted something more. She figured out what pushed Carrie into committing suicide when she found Carrie’s letters to their mother. And that’s when she crafted a plan.

For far too long their mother has been allowed to live a life unimpeded by her children. Cathy wants to change that. She wants to rip away the one good thing that Corinne has – she wants to take away her mother’s husband. So she seduces him.

Cathy seduced Bart and she wants to use her pregnancy to lure him away. But more than that – she wants to reveal the truth about their mother. Subsequently she had carelessly destroyed any chance of Christopher having a life with his girlfriend so he was even available to help her unveil her mother’s true nature.

They crashed the famous Foxworth Christmas Party. And there in front of all of their mother’s friends – they told the world how they were kept in the attic for two years prior to their mother realizing that killing them would be easier. Their grandmother even corroborated their story like the vicious hag she loves to be.

Sadly, Corinne couldn’t take being forced to face the truth. Her mother had driven home the true cruelty of her crimes by showing her Cory’s, her late son, remains. Corrine snapped. She started imagining that her son was her former husband and uncle. So it made matters worse when she felt like he too was pushing her away.

Corinne set the family Manor on fire. She started it by lighting the drapes in her mother’s room. Christopher carried his mother out of there, but Bart went running to the flames in a vain attempt to try and save his mother-in-law. Neither of them was able to survive.

Later Corinne was sent to a mental institution. As for Cathy and Christopher – they moved out west and became the Dollangangers again. They’re presently living out their lives as a happy family with the siblings pretending to be man and wife while their children (Cathy’s children) have no clue about any of their past.