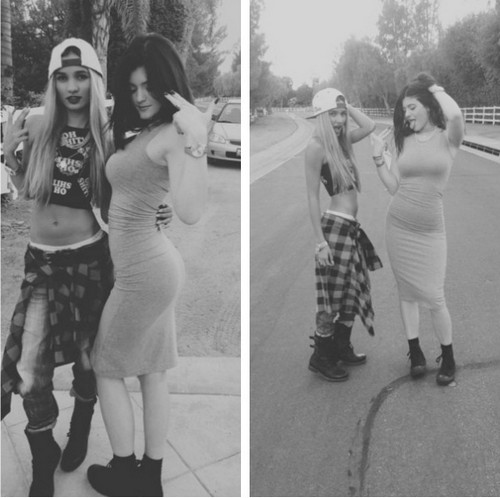 The Kartrashians seem to always have a hidden agenda and a continuous flow of money-making schemes up their sleeves. Has the Kardashian family rubbed off on Kanye West too? It would seem so if you take a careful look back at the history of Kanye Worst’s new protégé, Pia Mia.

Viewers got a first look at singer Pia Mia at Kyle Jenner’s birthday party in August 2013. It just so happened (yes, that is sarcasm) that Drake and Kanye were seated at the table and Kim was ready to film the spontaneous (yes, more sarcasm) cover of Drake’s “Going Home” by Pia Mia who was more than happy to oblige when asked to sing for everyone at the dinner table. Remember…everything is calculated with these people. Kim, moments later, tweets a Keek video of this “surprise” show. Kanye shares his pleasure by saying what a great job she did, egging on Drake to comment as well.

Well, seems this “surprise” rendition of Drake’s song wasn’t so much of a surprise. Are YOU surprised? You shouldn’t be if you have ever kept up with the Kardashians, because every move they make and every “spontaneous” thing they do is actually well planned out far in advance. Seems Kanye may have taken a liking to Pia before this little dinner party. Kylie posted pics of Pia and herself with three words under it: Yeezy taught us.

Pia Mia is looking just enough “bad girl” and seems just like Yeezy’s type. And, unlike his fiancé, Pia Mia actually has a talent. From the combat boots, to the cropped top, to the long blond locks, to the shirt tied around her waist, to the very tiny waist, and, of course, her exotic look, she is Kanye’s dream girl. Even better for Kanye, she has had a taste of celebrity now and desperately wants to make it. She looks up to Kanye and idolizes him. We all know Kanye loves being adored. At the party, Kanye even commented on Pia Mia’s style to Drake. Whether Kim wants to admit or not, she was seething.

We all know that Kim is so not into Kanye, but she IS into herself and would never ever want to be made a fool of (I mean more than the fool she makes of herself) in such a public way if Kanye were to cheat. Kanye seems to be taking lessons from Kris. He scored his fiancé the Vogue cover, and he found a way to get his girl on tv at Kylie’s televised dinner while pretending nothing had been pre-planned, and then pushed Kim to film and tweet it to her followers. Nice work, Kanye. You must have taken that right out of Kim’s playbook. Kanye has likely known Pia Mia for a while.

Her manager, Neima Khaila—who also owns clothing line Pink Dolphin—introduced Pia to Abou “Bu” Thiam, who PRNewswire reports is known for his A&R work with Rihanna, Kanye, and Jay Z. Sounds like everything is falling into place now and we can see that the introduction of Pia Mia to the big time was carefully calculated by none other than Kanye. Interestingly, Kanye is not managing her, nor did he sign her to any deal, nor is he said to be collaborating on any songs with her. So…what is his strong interest in her since he really has nothing to gain by helping her? Take a look at her website and all her pictures and it will become quite obvious what Kanye’s got in mind. For Kim, it is not about worrying about losing Kanye, it is about not wanting to look bad by being dumped by Kanye for another woman.

If you take a look at Pia’s style evolution since she got her start on KARtv, a kids’ performance show, to now, you can see the dramatic change. Now she seems to be JUST what Yeezy was looking for. And with Pia’s mutual attraction to him, and the way she looks up to him, don’t be too surprised if the hook-up rumors become a reality!