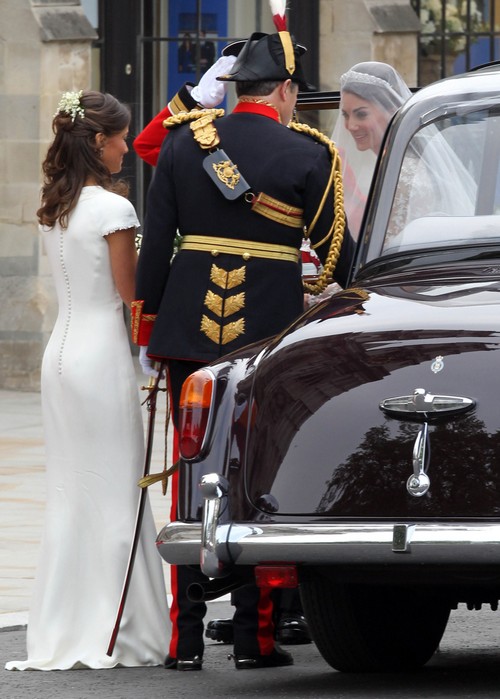 Pippa Middleton ended up upstaging Kate’s wedding to Prince William, and it was mostly because of her ass. The royal wedding watchers [and really, most of the world] was fixated with the press coverage on Pippa’s body, and honestly, I’m still not really sure why. Is it breaking news that the sister of the future Duchess of Cambridge has a great body? Apparently, it was – and it was such a fixation for the media that it actually ended up detracting the focus away from Prince William and Kate Middleton.

Well, cut to more than a year later, and Pippa is just a footnote in the royal obsession – with the public now moving on to Prince George. But now that Pippa’s ass antics at the royal wedding have passed, an esteemed French royal expert is piping up and claiming that Pippa was wearing a false bottom at the royal wedding.

According to the Daily Mirror, Stephane Bern [a respected French royal watcher] used his TV show to ‘reveal’ that Pippa was wearing a fake ass during her sister’s highly televised and publicized wedding. He stated [very confidently, might I add], “But of course she had a false bottom. I repeat it, she had a false bottom. You take her away from that and she has normal buttocks. It was an optical illusion. She knew there were a billion people watching. It was the moment to show it.”

Hmmm… how could this man possibly know this? Also, Pippa’s ass was honestly not THAT impressive at the wedding. The camera lingered on it, and it caused a lot of discussion, but she was also photographed in a bikini and it looked much the same. I could understanding if she was sporting a Kardashian-level butt increase, but really, the gown she was wearing was very fitted and the press just happened to be obsessed with her at the time.

What do you guys think? Did Pippa pad her butt during the wedding? Let us know your thoughts in the comments below.