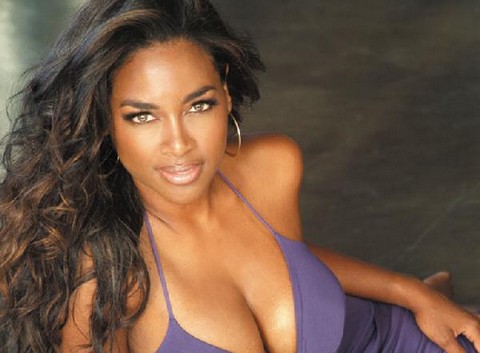 The Real Housewives of Atlanta got together yesterday to film their highly anticipated reunion show and word on the curb is that Kenya Moore suffered a severe beat down at the hands of one of her housewife friends. Surprisingly, we hear it wasn’t Phaedra Parks that laid them paws on Kenya; we hear it was actually Porsha Williams (Stewart) that threw them things at Kenya. News spread like a wildfire yesterday of the melee that went down on the RHOA set and since then, there have been a lot of rumors going around about how everything went down. Though there are conflicting reports filtering out of various media outlets and difficulties in pinpointing exactly what happened, there is one thing we know; Porsha definitely man handled Kenya on set.

It is not like anyone should be completely blindsided by the news of Kenya being physically attacked. Miss America USA touts herself as “the wild card” of RHOA and she definitely has lived up to that title. From smack talking, friend snatching and the stealing of business ideas and husbands, Kenya “Moore Whore” (as Phaedra calls her) has kept busy stirring the drama pot this season. Kenya’s antagonistic relationship with Phaedra has been in the spotlight for some time now, that drama all started last season with the booty workout DVD blow out. Well with the Phaedra beef cooking, it was easy to neglect the beef cooking between Kenya and Porsha; this too started last season.

You may recall, Porsha invited Kenya to a charity event in honor of her grandfather, the late civil rights leader Hosea Williams. When Porsha introduced Kenya as Miss America instead of the correct Miss USA, Kenya flipped out on Porsha and stormed out of the event. The tension continued on to the Housewives trip to Anguilla where Porsha and Kenya almost came to blows after hurling profanity and insults at each other. You may also recall some of Kenya’s other antics from the Anguilla trip such as flirting with Phaedra’s husband Apollo Nida at the pool and backing that thing up on Cynthia Bailey’s husband Peter Thomas with risqué dance moves. Kenya got on everyone’s nerves during that Anguilla trip.

To most of the cast back then, it seemed that Kenya was jealous of the other girls having seemingly solid relationships. Although Kandi Buruss isn’t married now and wasn’t then, she was dating her now fiancé Todd Tucker and had brought him along for that trip to Anguilla. Porsha was living what appeared to be a perfect fairytale marriage to Kordell Stewart at the time and all the other ladies were married. Kenya was there with her then boyfriend Walter. In case you forgot or didn’t know, Walter clowned Kenya in front of the whole group during that trip when he basically told her he didn’t want to marry her and had no plans of marrying her in the future at the time.

Fast forward to this season, we found Kenya and Porsha as the only two single and alone girls. (Unless you took Kenya’s “African prince” story literally and believed him to be real or Kenya to be in a real relationship) It kinda seems like Kenya took every opportunity throughout this season to downplay Porsha’s marriage. If she wasn’t making snide comments about Porsha not being able to keep her man or her perfect life, she was talking about how stupid Porsha was and poking fun at the rumor that Porsha had married Kordell to be his beard. (A beard is basically a woman who couples with a man to hide the fact that he is gay) Then on the trip Kenya planned for the group to Mexico, she really went in on Porsha.

Remember the dinner scene where Porsha ended up discussing the end of her marriage to Kordell with the group? It was primarily Peter and Kenya (who were sitting together because Kenya wanted to mix things up and have the couples sit by other folks in the group) that were quizzing her about what happened. Porsha made a few statements about Kordell being a “tainted” celebrity and how she wanted to help fix things for them as a couple. (to be honest, her comments did imply that she was Kordell’s beard) Well Kenya jumped on Porsha pretty tough and even ignored when Kandi she came to Porsha’s defense. When the trip wrapped up in Mexico with Kenya re-creating the pillow talk night, Porsha came to Phaedra’s aid after Kenya confronted Phaedra about having a friendship with Apollo. Porsha told Kenya since she has never been married, she shouldn’t comment or interfere with other folk’s marriages. Kenya shut Porsha down by telling her she was never married either because she was a beard. It is definitely a little complicated and messy. Know that it was a tacky and uncomfortable scene for sure.

By all accounts, Porsha let Kenya have it. The word on the curb is that Porsha boxed Kenya up with her fists a bit before grabbing her by the hair and literally dragging her across the floor. Security had a hard time breaking the ladies up, Andy Cohen and the other housewives almost had a heart attack and the police had to be called to the set. Although no arrests were made, we hear that Bravo is currently trying to persuade Kenya not to press charges against Porsha. Whatever specifically went down, it is clear that it went all the way down and that the reunion show is going to make for pretty intense viewing.

Maybe Porsha followed Kandi’s advice to “drag [her] up in this b*tch” or Phaedra masterminded the whole Kenya beat down to seek revenge. We don’t know and we don’t care. CDL does not condone violence but we know when to call a spade a spade. Kenya did not deserve to be beat up, no one does. Kenya DID ask for this though. In fact, she has been begging and pleading for this since she joined the cast if you ask me. She sowed a negative seed and reaped a negative harvest, simple as that. It will be interesting to see how this all plays out on the reunion show and what will happen to the cast for next season as a result. Will you be tuning in to see the RHOA drama? What do you think about Porsha beating Kenya up? Help us wash out this load of celebrity dirty laundry with your thoughts! Share them with us in the comments section below.