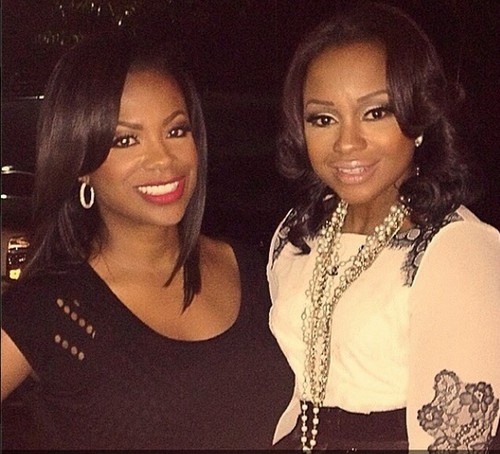 Life has become hell for Real Housewives of Atlanta’s resident southern belle Miss Phaedra Parks. Everyone knows she is dealing with a lot of stress because of her marriage to convicted felon Apollo Nida. From dirty dog cheating allegations to pending legal charges of fraud, Phaedra truly has her hands full as she is a successful lawyer, entrepreneur, mortician and mother as well. As her husband’s present legal troubles threaten to tarnish her professional image and while the world waits to see when she will be indicted, Phaedra has remained tight lipped in the media and has chosen not to publicly address her recent troubles to date. They say a picture is worth a thousand words and a recent snap of Phaedra tells us all a whole lot about how she is coping.

Phaedra went out to support her fellow RHOA cast mate Kandi Buruss who was filming a special called “Being Kandi” to air on Centric Television and both ladies tweeted out a photo of them together on set following the event. Kandi looks positively radiant on the photo, Phaedra looks thin and stressed. True, she has just signed on to be a brand ambassador for the diet pill Xenadrine and has reportedly been using the supplement to bounce back into shape after giving birth to baby number two Mr. President. However, this weight loss does not look good.

Phaedra appears gaunt in the photo, almost as if her body is going to cave in on itself at any moment. It is apparent in her face and posture, she is at wits end. Even her Twitter profile reveals her fight to stay strong and not let this fiasco break her all the way down. Phaedra has been inviting her followers to come worship with her at churches all over the south, and has even been tweeting inspirational Bible passages. The most recent passage she tweeted was very telling, “The LORD will perfect that which concerns me…Psalm 138:8” followed by the hash tag #Wednesdayword.

It looks and sounds as if Phaedra is determined to get through this ordeal with her dignity in tact, i.e., without any public support or acknowledgement. The LORD knows she has a lot to deal with too. In case you missed last weeks episode of RHOA, which was shot AFTER the search warrant was issued and executed on Apollo’s car in September 2013, Apollo is not behaving like a remorseful and loving husband. In fact, Apollo is behaving quite the opposite in most everyone’s opinion.

You’d think that after being alerted of his legal troubles when the Feds searched his vehicle that Apollo would be staying close to his wife and staying away from any more trouble. Moreover, you’d think that a sexy getaway to Mexico would be a prime opportunity to show his wife how much he loves and appreciates her. Uh, no. Ol’ boy walked right into trouble and chose to sit and have a private one on one moment with Kenya Moore “Whore” as his wife calls her. He spent time with a woman who has already caused a lot of stress and tension in their marriage, instead of his wife. Then after we see Phaedra interrupt them to ask Kenya and Apollo “what’s going on”, we saw a preview for next weeks episode. Next week we get to watch as Apollo leaves his wife at their hotel room without a room key to get in so that he can go back to the bar where Kenya is.

Look, I know this is a reality show and that some of this stuff is hyped up and scripted to look bad, but c’mon son. Apollo is a dang fool and he is starting to make Phaedra look like one too, now more than ever. Phaedra’s RHOA introduction finds her saying, “A true southern belle knows her own worth, and I am priceless.” So Phaedra, what are you worth? Priceless, you are not. It seems you think quite low of your own self- worth getting and staying married to Apollo and now everyone thinks you are worth nothing more than a common criminal. Marriage is about two people becoming one. What have you become?

Meanwhile, Apollo has been granted yet another extension on his court date from March 25th up to April 25th as it looks like he is coming close to securing a plea deal with the Feds. Phaedra girl, if you can manage to hold on and come out of all of this without an indictment or criminal charge against you as an individual, then you should go on and divorce Apollo. Separate yourself from this man.

Everyone knows you guys have children and that you have to consider them, so do what you can to support Apollo as their father from afar. Stop sleeping with the enemy, it doesn’t seem worth it. If you were involved in this criminal activity (as we are pretty sure you were), walking away without any legal repercussions should be seen as a gift from above. Do not take it for granted. This load has been filthy and full of hard to wash out stains, as always, we need your help washing it out. Let us know what you think about this recent turn of events with Apollo’s legal troubles and how Phaedra is looking these days. Share your thoughts in the comment section below.