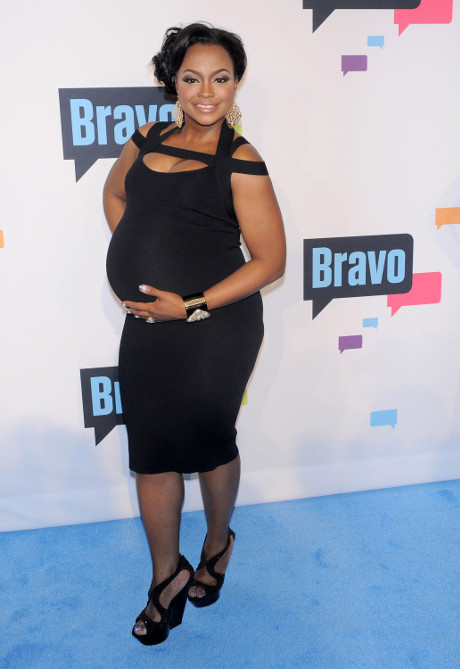 Well, it is beginning to look like Real Housewives of Atlanta star Phaedra Parks is more than just a southern belle; she is also a real gangster. Like certified. The licensed Georgia state attorney is currently embroiled in Apollo Nida’s legal woes on charges of fraud and it looks like she will have her own legal woes to deal with on top of that real soon. The whispers have grown to shouts: Phaedra is not merely an innocent bystander but actually the criminal mastermind and planner.

Ever since Phaedra’s husband was arrested and charged with fraud, folks have been wondering what involvement Phaedra had, if any, in his alleged illegal activities. CDL already reported on the connection Phaedra had to Apollo’s shady business dealings and the evidence uncovered clearly pointed to Phaedra being privy to and involved in some of his “business transactions.”

Documents found through the Georgia Secretary of State showed that Phaedra was a business partner with Apollo on several business ventures. Common sense told us that a smart attorney like Phaedra couldn’t sleep with her husband every night and not know or suspect he was involved in illegal activity. Heck, everyone raised an eyebrow the night of Apollo’s infamous “pillow talk” fight night, when he bragged about spending five to eight thousand dollars on strippers; did you really think his behavior wouldn’t raise Phaedra’s eyebrows?

Well, perhaps Apollo’s behavior did not raise Phaedra’s eyebrows because she already knew what was going on. How did she know you ask? Phaedra planned it. At least this is according to Angela Stanton, someone CDL already mentioned to you a while back when the pillow talk fiasco occurred. Angela Stanton is an old friend and “business” associate of Phaedra’s who is currently being sued by the southern belle for defamation. After doing some time for fraudulent business activity, Angela Stanton left jail and wrote a book called Lies of a Real Housewife: Tell the Truth and Shame the Devil. The bombshell book finds Stanton making some shocking allegations accusing Phaedra of arranging schemes to make money with fake credit cards, bad checks, and stolen automobiles.

Phaedra immediately sued Stanton for defamation, charging that the book was libelous as soon as it was published. Phaedra came hard, too, asking for thirty million dollars from Stanton. The proceeding had already started moving along when Apollo was served with his warrant and subsequently arrested. Stanton went on the record with a statement immediately upon learning of Apollo’s January arrest:

In 2012, I released my personal memoir, Lies of a Real Housewife: Tell the Truth and Shame the Devil. In the book, I detailed the struggles I faced as a young woman drawn to the temptations of crime and the false glamour it affords. I alone am responsible for the mistakes I made as a young woman. Yet, I have felt a certain sense of anger toward the people who used me during that period of my life. Certain individuals found me at a time when I was vulnerable and searching for friendship, and used those traits to lure me into doing their bidding.

I read with sadness the news that Phaedra Parks’ husband, Apollo Nida, was arrested for alleged schemes that are remarkably similar to those that lured me years ago. I was troubled to learn that the alleged crimes involved the use of a vulnerable woman to carry out the schemes. The story is all too familiar to me. I sincerely hope that Ms. Parks has not been part of his alleged crimes. I hope that she, like I, learned from her mistakes.

Although tragic, the news of Apollo’s arrest has been vindicating for me. Since I published my book, Phaedra Parks has used her wealth and influence in an attempt to silence me. She filed lawsuits against my publisher, and threatened them with years of expensive litigation if they did not cease publication of my book. As a result, I lost nearly all the royalties I was owed. Ms. Parks used her influence in the media to discredit my story and smear my name, casting me as a delusional liar on the pages of popular blogs. After going to prison and losing everything, my story was all I had left, and she took that from me.

About a week after Stanton made this public statement, she was summoned by Phaedra’s attorneys to sit for a deposition. This is where the “you know what” started to hit the fan. You see, after Stanton sat for her deposition, she made numerous requests for Phaedra to sit down for her deposition through her attorneys. Phaedra’s attorneys only gave Stanton the run around. This is confusing, as Phaedra is the plaintiff and required to prove she deserves the thirty million dollars she was demanding. Phaedra’s deposition was key to her proving that the book is libelous and qualifies for defamation. Phaedra’s actions were quite contradictory and confusing. So much so that Stanton filed for summary judgment on February 24, 2014. The legal maneuver garnered so much attention that Stanton’s attorney actually posted the entire motion on his website along with the following statement:

I have received numerous inquiries about this motion today. Rather than comment on it, I am publishing it here. I’d prefer to let the pleading speak for itself. In sum, we are seeking summary judgment in favor of Angela Stanton, against Phaedra Parks, on defamation claims asserted by Ms. Parks. All the evidence that has been developed in this case points to the truth of Ms. Stanton’s book, Lies of Real Housewife, and Ms. Parks has failed to put on any evidence to support her claims. Ms. Parks has not sat for her own deposition. We are also seeking sanctions in the form of attorneys fees due to what we believe to be frivolous litigation.

Now that this motion has been filed, Stanton has revealed more disturbing facts. Apparently Stanton has been receiving death threats ever since Phaedra filed the suit for defamation against her. Although some of the death threats have been sent anonymously, Stanton revealed that a lot of them came from Everett Tripodis, who called her home personally. Don’t know who Everett Tripodis is? Well, he is none other than Apollo’s co-conspirator in his alleged fraud case. The threats really shook Stanton, too, because she has no idea how Phaedra even found out where she lived!

Chile. This ‘ish is getting real crazy. Understand that Stanton is not alone in making these claims against Phaedra; she has numerous sworn statements of other individuals to corroborate her story. The story includes Phaedra planning criminal enterprises for her husband and other associates to carry out; this story also includes Phaedra having her goons send out death threats to a single mother of four. It makes you wonder if Phaedra planned on also embalming the body of the old friend she is literally and figuratively trying to bury.

Ladies and gentleman, it appears that Phaedra’s life of organized crime is coming to light and crumbling right before our very eyes. Some of this was suspected once we learned that Apollo got into some trouble, but it is still shocking nevertheless. This load is downright dirty south filthy. Help us wash out this laundry. Leave your thoughts in the comment section below.