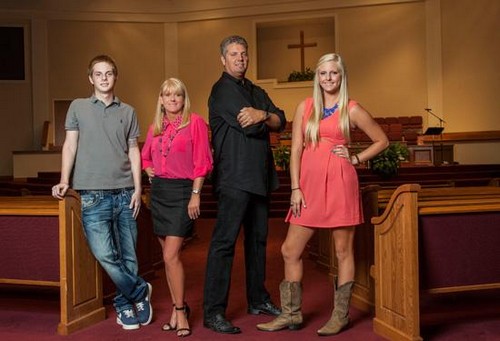 Tonight on Lifetime PREACHER’S DAUGHTER returns with its second season called, “Raising Hell.”  Season 2 begins Tori getting evicted from her apartment, and Taylor filming a music video. Meanwhile, Kolby decides she doesn’t want to follow in her parent’s footsteps; and Megan sneaks out to a lake party after learning her dad is going to be a full-time minister.

The gap between heaven and hell has never been wider than in the season two of “Preachers’ Daughters.” Lifetime’s youngest skewing show, with a median age of 32, the series is produced by Thinkfactory Media and follows the lives of four preacher families after the church doors have been shut. With judging eyes watching, the drama runs deep as the girls struggle with living up to the expectations of their parents and their congregations. As temptation, redemption, guilt and the path to right and wrong collide, will these preachers’ daughters choose sin or salvation?

On tonight’s episode things are getting spicy for the Preachers’ daughters. Tori gets evicted from her apartment while Taylor films a music video. Kolby doesn’t want to follow in her preacher parent’s footsteps and Megan sneaks out to a lake party after learning her father is going to be a full time minister.

Tonight’s episode is going to be another drama packed one, which you won’t want to miss. So be sure to tune in for our live coverage of Lifetime’s Preachers’ Daughter Season 2 premiere– tonight at 9PM EST!  While you wait for our recap, hit the comments and let us know how excited you are about the new season of the Preachers’ World tonight.

The Elliott family attends Sunday service and Tori, still wearing clothes from the night before, is hungover and can barely keep her head up. Her family knows she is out of control right now and Tori’s dad says that he is trying to be firm. Tori rushes out to go throw up.

Ken arrives at church with Taylor in tow. Taylor loves twerking and partying and feels like she is finally ready to make her own decisions and do what she wants to do. She feels she is old enough to decide how much time she dedicates to the church and asks her dad why she has to be there all the time with him. When she tells her dad that she’ll be out of the house soon and he’ll have to find someone else to get the seats in order, he tells her that while she is under his roof, she’ll follow his rules. She counters that she is 18 and shouldn’t have to be there just because he is the preacher. She tells him HE is the preacher so he has to be there, just because she is a preacher’s daughter, doesn’t mean she has to dedicate the time he does. He tells her she hasn’t earned the adult status she wants so badly. Ken feels image is everything. She is not ready yet to be an adult and on her own. Taylor is ready to break free and begin her music career so that she can get out of her dad’s house.

Meanwhile, at the Cassidy home, Jeff is working on some music when Megan, 17, comes in the room in a revealing skirt that dad does NOT approve of. She just came back from a shopping trip and Jeff demands to see all of her purchases….after she adjusts the skirt she has on so it is not so high. Jeff believes that as a leader in the church, people are looking at his child and he wants to project a more wholesome image. The two outfits she tries on next are pretty trashy and Jeff objects, calling her hot pink shoes “hooker shoes.” Megan believes it is hard to live a Christian lifestyle when there is so much opportunity to sin around her. Megan asks if she can find out what her mom thinks of the clothes, but Jeff objects telling her that she must take everything she just purchased right back!

In Tennessee, Kolby, 16, is a guest cohost on her mom’s radio show. Both of her parents are involved in the ministry. Kolby is extremely embarrassed in scenes from her mother talking to young church members about the different forms of premarital sex that are considered to be a sin. As she gets into a little too much detail, Kolby hides her face as her friends seated next to her giggle. Kolby is not afraid to speak her mind to her parents. Nikita and Victoria are divorced. On the talk show, Nikita joins Victoria and Kolby to discuss family issues. Victoria has very different, and slightly more liberal, views on how to raise their daughter. Nikita had Kolby write many essays after reading different books of the bible in order to earn $2,000.00 to buy a car. He also believe that for him to pay for college for Kolby, she must earn it by taking a year off after high school and dedicating that time to the ministry. Nikita shares during radio interview that both he and Victoria are receiving offers for Kolby that are ministry-based. He wants her to pursue a career in the ministry.

Megan is smoking and hanging out by the pool with friends Carly and Samantha. The girls are making their plans for a party they’ll be going to. Megan confirms her parents would “freak out” if they found out she was at the party she is going to, but says that “what they don’t know won’t hurt them.”

Back to Tori, 21, she is sitting out by the parking lot, feeling very sick. Her younger 16-year-old sister feels bad for her…she is disappointed in her. Cut to a scene from Tori’s partying from the night before and we see her taking multiple shots while out with friends, and even riding a mechanical bull in her tiny skirt hiked all the way up! Her and her friends hang out on a balcony and start throwing beaded necklaces. When she is encouraged to lift her top, common for Mardi Gras, she instead decides to turn around, bend over, and pull up her skirt. Even her friends are shocked with that! She stumbles back into the club to use the restroom and when she comes out, her friends are nowhere to be found. The problem is that they have her purse and all her money. She has only her phone which is useless because her attempts to call her friends are useless since none of them are answering their phones. Tori ends up calling her younger sister to come and pick her up to take her back home. She no longer lives with her parents because as she says, she likes to be able to play loud music and dance around naked. Her preacher father pulls up in a jaguar to pick her up. Her parents came after catching her sister trying to sneak out to pick her up.

Jeff and Darlene, Megan’s parents, take a motorcycle ride and stop off for a little break by a lake and talk about how they’ll handle the Megan issue. Jeff discusses his calling to be in the ministry full time which will mean cutting back on expenses and selling their home. They plan to tell Megan their plan when they get back.

Meanwhile, Megan is shopping and Taylor is working on making her very risqué music video. Kolby talks to her dad about college. She wants him to pay for her to attend college without the requirement of spending a year dedicated to the ministry. That is the condition her dad put on paying for college. When Tori finally arrives back home after her wild night and Sunday morning service, her roommate shares an eviction notice with her. They need to find a new home.

Jeff and Darlene get back home and call Megan into the room to tell her that Jeff lost his job, and he is taking this opportunity to move into the ministry full time. Jeff explains that once he moves full time into the ministry, people will look even more closely at Megan and the family, so they all need to be low key and conservative.

Taylor is at home and her parents are hosting a small gathering with their congregation. He friend drops off her music video. She decides to put it on in front of all the guests. Her mom and dad are very upset with her, and even some of the church members throw in a few comments to try to talk some sense into her. After everyone leaves, her parents talk to her very calmly and her mom makes a lot of sense, but Taylor is tired of listening and she says she feels judged.

Back in New Orleans, Tori comes to visits her parents. Tori tells her parents that Jesus told her to move back in with her parents. Guess he’s the one who sent the eviction notice? Her mom is disappointed and they share that they are going to have a lot of rules set for her once she moves back in. She has to be a good influence on her younger sister.

Kolby invited her dad to her mom’s house for dinner. Kolby announces that she has decided she wants to go to a fashion college after graduation. Her sisters begin asking questions and her mother chimes in. The girls think their mom is bitter about not wanting to pay for college, but she counters that she is bitter that their father won’t! The former couple begin fighting and Kolby is very upset.

It is the day of the Lake party for Megan and her friends and she is ready to let loose and have fun. Megan is drinking heavily and partying with her friends.

So what can we expect this season?? Pills, alcohol, drugs, partying, stripper poles, boys, promiscuity, and…church. It is going to be an explosive season!! Meet us here each week for all the juicy details about the show.