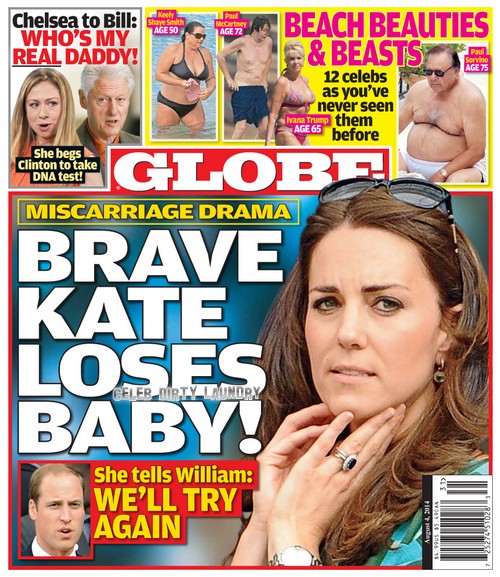 Kate Middleton has put on one heck of a brave face in spite of facing a crushing loss in recent weeks. The media has been speculating for quite awhile now that The Duchess of Cambridge is pregnant with her second child with Prince William and she even had allowed her childhood friend, Jessica Hay to confirm it to the Australian press. Unfortunately Jessica serving as Kate’s special messenger this time around (as she also did when Kate was expecting Prince George) was a huge mistake that the young royals didn’t catch in time.

According to the Aug. 4th print edition of GLOBE Magazine on a morning in early July Kate woke up feeling unusually sick. At first she thought that it was going to turn into the same type of morning sickness that she had in the early pregnancy stages with George but it became obvious pretty quickly that this was worse. The royals summoned Kate’s doctor and were told that she was suffering a miscarriage. Kate was ordered to bed for four days and has since been spotted in public performing her official duties as if nothing happened.

Sources say that the first and one of the only people that Kate and William shared the news with was Queen Elizabeth. She encouraged them to grieve and then move on knowing that they will give George a brother or sister when the time is right. Kate has decided to try for another baby as soon as possible and William is already vowing to make sure that her stress will be kept to a minimum. Do you think that Kate wishes she hadn’t told Jessica to talk to the press? Will she be making that mistake again? Tell us your thoughts on Kate’s recent tragedy in the comments below!

Prince Harry, Kate Middleton and Prince William attend the gymnastics during the Commonwealth Games on July 28, 2014 in Glasgow, Scotland. The Royals looked glum today – could that have to do with the miscarriage rumors?