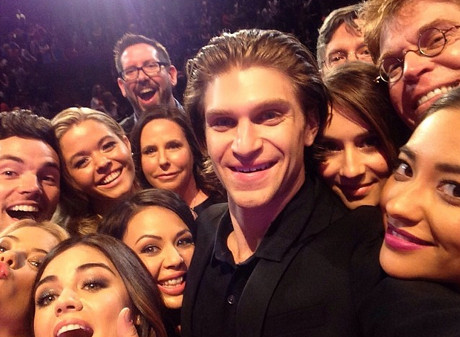 PaleyFest 2014 is officially under way and droves of TV stars are appearing in Los Angeles for the 2014 event, including the cast and crew of ABC Family’s popular teen drama Pretty Little Liars. Don’t know what PaleyFest is? Well, in short, it’s “The Superbowl of TV.” Cast and crews of television shows take the stage and share unaired clips or episodes with the audience, and then answer no-holds-bar questions from the audience about the shows, the behind the scenes action, and the writers’ overall creative processes and what routes they’re planning on taking their storylines.

ABC Family’s Pretty Little Liars has been a very popular event at PaleyFest the last few years, and yesterday the cast and crew of the popular TV series showed us why they are such a Paley hit. Keegan Allen, who plays the part of Toby Cavanaugh on PLL, tweeted an “Oscar Selfie,” recreating Ellen DeGeneres’ infamous Oscar Selfie.

Keegan captioned the photo, “Recreating oscar selfie with #pll cast at the Dolby theater. In the same place as @theellenshow -the spirit of social media :) love to the fans.”

Do you think Keegan and the PLL cast managed to pull off the iconic “Oscar Selfie?” Let us know what you think of the photo in the comment section below, and don’t forget to check CDL tomorrow for a full recap of the Pretty Little Liars Season 4 finale.