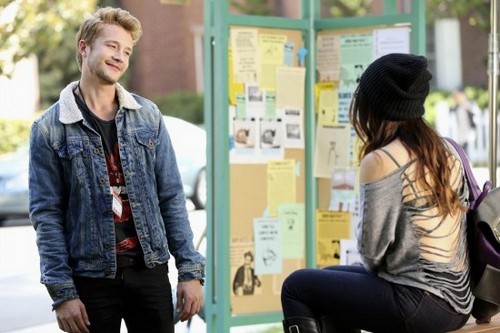 Tonight on the ABC Family PRETTY LITTLE LIARS continues with the 21th episode called, “Cover For Me.” On tonight’s episode two Liars try to dig up answers, while the other two try to come to terms with what they have learned.  Did you watch the last episode?  We did and we recapped it here for you.

On last week’s episode Aria grappled with Ezra’s betrayal while Spencer had to deal with the fallout from her addiction.  Spencer was determined that it was finally time to tell Aria about what she has found out about Ezra, but Emily and Hanna were worried about what it could do to their friend. A wrench was thrown into the plan when Ezra told Aria about his concern and suspicion of Spencer’s recent addiction problem. Now with Spencer’s credibility being questioned, can the girls trust what Spencer had been telling them about Ezra — could this all be a figment of Spencer’s tired brain or really just a clever ploy by Ezra to cover his tracks?

On tonight’s episode Emily takes up the sleuthing reins as she searches for answers about Ezra and Mona. After confronting both, Emily tries to make sense of the heartbreaking situation. Hanna, on the other hand, begins a new search after being confronted by Det. Holbrook and Lt. Tanner with a possible new lead in Alison’s case.  Meanwhile, Spencer and Aria lean on new men in their lives to recover.

Pretty Little Liars Season 4 Episode 22 “Cover For Me’ opens with Spencer returning home after three days of detox in rehab. Her Mom comes into her room and asks for her dirty laundry and Spencer snaps on her. She apologizes and says that she will be irritable for a few days. Spencer’s Mom offers to make her some food, but Spencer spaces out and has a flashback of her chasing Ali the night that she disappeared.

Meanwhile, Aria is partying at a frat house, pounding drinks, and making out with a random guy.

Spencer barges downstairs and finds a stranger sitting in her kitchen. Her Mom introduces him as Dean, he is going to be staying at the Hasting’s house to counsel Spencer. Her Mom tells Spencer that she can’t go to school for a few weeks, she has lost her car privileges, and demands that she hand over her laptop and cell phone. Spencer wants to call Toby and let him know what is going on, but her Mom says that isn’t necessary because she already spoke to Toby and told him what is going on.

Emily calls Aria to check on her, she is sitting in a park hung over, at a college campus. She tells Emily that she is in Syracuse for a campus tour. She runs into the guy she was making out with last night at the party and hangs up on Emily. The frat boy invites Aria to ditch the tour and get breakfast with her, she accepts his invite.

Emily and Hanna arrive at school, and Emily reveals that she saw Fitz’s car in the parking lot. Meanwhile, Mona and Mike are arguing in the hallway. They are convinced that Ezra encouraged Mona to date Mike to spy on Aria.

Emily heads into Ezra’s classroom to confront him. He tells her class doesn’t start for another few minutes. Emily calls him out and asks him why he tutored her, helped her through her break-up, and helped her with her college essays? She hands him her homework and says she won’t be staying for class, and asks him to make sure a REAL teacher gets her assignment.

Hanna runs into Det. Holbrooke at the café and apologizes for accidentally kissing him. She doesn’t want it to be weird between them. He asks Hanna to sit down, and shows her the note that Paige left in the cop car saying that Alison DiLaurentis is alive. Hanna asks him if he is going to start looking for Ali, and he says not to worry about it, it is probably from a “crack pot.”

Meanwhile Aria is laid up in a hotel room with the frat boy she met. She wakes up and realizes it is in the afternoon and they have missed all of the campus tours.

Spencer climbs into her bed, and realizes someone has filled it with dirt. She finds a note, “I know you dug her grave, and now I am digging yours – A.”

The next day Hanna fills Emily in on the note that Holrbooke received about Alison being alive. Hanna runs off when she sees Travis, and invites him and his family over for dinner. Travis says he would rather go out to dinner with Hanna, just the two of them. Hanna agrees to go out with him tomorrow night.

Emily calls Hanna out after Travis leaves, and questions whether or not she is even ready to date. Hanna reassures her that she is.

Meanwhile Spencer is arguing with her counselor Dean. He wants to know why she has been up in the middle of the night doing laundry, and Spencer explains her sheets were dirty. He says it’s not normal for people going through withdrawal from ADHD meds to be up all night, they generally sleep a lot. She asks him if she should be having hallucinations, and according to Dean sometimes when you go through withdrawals your repressed memories come up, things that you haven’t dealt with yet.

Aria and her now boy-toy head out to a pond, and sit on the dock chatting and getting to know each other. He confesses to her that he doesn’t want to go to SU, he wanted to go to Berkeley School of Music. Aria admits to him that “some jerk just broke her heart,” so she came to SU to disappear for a little bit.

Spencer and her Mom are washing dishes, and Mrs. DiLaurentis knocks on the door. She asks Spencer’s Mom for her RSVP to her charity event, Veronica heads in the other room to get it. She apologizes to Ali’s Mom for her outburst and blames it on a bad reaction to over-the-counter flu medicine. Alison’s Mom accepts her apology. But, then she makes a comment about “no mother should have to watch their child die” in reference to her charity. Spencer says she should head upstairs to bed, and Alison’s Mom chimes, “there’s nothing like a good night’s sleep on nice clean sheets.”

Aria’s friend stops by her hotel room and says he is leaving the campus tour a day early, he wants to go home and talk to his parents about Berkeley. Aria kisses him good-bye and tells him to look her up if he is ever in Rosewood.

Mike barges into The Brew, furious, he wants to know if Emily has talked to Aria. Mona texted him early this morning and broke up with him for no reason. He thinks Aria is behind her suddenly dumping him. Emily offers to talk to Mona for Mike.

Spencer and Dean are jogging through a trail in the woods, she passes a wheelbarrow with a shovel in it and has another rflashback to the night that Alison disappeared. In her flashback she is chasing Alison through the woods with a shovel. Alison trips over a stick and falls, and then Spencer hits her with the shovel and blood is spattered on Spencer’s face. Dean stops running and asks Spencer what happened. Spencer replies, “I remembered what I did.”

Dean takes Spencer back to her house and makes her a cup of coffee. Spencer confesses to Dean that there are things that happened that she doesn’t remember, so she is using other people’s memories to fill in the blanks. She still refuses to tell Dean what it is that she remembered. Dean tells her he is going to “give her some space so she can read a letter” and hands her a letter from Toby.

Hanna heads out to dinner with Travis. Just as they are sitting down, Mrs. DiLaurentis walks by and introduces herself to Travis, and asks Hanna if she is on a date. Mrs. DiLaurentis excuses herself and then Hanna watches her stop and talk to Detective Holbrooke.

Mona is backing out of her driveway and Emily is standing in the street waiting for her. She climbs into Mona’s car and asks her why she was helping Ezra. Mona laughs and says she is surprised it took them so long to figure out he was writing a book. She says she didn’t want to help Ezra though, she wanted to stop him. Mona could still go to jail for some of her exploits. She made a deal with Ezra that if she gave him details, he would leave out the parts that could get her arrested. She never read the whole book though, and she clearly has no idea that Alison is alive.

Aria arrives on Ezra’s doorstep. She tells him he needs to leave town. She doesn’t want to work things out with him.

Mona confesses to Emily that she dated Mike to spy on Aria, but she felt guilty because he was so sweet so she broke it off. Emily asks Mona what she got in exchange for helping Ezra. Mona says that Ezra knows who stole the “A Game” from her, and it wasn’t CeCe, she was helping her so that he would share that info with her.

Ezra confesses to Aria that he returned his publisher’s advance and pulled the plug on his Ali book. He hands Aria a copy of his completed manuscript and tells Aria that she should read it, he found out some things that may help her.

Spencer is reading her letter from Toby and she hears a phone vibrating. She breaks into her Mom..

[9:04:34 PM] Amanda Austin: desk and pulls out her confiscated cell phone. She has a text from Aria that says “SOS,” she rushes out of her house.

Hanna apologizes to Travis for being so distracted and blowing their date. She tells him she has to go and kisses him goodbye.

Hanna, Spencer, and Emily are sitting in Emily’s room trying to make sense of the Ali note that was left in the cop car. Aria barges in and says she read Ezra’s book and there was something that she wanted her to know. Aria announces that Ezra thinks that “A is Ali’s Mom.” Emily and Hanna don’t buy it, why would Mrs. DiLaurentis want them to stop trying to bring Alison home. Spencer confesses that Mrs. DiLaurentis thinks that she tried to kill Alison. Spencer confesses that she was drinking and taking pills that night and she thinks she may have went after her.

Emily says she is going to get snacks, and Hanna follows her out of her bedroom. She found a note with Paige’s handwriting and realizes she left the note in the cop car. She asks Emily is she told Paige that Alison was alive.

Aria heads home and finds her brother Mike on the couch. She apologizes for what happened between him and Mona, and he believes her that she didn’t try to break them up.

Spencer tries to sneak back into her house, but her Mom catches her. She demands that her Mom tells her what happened the summer Alison went missing, because she doesn’t remember. Her Mom tells her to “consider it a blessing.” Spencer heads upstairs and has another flashback of her Mrs. DiLaurentis walking up behind her while she is looking out the window.