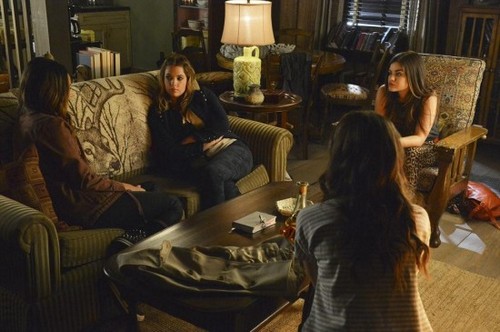 Tonight on the ABC Family PRETTY LITTLE LIARS continues with the 15th episode called, “Love ShAck Baby.” On tonight’s show the Liars take turns decoding Ali’s diary..  Did you watch the last episode? We did and we recapped it here for you.

On tonight’s show now that Hanna has shared with Aria, Emily and Spencer that she has Ali’s diary, the girls hope it can shed light on their many questions. But with the diary full of stories that have been coded to cover the truth, each girl must take a turn to figure out which stories are about them. Hopefully when they are through they will find the story that could finally give them answers to who has been going after Ali. But with each story more personal than the last, do Aria, Emily, Hanna and Spencer really want to admit which story is about them?  Meanwhile, Spencer is suspicious of her father’s latest interaction with Mrs. DiLaurentis.

Pretty Little Liars Season 4 Episode 15 “Love ShAck Baby” opens with Spencer, Aria, Emily, and Hanna looking at Ali’s journal in the morgue. They are upset that Hanna didn’t show them the journal sooner. Hanna thinks that some of the stuff in the journal is “personal” and they may not have wanted their secrets read. Emily nominates herself to read the journal first and find out what stories are or aren’t about her.

Later that night Emily is sleeping when Ali appears in her bedroom. Ali tells her “please don’t be mad.” She wants to explain to Emily why she lied about her death. She asks Emily “Aren’t you glad that I’m not dead?” Emily doesn’t respond. Alison picks up her journal that Emily fell asleep with, she says she thought she was smart “locking everything up in a journal, but they took everything from me.” Ali notices that Emily is still wearing her friendship bracelet…Emily’s alarm goes off and she wakes up. Her window is open, but she has no idea if she was dreaming or not. In her maybe dream she was wearing her friendship bracelet, and when she woke up it was in her jewelry box, not on her wrist.

Ashley Marin is getting ready for her first day of work at the DiLaurentis real-estate office. She reminds Hanna that no matter what happens between her and Caleb, she knows that their relationship was real.

Spencer is getting ready for work, and Toby is with her. He was supposed to meet her Dad, Peter Hastings about shutting down Radley. Spencer reminds Toby that she thinks her Dad is up to something, and he has a hidden agenda for wanting to shut down Radley.

At Rosewood High-School Ezra is creepily watching Emily. She is sitting at a table reading Ali’s journal, and Ezra obviously recognizes it and does not look happy.

Spencer and Aria are arguing in the hallway about Ezra. Aria is denying being in love with Ezra. They join Emily at the table to check on her diary decoding status. Hanna joins them. She reveals that Caleb broke up with her and went back to Ravenswood. Hanna reads a poem that out loud from Ali’s journal. Aria realizes that the poem is about a place called Busy Bee Inn, a closed Bed & Breakfast. They decide to go to the Inn and check it out, they think she may be hiding there. Meanwhile Ezra is lurking around the corner listening to their plans.

Emily is at work at the café. She finds a note in her bag, “Meet me at our spot. I want to come home.” She rushes out of the café and has a friend cover her shift.

Aria pays Ezra a visit in his classroom. He says he is writing a story, but it’s not ready for “public consumption yet.” Aria was supposed to hang out with Ezra after school, she tells him that Hanna and Caleb broke up and she needs to spend time with her. Ezra wants to know where they are going, but Aria tells him she doesn’t know. He tells her that last night when he was with her it “felt right.” Aria leaves, and Ezra gets back to work. He is actually listening to recordings of Ali. Ali is saying, “You still can’t see who is threatening me. I need to figure out where to go, some sort of escape. I need a way to not be Alison DiLaurentis anymore. Please help me.”

Emily is walking through the woods, to the Kissing Rock, apparently that was her and Ali’s “spot.” She sits on the rock and waits.

Spencer is on the phone when she overhears her Dad talking to Alison and Jason’s Mom. Mrs. DiLaurentis reveals that she and Ali’s Dad are getting a divorce, and Peter Hastings is giving her legal advice.

Hanna is at the café, and she runs into Travis (the gas station attendant). Travis reveals that the cops are looking for CeCe Drake. They think that someone paid her to kill Wilden. They just seen her at a train station in Maryland, but she got away. Travis asks how Caleb is, and Hanna says “he is fine.”

Spencer is yelling at her Dad. She thinks Jessica and Peter are having an affair again. Peter confesses that he cancelled his meeting with Toby because he heard from Radley, and Marion Cavanaugh’s death was an accident. She slipped and fell off the roof on her own, but they covered it up to protect another patient who was on the roof with her and witnessed it.

Emily is still at the Kissing Rock and Ali didn’t show. She left her friendship bracelet on the rock and left.

Spencer runs into Jessica DiLaurentis at the café. She tells her to find another lawyer that “she hasn’t slept with, and to leave her family out of it.”

Ezra is paying a house-call to Ashley Marin. He tells Ashley that Hanna is currently failing his course, he volunteers to tutor her after-school. Ashley takes a work call in the other room, and leaves Ezra in the living-room. He sneaks upstairs.

Spencer is trying to find out who “Suzy Clueless” is in Ali’s diary. They realize that Suzy Clueless is the name she used for Aria. Another one of the journal entries is about a cradle robber. Apparently one of Ali’s friends was having a relationship with someone much younger than her.

Meanwhile Ezra is upstairs ransacking Hanna’s bedroom. He didn’t find what he was looking for in her purse, so he gets on her laptop.

Halfway to the Busy Bee Inn, Emily’s car dies, in the middle of the woods. Hanna texts Travis to come rescue them with his tow-truck. Only he won’t arrive for two hours. It’s about to rain. Aria takes them to Ezra’s cabin in the woods, she lies and says it is her Uncle’s.

On the walk to the cabin, Spencer questions Hanna. She realizes that a page is missing from Alison’s journal, and she thinks Hanna is the one that tore it out before she handed it over to them. Spencer thinks Hanna knows who the cradle-robber is. Hanna denies it. They finally arrive at Ezra’s cabin. Hanna heads to the bathroom, and Spencer tells Aria and Emily that Hanna is “hiding something from them.”

Hanna comes out of the bathroom and confesses to them that the “cradle robber” is her. She admits that she was hooking up with Aria’s little brother Mike. Alison caught Hanna and Mike hooking up one night during a sleep-over. Hanna has a hefty-Hanna meltdown and cries that she’s “not skinny or pretty,” and that’s why she hooked up with Mike. Ali agrees to never tell Aria Hanna’s secret. Aria reassures Hanna that she’s not made about her hooking up with Mike. Hanna admits that she is actually more upset about Caleb, and confesses that Caleb left her.

Hanna heads outside to see “where the hell Travis is,” and Emily follows her to try to talk to her. They hear something in the woods.

Spencer and Aria head into the closet to get some blankets. Someone slams the door shut, and locks them inside. They look through the keyhole and see someone walking around the cabin dressed in black. Emily and Hanna hear them screaming and rush back to the cabin. The front door is locked so they break through a window, and let Aria and Spencer out of the closet. They realize that “A” has stolen Ali’s journal from them. He also left Emily’s bracelet, which she left on the Kissing Rock. Travis knocks on the cabin door, he has come to tow their car.

Travis heads home with Hanna after he rescues them from the woods. Hanna tries to pay him for the tow, but Travis won’t take her money. He says he just “wants to be a nice guy.” He touches Hanna’s hands to give her back the money, and she has a melt-down and bursts into tears.

Spencer arrives at home, and her Dad is in the kitchen on the phone. He is not happy that Spencer yelled at Jessica DiLaurentis. He tells her he forbade her from talking to Jessica and she “disobeyed him.” He tells her to stay away from her or she is going to ruin their family.

Aria calls Ezra, and he tells her that he loves her.

Spencer pays Toby a visit, suitcase in hand. She wants to stay with Toby, after her blowout with her Dad.

Emily confesses to Aria that she went to meet Ali by herself, and she didn’t show. Then they receive a text message from “A.” It is a picture of the Busy Bee Inn, and it says “Thanks for the tip. Kisses-A.” Ezra/A stole the journal, and they had already decoded most of it and it was filled with post-it notes of what the secrets really meant. They realize they just “handed Ali to “A.”

The episode ends with “A” on the computer, he has remote access to Emily’s car. Her car didn’t die in the woods, he went on the computer and shut down her engine.