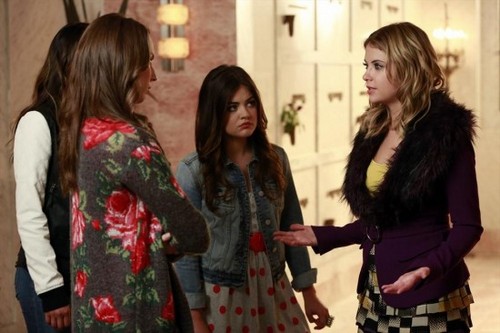 Tonight on the ABC Family PRETTY LITTLE LIARS continues with the 14th episode and the second half of its fourth season called, “Who’s in the Box.” On tonight’s show armed with the knowledge that Alison is alive, Aria, Emily, Hanna and Spencer have more questions now than ever before.  Did you watch the finale of season 4A? We did and we recapped it here for you.

In the Pretty Little Liars summer finale fans were shocked when it was revealed that Ezra Fitz (Aria’s boyfriend and the liars’ English teacher) was the “Head A.” He has been watching the girls, stalking them, tormenting them, and nearly killing them a few times since the series began. Read our spoiler round-up here to get the jump on all that you can expect in season 4B.

The Season 4B premiere of Pretty Little Liars opens with Aria, Emily, Spencer, and Hanna trying to make sense of Ali faking her death.  Emily is convinced that Ali is just playing a game with them, and she has been “A” this entire time.  Spencer thinks they should call Jason and see if he knows she is alive.  Hanna has a theory.  She wants to find out who is in Ali’s grave, if they can figure out who was killed that summer, it may lead them to the reason why Ali faked her death.

Mrs. DiLaurentis is changing the sheets on Ali’s bed.  Emily pays her a visit and questions her about where Jason is.  Mrs. DiLaurentis has no idea, he told her he was driving across the country and visiting some friends in Montana.  She has a number in case of emergencies to reach him, but Emily reassures her that it isn’t an emergency.

At the Marin house Hanna’s Mom Ashley is struggling to find a job.  She received a phone call from the last place she interviewed at and they decided not to hire.

Emily fills Aria and Spencer in on her chat with Mrs. DiLaurentis.  Toby surprises Spencer at school, he has been gone for a week searching for answers about his Mom’s death.

Emily joins Paige in the cafeteria, and their chat turns into an argument.  Paige is prying Emily for answers about why seems distant and upset, and Emily snaps on her.

Mona tracks Hanna down at her locker, and offers to take her for a ride in her new car, which is Jenna’s old mustang.  Hanna declines.  Mona wants to know why Hanna is giving her the cold shoulder.

In English, Ezra Fitz is lecturing his class on Dr. Jekyll and Mr. Hyde.  After the bell rings he asks Aria to stay behind and speak to him.

Hanna, Spencer, and Emily slip into an empty classroom so Hanna can show them something on her laptop.  She found another girl that went missing from Cortland the same weekend Ali went missing, she is about the same height, weight, and has blond hair also. Her name is Sara Harvey.  Hanna emailed her friends and said she had a lot in common with them (her friends went missing too) and offered to set up some sort of support group.  While the girls are looking at the website, a TV in the empty room turns on and a video plays.  The creepy black and white video looks like it was made in the 50’s, and shows students in classrooms, the video zooms in on the blackboard which says “Ali, Ali Oxen-free.  Whoever finds her, gets to keep her. –A”

Aria is still talking to Ezra.  He is apologizing for letting her go, he felt like he had to choose between her and his son Malcolm.  He tells her that after she graduates he wants them to try to be in a relationship again.

Spencer heads home and questions her Dad about Jason.  He doesn’t know where he is.  He agrees to try to find him as long as she promises to stay away from Mrs. DiLaurentis.

She goes to Toby’s house so he can fill her in on his Mother.  He has tracked down six people that were working at Radley while his Mom died there.  None of them will confirm that his Mom didn’t commit suicide though because they don’t want to lose their pensions from Radley.

Hanna is at the café trying to convince Aria and Emily to to go with her to meet a girl named Tina that was friends with Sara Harvey.  Emily doesn’t want to go, she is still bitter about Ali being alive.  She is hurt that Ali has been alive this entire time and didn’t tell them.  Caleb Rivers walks through the door and surprises Hanna (he has been away in Ravenswood).

Caleb and Hanna get a table and catch up.  He doesn’t want Hanna to visit him in Ravenswood because it is “complicated.”

Spencer and Toby head to Decoldyna, the company that owns Radley Sanitarium.

Emily and Hanna are visiting with Sara Harvey’s friends.  Their friend Sara disappeared the day after Labor Day.  A girl named Avery seen her riding her bike to school, they found her bike but they never found her.

Mona runs into Ezra.  She says she is jealous that he is so close to Hanna, Emily, Aria, and Spencer.  She wishes she had a “mentor” like him.

Hanna is upset, she calls Spencer and fills her in on their meeting with Sara Harvey’s friends.  She says the “dates don’t work,” a girl named Avery seen Sara the day AFTER Labor Day.  They had already cemented Ali’s backyard by then, there is no way her body could have been in it.  Hanna’s Mom surprises her, she has a guest, Mrs. DiLaurentis.  Ashley is going to work at the DiLaurentis real-estate agency.  Mrs. DiLaurentis confesses to Hanna that she still sees Alison in her dreams.

Mona is still chatting with Ezra.  She thinks it’s coincidental that Ezra is always making them read books about “secret identities and masks.”  Ezra tells Mona that she is special, because she is “fearless.”  But the thing about being fearless is that she doesn’t know when she is “pushing someone too far.”

Hanna and Caleb are sitting outside talking, she is getting annoyed because every time she asks him a question about Ravenswood he says “it’s complicated.”  He breaks the news to her that he is going back to Ravenswood, he made people some promises and he needs to keep them.  Hanna is less than thrilled.

Aria has called Ezra to meet up with her, he pick her up while she is walking down the street and says he is going to take her somewhere to talk if she doesn’t mind a little drive.  She agrees and hops in the car with him.

The café is closed, and Emily is cleaning up the tables.  Someone is banging on the door, it is one of Sara Harvey’s friends, her name is Claire.  Emily lets her in to talk.

Ezra has taken Aria to a cabin in the woods where he goes to write.  He confesses to her that he wishes he has a time machine, so that he can go back in time and fix all his mistakes.  Aria reminds him that she is seeing someone, Jake.  Ezra gives her a key to the cabin, he wants it to be “their cabin” and for her to keep it secret.

Claire says she stopped by the café because she wanted to explain why her friend Avery didn’t make it to the meeting.  She says that Avery (the last person to see their friend Sara alive) is heavily medicated, and messed up now, all she does is sleep.  She also confesses that her friend Sara wasn’t a “good person.”  Sara was pretty and manipulative just like Ali.  Claire is jealous of Emily and Hanna because Ali’s body was found, and they are done.  Claire admits that she wished Sara was dead before she disappeared, and then she runs out of the café crying.

Caleb is trying to head back to Ravenswood.  Hanna doesn’t want him to go, but he says “Miranda needs him.”  Hanna is convinced that he is cheating on her with Miranda.  Toby storms out of her house, Hanna is heart-broken.  Her Mom Ashley tries to comfort her.

Spencer is upset with her Dad.  He offered to help Toby shut down Radley (he is a lawyer).  She is skeptical about why he wants the mental hospital shut down.

Ezra and Aria are spending the night together in the cabin.  What Aria doesn’t realize is there a creepy trap door on the floor, half covered with a rug, that Ezra keeps looking at nervously.

Emily is confessing to Paige that “Ali let her kiss her once,” and she was heart-broken when she realized it meant nothing to Ali and the world to her.  Paige is happy because she thinks Emily is finally “letting go” of Ali (little does she know she actually just learned she is alive).

Hanna tracks Caleb down at his car, and says good-bye to him, she doesn’t want things to end on a bad note.

Hanna, Spencer, Emily, and Aria head to Alison’s grave to stare at it some more, they still have no idea who is buried in her place.  Hanna reveals that she stole Ali’s diary from A’s lair.  She hands it over to Spencer.

“A” is in Ezra’s cabin, and preparing to open the trap door in the floor….