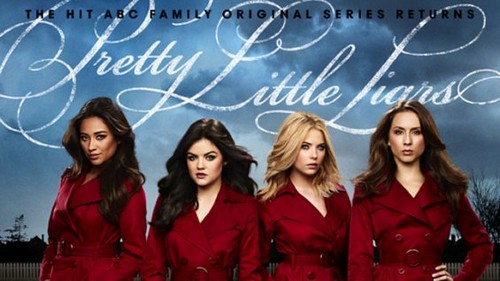 Mona Vanderwaal hasn’t had the most romantic storyline on Pretty Little Liars, other than her weird fling with Noel Kahn, the girl has been pretty much celibate. But, all that will change in 4B! Janel Parrish revealed in an interview that Mona’s love interest would be a shocking one. Some rumors are swirling around the internet that the reason Mona’s love interest is so “shocking” is because it is a GIRL, and possibly Shana. (In the 4A finale we find out that Mona has been spending time with Shana).

Who Pushed Ian Off The Bell Tower?

Pretty Little Liars is notorious for its unanswered questions, but one particular question has been haunting fans since Season 1. Who pushed Ian off from the bell tower? Well, in Season 4B we will finally find out! A fan asked show-runner Marlene King on Twitter if we would ever know who pushed Ian off the bell tower. And King replied that we will find out in Season 4B.

Toby Cavanaugh Will Not Be In The 4B Finale

Bad news for Spoby shippers, Toby Cavanaugh will not be in the Season 3B Finale. The day that the Pretty Little Liars cast was shooting the finale, Keegan Allen was in NYC at his play “Small Engine Repair.” He even tweeted members of the cast on the day that they were filming the finale and told them how much he missed them.

Noel Kahn is Back!

Apparently after Marlene King Brant Dougherty on Dancing With The Stars Season 17, she realized how much of a fool she had been for writing him out of the storyline, because he will be back in PLL Season 4B. Brant even posted photos on Instagram of him and his dancing partner Peta goofing around on the set of PLL.

Ezra Is Probably NOT Head A

On November 2nd a fan tweeted Marlene King (the PLL writer and show-runner) on Twitter and asked her “when do we find out who the real Head A is?” Marlene replied, “when the show ends.” Well, we know that there is still at least a season and half remaining of PLL, and that is if they don’t get a Season 6 renewal. It looks like the big Ezra twist is just that, a twist, and there is still another “uber A” out there that we don’t know about.

Mrs. DiLaurentis Was With Ali The Night She Was Buried Alive

Know how we always joke about half of Rosewood being in Ali’s backyard the night she died? Well you can add Mrs. DiLaurentis to that never-ending list. A BTS photo was posted on Instagram of Andrea Parker and Sasha Pieterse, and Sasha is wearing the infamous yellow shirt that Alison was wearing the night she died. Translation? We will see a flashback of Alison and her Mom the night someone tried to kill her in Season 4B!

The 4B premiere is set to air on January 7th, and the title of the episode is “Who’s In The Box?” Pretty Little Liars episode titles are generally a cryptic clue about what the episode is going to be about. “Who’s In The Box” most likely is referring to Ali’s casket, since the liars now know she is definitely alive, they are probably trying to figure out who is buried in her grave.

Caleb Is Back In Rosewood

Fans were devastated when Caleb left his long-time girlfriend Hanna Marin (Ashley Benson) and headed off to the supernatural town of Ravenswood. But, he will be back! In the promo for “Who’s In The Box” Caleb is back in Rosewood, unfortunately it doesn’t look good for Haleb shippers, Hanna and Caleb are having an intense argument.

Jake Is Still In Town

Pretty Little Liars guest-stars have a way of falling off the face of the earth with no explanation, not Jake though! He will still be around in 4B, and will still very much be a part of Aria’s life. Now that we know Ezra may not be too mentally stable, Jake may be in danger!

Ravenswood (the supernatural town and PLL spinoff) is still very much a part of the Liar’s lives. Ashley Benson confirmed on Twitter that she and Shay Mitchell (Emily Fields) were filming in Ravenswood. Apparently the pair didn’t get enough of the creepy town on Halloween and head back for some more in 4B.

Troian Belisario, the actress that plays Spencer Hastings, has teased multiple times in interviews and on social media sites that Spencer has been keeping a secret and it will be revealed in 4B. Apparently there is a reason Spencer was out wandering around when Alison was thrown in a hole in her backyard, and we are going to find out what she was doing that night while her friends were asleep. It’s such a HUGE secret that it actually drives a wedge between Spencer and Toby.

There really is nothing scarier than Ezra or Mona (they’re both nuts!), except for the thought of Ezra and Mona working TOGETHER! And, it looks like they will be doing just that in Season 4B. In one of the promo videos ABC Family released for the upcoming season, Mona and Ezra are sitting at a table together and speaking in hushed tones. Yikes! Mona and Ezra working together is one dangerous combination.

In an interview with Entertainment Weekly Marlene King revealed there will be a new man in Hanna Marin’s life. Who can really blame her, Caleb ditched her and ran off to Ravenswood with Miranda. According to King, “there’s a new character who becomes part of Hanna’s life while Caleb is in Ravenswood.” There is no news yet on who that character may be, or who will be playing them.

Lucy Hale teased in several interviews that in Season 4B her character Aria will find out that her boyfriend Ezra has been working for the A Team. And, it isn’t going to be pretty. Hopefully Aria won’t end up in Radley like Spencer did!

The title of Pretty Little Liars Episode 4.21 has been revealed to be “She’s Come Undone.” Although there hasn’t been much information on the episode yet, fans have speculated that the “she” is Aria, and this will be the episode that she finds out Ezra has been working on the “A Team,” hence the reason she come’s “undone.”

Cece Drake Will Be Back

In the Season 4A finale the liars found out that Cece Drake has been impersonating Alison and running around in a Red Coat making the liars miserable. She’s not done though! She will be back in Season 4B, Oliver Goldstick confirmed in an interview

Since day one the PLL writers and cast have been denying the idea that they were going to follow the storylines in the PLL books and give Alison DiLaurentis a twin. Well, guess what, they are still denying it. According to Goldstick we shouldn’t expect to see a twin in Season 4B.

Fans have speculated for a while now that Ezra may be Alison’s mysterious older boyfriend known as “boardshorts.” Well, according to Marlene King Alison and Ezra do have a history! On twitter a fan asked Marlene when Alison and Ezra met each other, and King replied “you will find out in 4B.”

Skyler Day of NBC’s Parenthood will be guest-starring in Pretty Little Liars 4B. According to IMDB day’s character is named “Claire,” there is no news yet on how or if Claire will affect the Season 4B storyline yet, but she did post some really cute BTS photos on her Instagram account.

Mike Montgomery Is Still In Rosewood

Aria’s little brother Mike has been written in and out of the scripts multiple times. At one point he was literally MIA for nearly two seasons. It looks like we will get to see some of Cody Christian in Pretty Little Liars 4B. He is slated to appear in at least one episode, Episode 4.20 “Free Fall” (which is scheduled to air in February 2014).