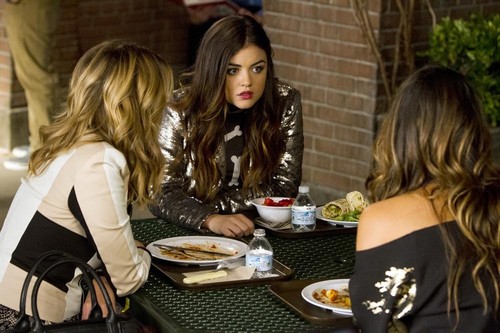 Tonight on the ABC Family PRETTY LITTLE LIARS continues with the 18th episode called, “Free Fall.” On tonight’s episode Spencer’s addiction could get in the way of the girls’ plans.  Did you watch the last episode?  We did and we recapped it here for you.

On last week’s episode Spencer’s numerous sleepless nights with the help of prescription pills started to take a toll on her as her hunt for Ali and much needed answers continued. As she pours over newly acquired information, her world view took a black and white turn. Now teleported into the world of 1940′s Film Noir, Spencer tried to come up with the answers she and her friends had been desperately looking for.

On tonight’s episode Spencer is determined that it is finally time to tell Aria about what she has found out about Ezra, but Emily and Hanna are worried about what it could do to their friend. A wrench is thrown into the plan when Ezra tells Aria about his concern and suspicion of Spencer’s recent addiction problem. Now with Spencer’s credibility being questioned, can the girls trust what Spencer has been telling them about Ezra — could this all be a figment of Spencer’s tired brain or really just a clever ploy by Ezra to cover his tracks?

Pretty Little Liars Season 4 Episode 20 “Free Fall” opens with Spencer waking up at Ezra’s desk in his classroom, it looks like she fell asleep reading Alison’s diary.  Ezra walks in and asks Spencer if she is all right.  Spencer says she is fine, and just really tired.  Ezra tells her that the “path she has been going down in very dangerous.”  The bell rings, and Spencer rushed out of the classroom.

Since she slept at school, Spencer heads to the bathroom and put son her gym clothes and shower shoes.  Emily and Hanna meet her in the bathroom, and are not impressed with her outfit.  Spencer wants to tell Aria about Ezra ASAP.  But Emily and Hanna think that school is the last place to tell her, they convince Spencer to put it off.

Ezra stops Aria in the hallway, and tells her there is something wrong with Spencer.  Aria thinks she is just a “total stress case.”  Ezra interrupts Aria and tells her that Spencer is obviously addicted to drugs, and she is a “ticking time bomb.”  He pulls out Spencer’s case file, and shows Aria something in Spencer’s student file.

Toby is waiting for Spencer outside of school, he wants Spencer to go for a ride with him.  Spencer turns him down and says she has to study for a quiz.  Toby thinks that Spencer is still mad at him for accepting the settlement from Radley.  Spencer says she was just a “little disappointed.”  Toby guilts her into grabbing a sandwich with him.

Emily and Hanna are eating lunch in the quad, they have both been avoiding Aria all day.  Aria tracks Emily and Hanna down at lunch and tells them Spencer has a drug problem.  She says that two years ago she had “such a drug problem her parents asked the school to help her get clean,” she shows them the file that Ezra gave her in the hallway.

Emily, Hanna, and Aria head to Spencer’s house after school.  Hanna asks Spencer is she is a “speed freak”?  It is pretty clear that they staged an intervention.  Spencer denies having a pill addiction.  But, Aria pulls out the file that Ezra gave her and shows it to Spencer.  Spencer is irate that Ezra gave her the file, she flips out and tells Aria that “Ezra is “A.”  Aria doesn’t seem to hear or care what Spencer said about Ezra.

Spencer breaks into tears, and says “this is brilliant.”  Spencer starts rambling about her black-and white dream, and her friends think that she has totally lost it.  She tries to grab her purse to leave, but she spills all her belongings on the counter, including Wren’s prescription pad.  Spencer swears that she has never seen the prescription pad before and someone planted it in her purse.

Meanwhile, Mona and Aria’s brother Mike are out on a romantic date.  Mona confesses that she “really likes Mike.”  Mike asks her if she loves him, but she doesn’t respond.  Ezra walks into the grill where Mona and Mike are eating, and Mona begins acting weird, she excuses herself and heads over to Ezra.  Mona doesn’t seem happy to see Ezra, she tells him that she “can’t help him anymore and it has gotten complicated.”  Ezra tells Mona “backing out isn’t an option.”

Hanna and Emily are trying to make sense of the Ezra and Spencer mess.  Ezra comes back in and tosses a bag of pills on the counter.  She tells Hanna she “doesn’t need them anymore.”  She knows they don’t believe her anymore, but she wants to prove to them that “Ezra is definitely A.”  She pulls out Alison’s diary and tells them that Ezra used to meet Ali at Amber’s Pavilion.  She wants to stage a fake meeting with Ali at the pavilion, and see if Ezra shows up.  If Ezra shows up, then he is definitely A.

The next day Spencer calls Toby and tells him she won’t be able to hang out with him, because she is going to the country club with her Mom.  She actually is going to Amber’s Pavilion with Hanna and Emily to try and set up Ezra.

Aria is at Ezra’s house, discussing Spencer’s drug problem.  Ezra wants Aria to tell Spencer’s parents about her drug problem.  Aria doesn’t want to do that yet though, she thinks Spencer can get herself out of this.  Ezra tells Aria, “if seeing a motorcycle helmet and a tattoo in the woods was enough to unravel her and send her to Radley” then she is going to need help.  Aria is confused, she never told Ezra about the fake dead Toby in the woods, how did he know about the matching Toby tattoo?

Emily is working at the Brew, and setting up Ezra.  She stages a phone call in front of him while he is there and says on the phone that she is meeting Ali at Ambrose Pavilion at closing.

Spencer is going through some serious pill withdrawal, and looks like she is about to pass out.  She calls her Doctor’s office, pretending to be her mother, and leaves a message.  Then she calls her study buddy Andrew to see if he has anymore pills.

Aria is doing some sleuthing of her own.  She is at Ezra’s cabin in the woods, after a few tries, she figures out the password on the security system and disarms it.

Spencer’s mother Veronica receives a phone call from the Doctor’s office regarding Spencer’s prescription, at first she is confused, and then she puts two and two together and realizes Spencer must have called.

Aria discovers the trap door in the floor of Ezra’s cabin, and heads downstairs.  Nothing looks out of the ordinary, the basement appears empty.

Emily and Hanna make it inside of Ambrose Pavillion, but there is a hitch in their plans, Spencer is MIA.

Aria climbs back out of the basement of the cabin and closes the trap door.  She finds a transcript inside a book on the coffee table, it looks like a story that Ezra was writing.  She reads the first paragraph, “the first thing Alison ever told me was a lie, she could lie while she was laughing, and lie while she was kissing me.

Ezra pulls up outside of the cabin, Aria panics and shoves the manuscript in her purse and runs out the back door.  Unfortunately, she left her keys on the counter.  Ezra finds her keys and recognizes them, he doesn’t look too pleased.

Aria is trying to make her way through the woods in the dark, she can’t take her car since she left her keys inside.  Ezra is chasing after her and yelling her name.  Aria manages to get away from him without him catching her, and finds a ski lift to a nearby lodge.

Spencer finally arrives at Ambrose Pavilion, with a blond wig to impersonate Allison.  They realize that the real they were watching the real Alison pick up the money they left for her, they thought it was Spencer in a wig the whole time.  Suddenly all of the lights turn off inside the Reptile hut, and they begin panicking.  A zoo attendant comes and tells them they have to leave the hut.

Meanwhile Aria is trapped on a ski lift with Ezra, which miraculously stopped high in the air.  Aria is stuck in the air with Ezra.  Ezra confesses that he knew Alison, he met her when he was in college.  When he read in the papers that she was missing, he decided to write a true crime book.  Ezra confesses that he already knew who Aria was when he met her at the bar, and he took the job at Rosewood High to get closer to Alison’s friends.  Ezra confesses that he really did fall in love with Aria, so he quit writing the book.  But, when they broke up he found out that Alison was alive and he started writing it again.  Ezra tries to take the manuscript from Aria, but she refuses to let go of it.  She accidentally drops it out of the ski lift and the pages flutter to the ground.

Mike and Mona are hanging out at the Montgomery house, and Aria stumbles in looking like a hot mess.  Mona asks Aria if she is okay, but Aria just stands there in a trance.

Spencer heads home and is met by a very unhappy Toby.  Her Mom called him over, because she knows about Spencer’s drug problem.  Toby leaves and her Mom confronts her, she can’t believe Spencer is abusing pills again, her Mom tells her that her and her Dad can’t “cover for her like they did two years ago” (ironically when Alison went missing).  She says that when Spencer was abusing pills two years ago, “half the time she didn’t even know what she was doing.”

Aria is in her room throwing a temper tantrum and destroying books that Ezra had given her.

The episode ends with someone in black gloves and a black hoodie picking up the pages of Ezra’s manuscript from underneath the ski lift.