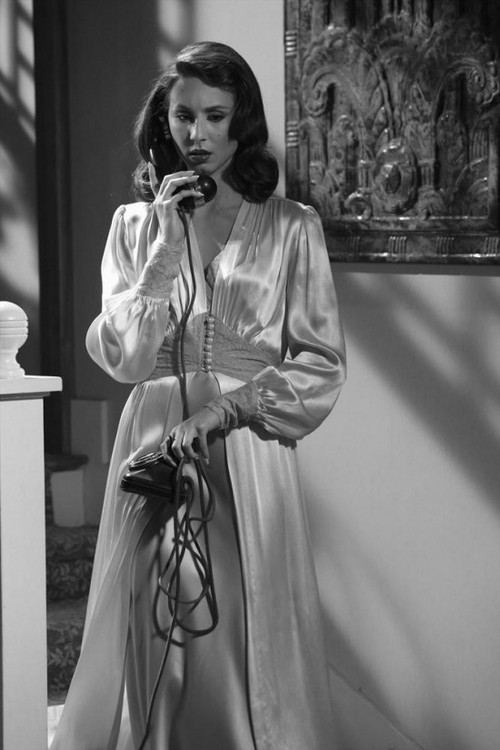 Tonight on the ABC Family PRETTY LITTLE LIARS continues with the 18th episode called, “Shadow Play.” On tonight’s now teleported into the world of 1940′s Film Noir, Spencer tries to come up with the answers she and her friends have been desperately looking for.  Did you watch the last episode?  We did and we recapped it here for you.

On last week’s episode with Spencer’s possible Board Shorts revelation, she was now more determined than ever to prove her theory before bringing it to the other girls’ attention – especially since it could have a devastating effect on one of the Liars. But with many sleepless nights fueled by prescription medication, Hanna started to notice Spencer’s odd behavior. Meanwhile, Emily looked to make amends with Alison through Shana, and all of Aria’s lies started to take a toll on her.

On tonight’s episode Spencer’s numerous sleepless nights with the help of prescription pills start to take a toll on her as her hunt for Ali and much needed answers continues. As she pours over newly acquired information, her world view takes a black and white turn. Now teleported into the world of 1940′s Film Noir, Spencer tries to come up with the answers she and her friends have been desperately looking for. But in this world of fedora hats, switchboards and 15 cent coffee, can Spencer finally put all of the pieces together that lay in front of her?

Pretty Little Liars Season 4 Episode 19 “Shadow Play” opens with Hanna, Emily, and Spencer breaking into Ezra Fitz’s classroom. They are searching for evidence that Ezra is up to something so they can prove it to Aria. They find Ali’s diary in an envelope in Ezra’s desk. After they leave Ezra’s classroom they hear a noise, and hide in the hallway. Mona is sneaking into Ezra’s classroom too, she takes a stack of files out of his classroom.

Spencer, Hanna, and Emily head to Spencer’s house to try to make sense of their latest discovery. Shana is missing, and she is the only person that knows how to contact Alison. Spencer and Hanna want Emily to talk to her girlfriend Paige and see if she can did up any clues as to where Shana may be hiding.

Aria and Ezra are in the car on the way back to Rosewood. Aria is discussing a short story she is writing, she confesses that lately she has been obsessed with villains (how ironic).

Spencer is at home alone, watching a creepy noir film and getting drunk and popping pills. The next thing she knows, she is seeing things in black and white. Toby pays her a visit, in 1940’s apparel. Spencer’s life just transformed into a 1940’s movie.

Toby wants to know what Spencer knows about Alison, Spencer tells Toby he just needs to trust her. He knows she is taking pills, and he doesn’t seem impressed.

Spencer heads to The Brew and runs into Ezra. He apologizes for their last conversation and then offers to buy her dinner at the Hart and Huntsman. He makes Spencer promise that she will go out with him.

Spencer heads to school and fills Hanna and Emily in on the Ezra drama. Spencer reveals that she thinks Aria is still dating Ezra. Aria barges in and they ask her about her trip to Syracuse. The bell rings and the head to class.

After school Spencer does some more sleuthing and pill popping. Toby catches her, and warns her that the pills “aren’t going to help her figure everything out.” Toby points out a huge mural of Alison hanging on her wall, and blames Spencer for being too high to notice it hanging on the wall. Spencer hints to Toby that Alison may be alive.

Meanwhile Mona and Ezra are hanging out at his apartment, Hanna catches Mona closing the blinds.

Emily and Paige are at The Brew, Emily is questioning Paige about her summer fling with Shana. Paige confesses that when she was with Shana, she was thinking about Emily the whole time. She doesn’t share any clues about Shana’s whereabouts though.

Mona is walking down the streets of Rosewood at night, Hanan is following her, trying to see what she is up to. Mona wasn’t born yesterday though, she catches Hanna following her.

Spencer receives a phone call from Mona in the middle of the night, she tells Spencer to come over to Apartment 3B (Ezra’s house) to pick up her “blond package.” Ezra wants to know why Spencer had Hanna sitting outside his house. He tells Spencer that she is “in over her head.” He dares her to tell Aria what she thinks she knows about Ezra, and then reminds her that she can’t tell Aria because she isn’t sure.

Spencer and Hanna storm out of Ezra’s apartment. Spencer tells Hanna that she traced the number on Alison’s list and it was to the Fitzgerald Art Institute (as in Ezra Fitzgerald).

Ezra meets up with Toby, and tells Toby that he has some “information for him.” Ezra tells Toby that Alison DiLaurentis is alive, and Spencer Hastings knows how to find her.

Spencer is shocked to find Ali standing in their livingroom. Spencer demands to know why Alison didn’t tell them about Ezra. Spencer gets irritated and asks Alison if she is scared of Ezra, Alison says Spencer is being “scary and she should be scared of her. Spencer has a meltdown and dumps her pills down the sink, she is reaching down the drain trying to get them out, when Toby catches her. Toby begins questioning her about Alison, Spencer denies that she is alive. Toby thinks that maybe Spencer helped her fake her death.

Aria is hanging out at Ezra’s apartment with him, she confesses that she wants to tell her friends that they are back together. Ezra doesn’t think it is a great idea, he isn’t sure if she can trust her friends. Ezra says that he knows one of Aria’s secrets, and tells her that he knows Alison is alive.

Toby is still questioning Spencer, he wants to know how to contact Alison. He knows if Spencer puts the clues together she can solve the puzzle. But, Spencer doesn’t wants to put the pieces together, she “just wants to sleep.”

Aria is sitting at The Brew, and Spencer runs into her. Aria confesses to Spencer that she has been dating Ezra again. She liked Jake, but she loves Ezra. Aria says her relationship with Ezra “was perfect, but she thinks the story is changing.” Spencer is about to tell Aria the truth about Ezra, but then Hanna barges in and interrupts.

Hanna tracked down the number that Alison was calling from, to a payphone outside a club. They rush to the club and find Alison backstage, she looks a 1940’s stripper. Alison tells them to “get the hell out.” She didn’t want to be found. Spencer snaps on Alison and calls her out, she thinks Alison is setting them up and using them as pawns and decoys in a much bigger game. Someone shoots at the girls, they all run out of the room and into a warehouse. Ezra is calling for Aria and telling her it is “safe to come out.” Her friends don’t want her to come out, Alison mocks them and tells them they have “no guts” for not telling Aria the truth about Eza. Aria leaves her friends in the warehouse and tries to walk to Ezra. Toby is standing outside waiting for them, he has knocked Ezra out, he says they have “no time,” and they all pile in Toby’s car and drive off, leaving Ezra passed out on the ground.

On the way home Toby, Hanna, Emily, and Aria pressure Spencer to “figure this out, no matter who gets hurt.”

Spencer wakes up, and it appears to have all been a dream. The black and white movie is still playing on the TV. She picks up Alison’s diary off the kitchen counter, she just realized something.

She rushes to Emily and Hanna, and shows them that the diary has been changed. “A” left the book for them to find, and changed a bunch of names in it so that they wouldn’t be able to decipher it. They rush to Aria’s house to tell her about Ezra, but when they look in the window they realize that Ezra is inside with her.