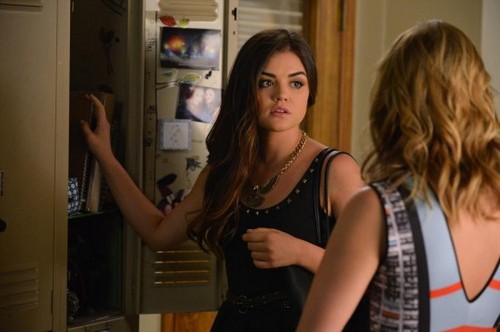 Tonight on the ABC Family PRETTY LITTLE LIARS continues with the 18th episode called, “Hot For Teacher.” On tonight’s show Emily looks to make amends with Alison through Shana, and all of Aria’s lies start to take a toll on her.  Did you watch the last episode?  We did and we recapped it here for you.

On last week’s episode episode Hanna’s new interest in crime novels helps her to come up with a plan to try and figure out whose body is in Ali’s grave. While Hanna is on her hunt, Spencer is working overtime to decipher the stories in Ali’s diary which she hopes will reveal the identity of Ali’s mystery man. But with both girls hot on the trail, will their work lead them straight into “A’s” path?  Meanwhile, Aria is upset with the new friend Mike has made and Emily’s dad is concerned about her behavior.

On tonight’s episode With Spencer’s possible Board Shorts revelation, she is now more determined than ever to prove her theory before bringing it to the other girls’ attention – especially since it could have a devastating effect on one of the Liars. But with many sleepless nights fueled by prescription medication, Hanna starts to notice Spencer’s odd behavior. Will Detective Hanna be able to figure out Spencer’s secret before Spencer is ready to share?  Meanwhile, Emily looks to make amends with Alison through Shana, and all of Aria’s lies start to take a toll on her.

Pretty Little Liars Season 4 Episode 18 “Hot For Teacher” opens with Alison DiLaurentis in a phone booth, she is on the phone with Shana, telling her that she “needs something” and asking Shana to bring it to her.

Shana hangs up, she is at The Brew, and Emily, Hanna, Spencer, and Aria walk in. Emily hasn’t spoken to Shana since she dropped Emily off at her secret meeting with Shana. Shana leaves and the liars sit down for coffee. Hanna and Aria think that Shana was the “A” that tried to attack Emily at the school after hours. Spencer doesn’t look too good, and she can’t stop twitching, Hanna thinks she has had too much caffeine. Hanna wants everyone to stop looking for clues about “A,” she is still scared about the note she found in her tooth.

Spencer heads home and pops more pills, then stays up all night researching Ezra and the remaining pages of Alison’s diary. She realizes it is time for her to go to school, but she hasn’t been to bed yet. She texts Andrew to see if he has any more pills and he is all out. So, she calls her doctor and pretends to be her mother.

Aria heads to school early to see Ezra. He reveals that someone broke into his cabin, and he has to go up there this weekend. He wants Aria to go with him, but her Dad will be out of town and she is supposed to stay with Mike. Ezra won’t take “no” for an answer though.

Hanna is at the police station picking up boxes of evidence from Holbrooke that the police had seized from her house. Holbrooke reveals he is “up to his holsters in all things CeCe Drake.” He even slips up and says that the CeCe Drake sighting was a fake.

Emily approaches Shana, she wants another chance to meet up with Alison. Shana reminds her that she already had a chance, and she blew it. Emily tells Shana to tell Alison that she is sorry.

Hanna confides in Aria that she is concerned about Spencer, because she has been so jittery and drinking herbal tea instead of espressos. Hanna slipped up and called Detective Holbrooke by his first name Gabe, and Aria thinks that Hanna and Holbrooke are more than friends. Hanna wants Aria to help her “keep an eye” on Spencer this weekend, but Aria lies and says she is going to visit her Dad, but she is really going to the cabin with Ezra.

Spencer approaches a girl named Brenda at school. She tells Brenda that her Dad is going out of town and has her prescription in her pocket. Brenda agrees to give her some pills, and charges her $50.00. Ezra corners Spencer after her shady drug deal, and wants to know why she plagiarized part of her assignment from Wikipedia. He tells Spencer that “Sloppy work leads to consequences and he would hate to see her suffer,” Spencer rushes off.

Aria pays the new counselor Jesse a visit, she wants to talk, not about her brother Mike, but about her own problems.

Hanna and Emily stop at Spencer’s house, but she lies and says she isn’t home. They know she is lying though because her car is in the driveway. Spencer is too preoccupied searching online to see if Ezra has an address in Ravenswood, where they found the latest “A Lair.”

Aria is confessing to Jesse that she is back together with her old boyfriend, and she feels guilty about lying to them about it. She rushes out of the counselor’s office, and Ezra watches her leave, he doesn’t look happy that she is talking to the school counselor.

Hanna and Emily are sitting in the car staking out Spencer’s house. They don’t see any sign of Spencer, but they see Shana coming out of the DiLaurentis house. Emily wants Hanna to follow her, she thinks Shana is up to something. Hanna refuses to follow her though, she wants her friends to stop searching for clues about “A.”

Ezra is still at school, he is going through Spencer’s file. Ironically there is a doctor’s note on file for Spencer saying she has a prescription for ADHD, it was most likely just added when Spencer called the Doctor’s office pretending to be her mother.

Shana arrives on Emily’s doorstep, and tells Emily she “needs her help.” Shana is paranoid and thinks she is being followed, and she is right, someone is sitting outside in a car taking photos of her talking to Emily. Emily invites her inside. They head up to her bedroom. Emily asks Shana if she dated Paige to get to her. Shana says she honestly had no idea Paige was dating Emily when she met her at camp, she found out when she moved to Ravenswood. Emily wants to know why she was at Wren’s apartment shipping boxes, Shana says she was just replying to an ad he posted online. Shana says Mrs. DiLaurentis has no idea Alison was alive, she was at Alison’s house trying to get something from her, she never got a chance to. She wants Emily to go in the house and get it, it is hidden behind her French poster in her room.

Spencer is still investigating Ezra’s address in Ravenswood. She calls Aria and leaves her a voicemail, she says she has to tell Aria something but it is going to “break her heart.”

Meanwhile Aria and Ezra are in the cabin in the woods. Aria had trouble sleeping the night before, and she wants Ezra to take her home. She tells Ezra she is “tired of lying to her family and her friends.” Ezra doesn’t want to take her home though. Ezra thinks it is a good thing that she is growing apart from her friends, because that means they are growing closer. He wants Aria to start thinking of him as being the “closest person to him.” Aria caves and agrees to stay at the cabin with him, and not go home.

Hanna is walking down the street and runs in to Spencer, she wants to know why Spencer is avoiding her and lying about where she has been. Hanna pressures her about why she is lying, and Spencer snaps on her and yells at her on the street. Holbrooke witnessed the whole altercation.

Emily is in Alison’s old bedroom in the DiLaurentis house. She pulls the French picture off the wall and finds an envelope taped to the back with several hundred dollar bills in it. She stuffs it in her back pocket and rushes out of the house.

Aria and Ezra are still at the cabin, he is making some weird vegan food, but he forgot chick peas. Aria volunteers to go to the nearest store to get some, and he hands over the car keys. After she leaves he takes a can of chick peas out of the cupboard and heads downstairs through his secret trap door. He has a huge computer system set up downstairs, and someone has emailed him a file full of pictures of Emily, Hanna, Spencer, Holbrooke, and Shana. Whoever was taking pictures of Shana and Emily is working for Ezra.

Emily is working at The Brew, and Shana calls her. Shana is coming to pick up the $5,000.00 Emily took from Alison’s house. Emily has hidden the money in a coffee ground bag under the counter.

Hanna is still trying to track down Spencer, she calls Spencer’s Mom and says she is going to stop by their house.

Shana is leaving her swim meet, she climbs in her car, and then screams. It sounds like someone was waiting in her car for her.

Spencer isn’t home, but Mrs. Hastings lets her in. She gets on Spencer’s laptop and looks up her history to see what Spencer has been up to. She realizes Spencer is trying to prove Ezra was in Ravenswood. She tracks Spencer down at Ezra’s apartment, and catches her sneaking inside. Hanna thinks she is wrong, but agrees to do upstairs with Spencer. Spencer is trying to open Ezra’s door to his apartment, when she realizes there is a camera in the vent and they are being watched. She puts the key back under the mat and her and Hanna leave.

Aria wakes up in the cabin and Ezra is nowhere to be found. (He is outside in his car watching Hanna and Spencer on camera.) He sneaks back into the cabin and scares Aria while she is looking for him. Aria says that he was just up locking the back door.

Spencer, Hanna, and Emily are trying to put together the pieces….