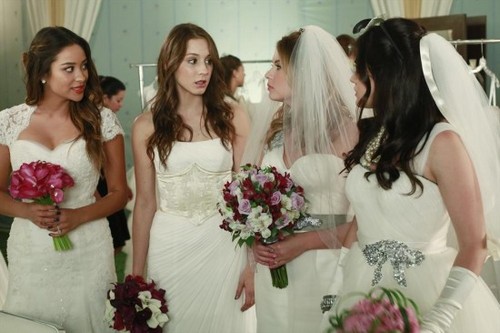 Tonight on the ABC Family PRETTY LITTLE LIARS continues with the 23rd episode called, “Unbridled.” On tonight’s episode the girls take part in a bridal fashion show for charity in order to get closer to Ali’s mom, who they suspect may be hiding some secrets.  Did you watch the last episode?  We did and we recapped it here for you.

On last week’s episode Emily took up the sleuthing reins as she searched for answers about Ezra and Mona. After confronting both, Emily tried to make sense of the heartbreaking situation. Hanna, on the other hand, began a new search after being confronted by Det. Holbrook and Lt. Tanner with a possible new lead in Alison’s case.  Meanwhile, Spencer and Aria leaned on new men in their lives to recover.

On tonight’s episode With disturbing questions surrounding Mrs. DiLaurentis, the four girls will participate in a charity bridal fashion show to try and get answers.  It is a rough time for all of the Liars as Spencer is reeling about the memories from her lost summer, Aria is still nursing a broken heart, Emily is reeling from Paige’s  Betrayal and Hanna unsuccessfully attempts to wade back into the dating pool. But as each girl tries to deal with her individual issues, they must focus their attention on their suspicions surrounding Mrs. DiLaurentis. Assuming that Mrs. D knows more about Ali and the night she went missing, girls decide to help out at her charity bridal fashion show to gain access to the DiLaurentis house to search for answers. Meanwhile, Ella and Jason return to Rosewood, each with something to hide.

Pretty Little Liars Season 4 Episode 23 “Unbridled” opens with Hanna, Emily, Aria, and Spencer at The Brew, trying to piece together the mysterious note that was in the police car. The liars are determined that Paige left the note, but Emily hasn’t confronted her. Spencer is stressed, she is afraid that she is going to go to jail for almost killing Alison with a shovel. Emily and Aria are still skeptical about Mrs. DiLaurentis being “A,” Emily doesn’t think they should trust anything Ezra says.

Spencer and Emily head out of The Brew and see Jason DiLaurentis climbing into a car. They call out to him and he looks at them and then jumps into his car and peels off. Emily and Spencer try to jump in their car and follow him, but the ignition is stuck. They find a roll of pictures with a girl with blond hair, with her face marked out, and it says “You know me, You killed me.”

At home Aria on the phone with her Mom Ella. Ella is not happy about the hotel room bill she received for all of the liquor she and her rebound guy drank at the college tour. Ella wants to know if it has to do with Ezra resigning, and then she surprises Aria and walks into her bedroom. Apparently she has returned from Europe to surprise Aria.

Spencer is trying to leave her house so she can talk to Jason, but her sober friend Dean won’t let her leave without a urine sample.

Hanna is trying to eat breakfast but her kitchen is a disaster zone, her Mom is helping Mrs. DiLaurentis plan her wedding charity show. Hanna warns her Mom that she shouldn’t trust Alison’s Mom.

Emily runs into Paige in the school bathroom and confronts her about telling the police Alison is alive. Paige insists she didn’t do it for revenge on Alison, she did it to protect Emily. Emily isn’t buying it. She curses Paige out and storms out of the bathroom.

Hanna runs into Travis in the hallway. He doesn’t have much to say to her though, he is obviously still annoyed about their disaster date. Hanna asks him for a do-over date, but he declines and says he is busy.

Mrs. DiLaurentis is on the phone with her caterer arguing with him about finger foods. A Rosewood cop pulls up to her house and she sends Ashley Marin upstairs for place cards and runs outside to talk to the cops. Holbrooke asks if he can come in, and Jessica won’t let him. He informs her that the body in the grave is not Alison’s and he has a judge’s order to exume the body. Mrs. DiLaurentis tells Holrbooke to let her daughter rest in peace.

Ashley Marin is snooping around Alison’s old bedroom. She finds a bag of teen girl’s clothes on the floor by her bed. She looks at the receipt and realizes that the clothes were bought yesterday. Mrs. DiLaurentis catches her snooping and is not happy.

Emily runs into Jason DiLaurentis and asks him why he drove off last night and wouldn’t talk to them he says he “was in a rush.” He reveals to Emily that he thinks Wilden is the one that tried to kill them in the elevator. He says that his Mom was there for him during his second trip to rehab, and he wants to be there for her now. She has “a lot going on.” He reveals that Mrs. DiLaurentis thought that Spencer was the one that was harassing Ali before she disappeared.

Spencer is at home and receives a text from Emily warning her that Mrs. DiLaurentis definitely has it out for her. Dean wants to know why Spencer is sleeping downstairs and why she is so jumpy. Spencer reveals to Dean that she is stressed because her parents won’t fill in the holes in her memory from the summer Ali went missing.

Aria is annoyed because her Mom took a phone call from her boyfriend Zack. She thinks that her Mom cares more about her boyfriend than she does Aria and Mike. Ella tries to point out that Aria is mad at Ezra, not her, but Aria doesn’t want to hear it.

Veronica Hastings comes home in the middle of the night and finds Dean and Spencer passed out on the couch together. She reminds him of his job description and says she never should have hired him, and kicks him out.

Spencer, Aria, and Emily head to The Brew the next day to discuss what Jason told Emily. Hanna barges in late, and announces that they are going to put on wedding dresses and volunteer at the charity fundraiser at the DiLaurentis house. She fills them in on the mysterious bag of clothes her Mom found in Alison’s room. Holbrooke approaches them and asks them if they have any thoughts about who the dead girl is in Ali’s grave…the girls are speechless.

Spencer goes home and finds her Mom rummaging through her room. Spencer demands to know what happened the summer Ali went missing. Veronica confesses she was on heroin that summer, and she never knew whether it was going to be Spencer coming down the stairs or her evil drug addict twin. Veronica confesses that one night she was picking up Spencer’s stuff that she had thrown out of the house after a fight with Melissa. Alison showed up and offered to help her Mom pick up, but Veronica told her to go home. Alison told her Mom she was afraid Spencer was going to “turn on her” and then two days later Alison went missing. Spencer is in shock, she doesn’t remember any of it.

Hanna arrives at the charity wedding fashion show at the DiLaurentis house, and finds out that Travis is one of the car pool attendants working the event. Emily, Spencer, Hanna, and Aria head upstairs and get decked out in wedding dresses and veils for the fashion show. Spencer realizes she forgot her veil and heads back into the DiLaurentis house. She runs into Jason and tells him that she has no intention of bothering his Mom, she is just helping out at the show. She asks Jason if the night that he thought he saw CeCe wearing Ali’s clothes if it is possible he was mistaken. Dean interrupts before Jason answers, and Jason sneaks off. Dean came to say good-bye and give Spencer his phone number. Spencer reveals that Jason was at Clark Center Rehab, and Dean tells her that is impossible, that rehab has been closed for two years.

Spencer rushes back to Emily, Aria, and Hanna, and tells them that Jason lied, he hasn’t been in rehab. They think Jason may have been helping Mrs. DiLaurentis be “A” the entire time. Hanna sneaks off to try and get into Alison’s room to see if there is an address with the bag of clothes she bought for Alison.

Spencer steps out of the fashion show and sees Mrs. DiLaurentis sneak into the woods and hand somebody what looks like a suitcase. Spencer rushes into the woods to try and find out who she was handing the bag to.

Meanwhile Hanna is outside enlisting Travis as her decoy. She wants him to stall Mrs. DiLaurentis while she sneaks into Alison’s room. Travis has the other valet worker drive into the mail box to create a decoy, and then kisses Hanna.

Ella heads backstage to try to talk to Aria after their fight. Ella has a heart to heart with Aria and assures her that soon her break-up with Ezra won’t hurt anymore. Then, Ella reveals that her boyfriend Zack proposed to her.

Hanna and Emily are crawling around under Alison’s bed in their wedding gowns looking for the shopping bag her Mom described. Emily and Hanna do find a picture of a restaurant in the closet and realize it is the password to Alison’s email. They send an email to her and tell her to call them ASAP…and wait.

Meanwhile Spencer is running through the woods in her wedding dress chasing the person that Mrs. DiLaurentis handed a bag to. She thinks it is Alison. Spencer’s wedding dress qets caught in an animal trap, she pulls her veil out and runs away.

Emily, Hanna, and Aria receive a phone call from Alison. She says her Mom doesn’t know she is alive, and not to tell her. They warn Alison that the police know she isn’t dead. Alison tells them to come meet her…and hurry.

Spencer rushes in, covered in dirt, and says..that she was in the woods.  Spencer takes off her corset and they realize the back of it is covered in someone’s finger bones, and a note that says, “What will you do when the rest of me comes out of my grave?”
Paige shows up on Emily’s front porch and Emily dumps her because she can’t trust her anymore.

Emily, Hanna, Aria, and Spencer hit the road and head to Philadelphia, they arrive at an abandoned building where Alison told them to meet her.  A door opens and they all spin around, and Spencer says, “What are YOU doing here?!”