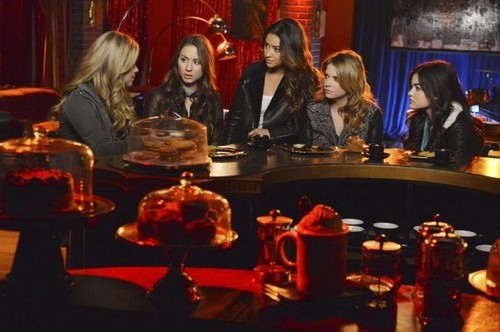 Pretty Little Liars returns to ABC Family tonight for its’ season finale. After years of questions and mystery surrounding the night Alison DiLaurentis disappeared, her four best friends come face to face with Ali and finally learn what really happened to her that September night. Now with their newfound knowledge of Ali’s long-held secrets, can Aria, Emily, Hanna and Spencer help Alison finally figure out who “A” is?  Aria, Emily, Hanna and Spencer finally get all of the answers about what happened to Ali the night she disappeared

Last week it was a rough time for all of the Liars as Spencer was reeling about the memories from her lost summer, Aria was still nursing a broken heart, Emily was reeling from Paige’s Betrayal and Hanna unsuccessfully attempts to wade back into the dating pool. But as each girl tried to deal with her individual issues, they must focus their attention on their suspicions surrounding Mrs. DiLaurentis.

Assuming that Mrs. D knows more about Ali and the night she went missing, girls decided to help out at her charity bridal fashion show to gain access to the DiLaurentis house to search for answers. Meanwhile, Ella and Jason returned to Rosewood, each with something to hide.  Did you catch the last episode? If not we have a recap of it for you right here!

The season finale of PRETTY LITTLE LIARS is going to be really exciting and we’ll be recapping it for you right here. In the meantime hit up the comments and tell us who you think is really A!

Tonight’s episode of Pretty Little Liars opens with Alison meeting up with Spencer, Aria, Emily, and Hanna. They reveal that they think Ali’s Mom is “Head A.” The girls all sit down and Alison tells them she is going to tell them everything that happened form the night she went missing and if they can’t figure out who “A” is then she is going to have to disappear again…for good.

Meanwhile the police have Cece Drake in custody, and Holbrooke is in an interrogation room questioning her. Cece starts off by telling Holbrooke that “Wilden was a jerk,” and IF she did kill Wilden then she had a good reason. Cece reveals to Holbrooke that Alison is alive and she knows who is in Alison’s grave, she wants to strike a deal.

Alison starts off by telling the girls that “A” had been tormenting her since Halloween. She went to Hilton Head with Ian for the weekend to get away. Melissa arrived at the Ian’s, freaking out because she knew he was with Alison. While Melissa and Ian were arguing Alison went through Ian’s laptop and found a video of Jenna and Toby on his laptop. She saved the video to a flashdrive and went and visited Jenna in Rosewood, she thought Jenna was “A” and that the video would shut her up.

Holbrooke heads over to the Hastings house with a search warrant, and begins going through Spencer’s room. Cece gave him photos of Alison talking to the liars after Ravenswood, so Holbrooke has warrants to search all of their houses. But, none of the liars’ Moms have any idea where they are. While Holbrooke is searching the house Melissa arrives with a suitcase, and says “surprise” to her Mom.

Alison went home after visiting Jenna, “A” left a note on her mirror “I’m everywhere and soon you’ll be nowhere.” Alison got ready to leave, and her Mom told her she couldn’t go out. She was busy on the phone with someone and Alison stole her sedative pills out of her purse and left to meet the liars in Spencer’s barn. She drugged Emily, Spencer, Aria, and Hanna. Once they were passed out, she snuck out of the barn to meet Toby.

Alison takes the liars downstairs to a diner where she apparently works and house sits for the owner. Alison tells them that Toby met up with her to thank her for exposing what happened between him and Jenna, and he told her that going to juvie was the best thing that ever happened to him. After Toby left, Ezra pulled up. Alison climbed in the car and asked him what he was doing there, and he was furious wit her. He told her “you’re not going anywhere, you lied to me.”

Holbrooke sits down and questions Veronica Hastings, she isn’t very cooperative though. She says she wants to call her husband, but her cell phone has no signal in the interrogation room. An officer tells Holbrooke they have warrants to track the GPS on the liars’ phones and they will have their location within an hour.

Holbooke heads into a different interrogation room where he has Peter Hastings for questioning. He lies and says his wife is on her way, but she really is in the room next door.

Noel Kahn arrives at the diner, and tells Alison they have cash, passports, and plane tickets ready and they have to leave within an hour.

Alison gets back to her story about the night she went missing, he was furious because he realized she was not 21. He is scared for her that she is going to get herself hurt running around and pretending she is someone she isn’t. Alison climbs out of the car and Ezra peels off, saying he would never see her again.

Alison heads to the Kissing Rock and meets Ian. Alison tells Ian he is going to jail, and she saw his home movies. Alison tells Ian if he or his crazy girlfriend Melissa are the ones sending her notes, and they don’t stop, she will show the videos to the cops. Ian ran off, freaked out, and told Alison if she shows anyone the videos then her own family will be in trouble.

Alison says after she met with Ian she went back to the barn, and Spencer was awake, and looked crazy. She told Alison she had been “waiting for her.”

Holbrooke is still asking Peter questions, he wants to know why he hired a private investigator to follow Spencer the summer that Alison went missing. Peter says he isn’t answering any more questions until he talks to his lawyer. He heads out in the lobby, and finds Jessica DiLaurentis standing there. He asks her if they still have “an understanding.” Jessica storms off, and Melissa sits down with her Dad. Peter starts crying and says “he did everything he could to cover Spencer’s tracks.”

Alison continues her story, Spencer chased her out of the barn and picked the shovel up. When she tried to hit Alison, she dropped a pill bottle and tripped. Alison realized that Spencer had a drug problem. She gave Spencer the pills back and told her to “go sleep it off” and promised Spencer she wouldn’t tell her parents. Spencer walked off with the shovel and Alison left to meet Aria’s Dad Byron. She realized Byron wasn’t the one sending her “A” messages either. She went back to the barn and waited and didn’t get another text message, and she didn’t. She thought she had handled her “A” problem. She went back home and saw her Mom standing in the window watching her walk up to the house. Then, someone snuck up behind Alison and hit her over the head with a rock while her Mom watched.

Jessica DiLaurentis watched someone murder her daughter and then proceeded to bury her. Alison’s own Mom buried her alive because she thought she was dead. Ali could hear her Mom talking to someone and saying “what did you do” while she was burying her. Mrs. Grunwald pulled Ali out of the grave, and she ran away at the hospital, like Mrs. Grunwald said in the Halloween episode. While Alison was walking down the road, Nerdy Mona found her and picked her up. Alison confessed to her that “A” tried to kill her, and Mona checked her into the Lost Woods Resort. The next day Mona brought Alison a wig and a disguise, and Alison thanked her for saving her life. Alison decided to “stay dead,” and let whoever tried to kill her think that they had killed her.

Meanwhile at the police station Melissa tells her Dad that Spencer didn’t kill that girl, and then whispers something in his ear. Peter looks shocked.

Meanwhile the police have located the liars by their cell phone signals. Holbrooke tells Mrs. Hastings that the Philadelphia police are about to pick them up.

Alison confesses to the girls that she pushed Ian off the belltower to save Spencer, and he wasn’t dead. The liars hear a noise. Someone in a black mask breaks through the window of the diner, they run through the building and wind up on the roof, Ezra appears at the same time the person in the mask appears. He tells the person in the mask that the police are on their way and tries to wrestle “A” to the ground, the gun fires several times. Hanna picks up the gun and tells “A” to take off their mask, instead “A” jumps off the roof and runs away.

The liars and Alison turn around and realize Ezra has been shot in the stomach. He drops to the ground. The girls scream for help.

The episode ends with a scene of someone burying Mrs. DiLaurentis in a grave similar to the one Alison was buried in.