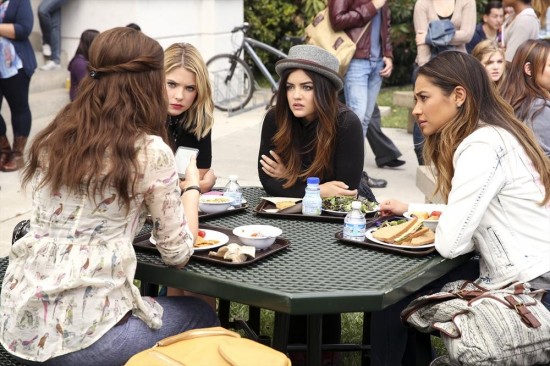 Pretty Little Liars returns to ABC Family tonight for the fourth episode of season five. Tonight’s episode is called “Thrown From the Ride.” On tonight’s episode Ali wants to reclaim her leadership role in the gang, but the other girls aren’t too keen on this. Meanwhile, students at Rosewood High await Ali’s return; and as Aria sinks deeper into her depression, she finds comfort from someone unexpected.

On the last episode, now being forced to live through Ali’s latest lie, Aria, Emily, Hanna and Spencer tried to cover their tracks, while simultaneously trying to piece together what happened in New York. Hanna and Aria had to close loose ends with the two people who knew the truth about Ali’s story – Mona and Ezra. Spencer and Emily tried to find out the truth about Jason and his whereabouts the night they were in New York. Did you watch the last episode? If you missed it we have a full and detailed recap, right here for your enjoyment.

On tonight’s episode with Ali now back in Rosewood, she attempts to regain the role of leader of the group, but she finds her four friends are not as willing to blindly follow her every whim as they once were. Besides feeling the pressure from Alison, Aria, Emily, Hanna and Spencer are also feeling under the microscope at school with the high school focusing their attention on the Liars. While most kids are morbidly curious about what happened to Ali, some are more focused on planning for Ali’s return to school.

The fourth episode of season five’s PRETTY LITTLE LIARS is going to be really exciting and we’ll be recapping it for you right here. In the meantime hit up the comments and tell us who you think is really A!

Tonight’s episode of Pretty Little Liars kicks off with Hanna and Aria going through books at school. Aria finds a copy of The Scarlet Letter which belonged to Shanna. She begins analyzing the quotes that Shanna underlined. Mona approaches them and jokes that Shanna won’t need the book anymore…since she transferred to a different school.

At the DiLaurentis house, Alison is going through her clothes and preparing to send a box to goodwill. She says she isn’t the same person she was two week ago, and she is ready for a change. She tells her Dad she needs some school supplies, he says that he doesn’t think she should go back to Rosewood High, he wants her to move with her. She pleads with him not to take her away from Rosewood.

Spencer takes her Mom aside, and says that Melissa and her Dad are hiding something from them. Her Mom is in denial and says the only thing Melissa is hiding is getting back together with Wren. Her Dad comes downstairs and interrupts their conversation, he says the police will be done with the crime scene by tomorrow.

Lucas and Mona are arguing in a dark room, Lucas is having second thoughts about their scheme to take down Alison. He feels guilty since Alison was kidnapped and locked in a basement, he doesn’t think she should be tormented anymore. Mona argues that Alison made up the entire story and she wasn’t kidnapped.

Spencer, Aria, Emily, and Hanna try to eat lunch outside. Aria is having a paranoia meltdown, she is convinced that Mona knows she killed Shanna. Alison sends them all a text saying that the police are still investigating their murder and they still don’t know what the cause of death is.

Andrew stops by Spencer’s locker to see how she is “holding up.” She invites him to come over to her house tomorrow and help her family replant their backyard from where Alison’s Mom was buried.

Aria googles Shanna’s name and finds a video of her funeral online. She watches it and cries, and then hallucinates and sees Shanna sitting up in the casket and looking at her. The guilt is eating her up inside.
Emily heads into the locker room looking for Sidney so she can help her train and she has an awkward run-in with Paige. Sidney and Emily invite Paige to go run sprints with them on the track.

Spencer and Andrew are busy landscaping, Andrew jokes that they should take a break and make out, but Spencer says she is still with Toby. While they are in the Hastings’ shed they find a bucket of rat poisoning, it has a receipt taped to it, and it was bought just last week. Spencer is confused because they have never had a rat problem.

Hanna agrees to go with Alison’s to the doctor’s for her check up after her alleged kidnapping. Meanwhile Aria, Emily, and Spencer argue over which one of them is avoiding Alison more. Aria asks Emily how she dealt with killing Nate, and if she was obsessed with him afterwards. Emily admits that she was just as obsessed as Aria is now over Shanna. At the doctor’s office, the doctor finds a huge scar on Alison. She says she cut her leg on a rock when she was jumping out of the car a month ago, he knows she is lying and says the scar is much older and looks like it came from a knife.

Spencer finds her mom sitting in the living-room. She pleads with her again to tell her what is going on. Mrs. Hastings confesses that a couple days after Alison went missing, Jessica came to their house and swore that Spencer had something to do with it. But, Mr. Hastings blackmailed Jessica and told her if she went to the police he would tell Mr. DiLaurentis about the affair.

After the doctor leaves the room Alison pulls out a recording device, and gives it to Hanna. She recorded her entire conversation with the doctor and she wants Hanna and the rest of the girls to memorize it so that all of their stories match up. Hanna asks her about the scar on her leg, and she tells Hanna she doesn’t want to know. Ali says, “once you know something, you can’t un-know it.”

Spencer is upstairs googling the rat poison she found in her family’s shed. Which, it turns out is fatal to humans. She receives a text from Alison telling her to call her back ASAP.

Mona corners Paige and Paige tells her she is not helping her torment Alison. Mona reminds her that if she is not with her, then she is against her. Spencer finally stops avoiding Alison and heads over to her house. Alison reveals that someone messed with her prescription, they gave her medicine to lower her blood-pressure, even though she already had low blood pressure, and it stopped her heart.

Aria arrives at Ezra’s house, and reveals that she is having a melt-down and has been watching her funeral online over and over. Ezra tells her that she needs to learn to forgive herself.

Hanna is at the mall trying on new clothes in the dressing room. Spencer calls her and asks her about the recording she is supposed to memorize, she doesn’t get why Alison didn’t tell her anything about it since she was just at her house. She tells Spencer she is sick of being the messenger and hangs up, and then she shoplifts the shirt she is trying on.

At Spencer’s house she is cleaning up the dishes from having dinner with Andrew. She accidentally cuts her hand on a knife and opens the cupboard to find a band-aid, instead she finds a pill bottle with her Dad’s name on it for high-blood pressure, the same kind of pills that killed Alison’s Mom.

At Ezra’s house, Aria asks him if she can sleep on his couch because she doesn’t want to be home alone. Aria gives her an old t-shirt to sleep in, and she changes her mind and says she is just going to go home. She thanks him and rushes out of his apartment.

Emily heads over to Alison’s and she shows her the backpack her Dad got her to go back to school with. Emily tries to tell her it might not be such a good idea to return to Rosewood High. Ali reassures her that they will be fine if they stick together.

Aria heads over to Spencer’s house. Spencer confesses to Aria that she thinks her Dad killed Mrs. DiLaurentis. Mr. Hastings returns home and says that he dropped her Mom off at a spa to “calm her nerves” and she won’t be home for a few days. He says that the police came by to finish what they were doing in the backyard and Mrs. Hastings snapped, so he convinced them to not press charges and took her to a spa to calm down.