Pretty Little Liars Season 5 Summer Finale Recap: Who Died, Who is Arrested – “Taking This One To The Grave” 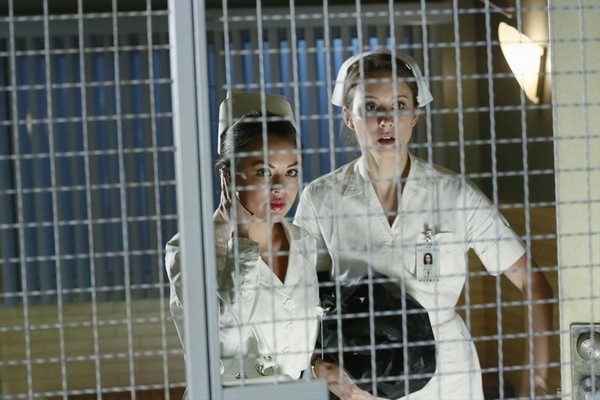 Pretty Little Liars returns to ABC Family tonight for the fifth season finale, can you believe another season is already ended?  On tonight’s season finale called, “Taking This One To The Grave,” Alison looks for new allies after the girls turn on her, and the girls seek help from Mona since “A” won’t allow them to contact the police.

On the last episode, Melissa finally told Spencer what she knew regarding the night Ali disappeared. But what is Spencer supposed to do with the knowledge? Knowing something is off about Alison’s story, Emily was on the hunt for answers on her own. She enlists Ezra’s help in finding out more about Cyrus and his past connection to Alison.  Meanwhile, Hanna asked Spencer and Toby for help with Caleb’s drinking problem.  Spencer received a shocking video from Melissa after she left town, confessing that she was the one who buried Bethany Young alive.  Did you watch last week’s episode?  If you missed it we have a full and detailed recap, right here for you.

On tonight’s episode with Alison leading them down a dangerous path and “A” barring them from telling the police the truth, Aria, Emily, Hanna and Spencer feel trapped and are desperate to find a way out of this mess. With nothing else to lose, could the PLLs lose everything by putting their faith in a possibly untrustworthy ally?  Meanwhile, Alison begins to build up her own army now that the PLLs have turned their back on her.

The eleventh episode of season five’s PRETTY LITTLE LIARS is going to be really exciting and we’ll be recapping it for you right here.

Tonight’s Pretty Little Liars season finale begins with Ezra, Aria, Hanna, and Emily standing at a crime scene crying. Aria says, “You saw all the blood in there, there’s no way anyone could have lived through that.” They receive a text message from “A”, it says “It’s all your fault.”

36 hours earlier Alison is at the police station preparing to take a lie detector test. The cop straps her in and begins asking her questions. He asks her to state her full name and she replies, “Alison Lauren DiLaurentis.”

Mona is laying in her bed listening to opera on a record player, her Mom knocks on her bedroom door and tells her she has company. Mona heads downstairs and finds Spencer, Aria, Hanna, and Emily waiting for her. They tell her that they need Mona’s help, Alison is at the police station right now and they are scared that she is going to tell on them. They want Mona to help them find out what Alison is telling the police.

Mona doesn’t want to help the liars, she is scared what Alison will do if she finds out she is helping the liars. Her mom interrupts to bring them cookies. Mona apologizes to them for “taking all of her Ali-anger out on them” and they leave the house. As Hanna is leaving Mona’s mom stops her and asks her if Alison is starting to harass Mona again? Hanna says she doesn’t know, she’s not friends with Alison anymore. Mona runs upstairs to her bedroom and calls someone, she says “Send out a Code A, she’s planning something big.”

Mona arrives at The Brew for her meeting, but no one has showed up. Lucas tells her that they aren’t coming, Alison got to them all. They think that Alison is a saint, and Mona is crazy. Mona says Alison has gone “full on socio.”

The next morning Mona meets the liars in the bathroom, she reveals that Alison took a polygraph at the police station last night. Mona thinks that Alison is “A” and now she is “ending the game,” which is why she went to the police. She probably wants to pin everything on the liars before she dumps them for good. Mona says she will find out what Alison told the police, as long as the liars don’t tell anyone she is helping them.

Emily runs in to Paige in the hallway, she asks her what she was all dressed up for last night, but Paige said it was just a costume thing and she didn’t really have fun. Emily says they never had their talk, but Paige says she is tired of talking and kisses Em. Mona runs in to Alison in the hallway and Alison creepily smiles at her, and then is called in to the principal’s office over the loudspeaker.

Aria and Ezra make pumpkin pies in his apartment. He is coming to the Montgomery family Thanksgiving dinner, and Ella put him in charge of making pies. He’s nervous that her family is going to judge him. Aria reassures him it is all going to be fine.

Toby surprises Spencer in his police officer uniform, he says the ceremony starts at 8:00. And, she promises she will be on time to his graduation. She gives him a graduation gift, it’s a pocket watch an inscription in it. It says “You are my once upon a time.”

Lucas shows up at the Rosewood police station and says he wants to apply for the high-school liason program. While the cop is getting him his application, he plugs something in to his computer. Mona is sitting in the bathroom at the police station with her laptop, and uses the device Lucas plugged in to the computer to hack in to their computer system, she downloads all of their files.

Emily is decking her house out in Christmas decorations, even though it’s not even Thanksgiving yet. Paige is up on the roof helping her set up her huge snowmen. Hanna and Caleb are trying to untangle the Christmas tree lights. Hanna gets a phone call from Mona, and lies and tells Caleb it is her mom. She lies and says her mom needs cranberries, and Caleb calls her out and asks her what she is lying about.

Mona, Spencer, Emily, Hanna, and Aria all meet up at Spencer’s house to listen to the recordings of Alison’s lie detector test, Mona downloaded it on to her laptop. In the recording the cops asks Alison questions about where Spencer was the night she was attacked. Then she informs the cop that she had nothing to do with Bethany Young’s murder.

The liars are a little confused about why the cops were asking so much about Spencer, and are surprised that Alison doesn’t say anything that incriminating. Caleb barges in and says he was able to download more files, apparently Mona asked him for his help since he is a computer whiz. He says the cops were granted access to Bethany Young’s Radley files, and Alison DiLaurentis is off the hook for the murder. They issued an affidavit for an arrest warrant because they think that Spencer killed Bethany to “score points” with Alison. Spencer freaks out, and says she is about to be arrested. They need to know why the police think Alison wanted Bethany Young dead. Spencer announces they need to go back to Radley and find out what the police found out about Bethany.

Spencer and Mona head in to Radley dressed as nurses while Hanna and Caleb are sitting outside manning the phones and computer. Emily is getting ready to leave her house and Alison shows up. Hanna texts Emily and Emily informs her that Alison is with her and she is keeping her busy. Emily tells Alison that she wants to make amends.

Meanwhile, Aria is also in Radley volunteering at her art class, She dropps a glass jar of paint and distract the nurse at the nurse’s station so that Mona and Spencer can steal the front desk’s keys. Outside a car pulls up and Hanna and Caleb duck, they radio Mona and warn her that Detective Holbrooke just walked in to Radley.

Holbrooke pays Aria a visit in the art room, he is surprised to see her working there. He asks her when she started volunteering, whether it was before or after they found Bethany Young’s body? Aria asks if she should call her parents, Holbrooke says that won’t be necessary.

At Emily’s house Alison takes her phone and reads her text messages. She says that Hanna wants to know if she is still keeping her busy. She scoffs that she actually believed Emily was trying to make amends, and laughs that they think she is “A.” Alison storms out of the house and hops in her car where twins are sitting in the car waiting for her and one hops in the back. Paige is hiding in the bushes and sees Alison leave and jumps in her car and follows her.

Spencer and Mona are inside Radley reading through Bethany Young’s files, Mona is bragging about her college acceptance letters. They find a recording of Bethany Young, and are shocked to realize that Mrs. DiLaurentis was having an affair with Bethany’s father. And, Bethany knew Alison! They leave Radley and Spencer receives a phone call from Toby. He’s driving to his graduation and freaking out because Spencer hasn’t met up with him yet and he is going to be late. While he is talking to her on the phone, another car slams into his car.

The next day Spencer, Emily, Aria, and Hanna all meet at The Brew with Toby, his leg is broken and he is in a cast. Paige barges in and says that she followed Alison last night, with the creepy twins at their school named Cindy and Mindy. They drove out to an abandoned farm and met up with like ten different cars. Alison is building an army of her own! Detective Holbrooke barges in to The Brew and arrests Spencer for murdering Bethany Young, they drag her out in handcuffs.

Mona is in her bedroom listening to all of the recordings of Bethany Young’s sessions at Radley. Hanna texts her and tells her that the cops just arrested Spencer. Mona’s mom leave for their family Thanksgiving, and Mona promises she’ll leave in an hour, as soon as she finishes her report. Someone in a black hood is standing outside Mona’s house watching her.

Aria receives a phone call from Mona. Mona tells her that Alison lured Bethany to Rosewood, and she was jealous and knew about her mom’s affair, she wanted Bethany did. Mona says, “Alison is “A” and I can prove it.” Aria tells Ezra to get his coat and they rush over to Mona’s house. Meanwhile, someone in a black hoodie with long blond hair in Mona’s bedroom. Aria, Hanna, Emily, and Ezra all rush in to Mona’s house. Her house has been ransacked and there is blood everywhere.

The cops arrive and Detective Holbrooke holds a press conference outside of Mona’s house. He says they have not located a body yet, but they are ruling this a homicide. The amount of blood they found means her wounds are fatal. Mona Vanderwaal has been murdered.

The episode ends with “A” in a black hoodie, they steal the baby Jesus from Emily’s nativity scene in her yard and throw it in the trunk of their car on top on Mona’s dead body.