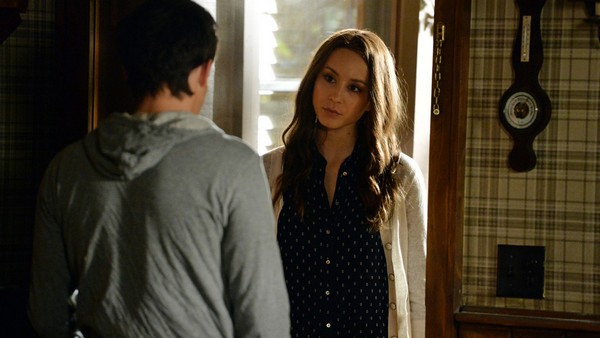 Pretty Little Liars returns to ABC Family tonight for the ninth episode of season five. Tonight’s episode is called “March of Crimes” when Hanna’s drinking escalates, and Aria suspects Hanna lied to her while she was drunk. Elsewhere, Emily looks for a connection between Alison and Noel; and Spencer uncovers something unexpected at her eye doctor’s office.

On the last episode, Hanna’s insecurities and current situation continued to plague her when Alison moved into the Marin house while her Dad was out of town. Now forced to live with the one person she was trying to avoid, Hanna retreated further into abusing alcohol and ended up in a sticky situation. Meanwhile, Aria dropped the ball on her maid of honor duties when Ella returned to town to plan her wedding and Spencer and Emily pursued a dangerous lead, trying to solve the mystery of the dead girl in Alison’s grave. Did you watch the last episode? If you missed it we have a full and detailed recap, right here for your enjoyment.

On tonight’s episode Hanna continues down her boozy path, with the help of Caleb, and her friends can no longer stand by and watch Hanna self-destruct. After her last encounter with Hanna, Aria starts to take note of Zach and wonders if Hanna – while drunk – was telling her the truth. Meanwhile, Emily tries to find information linking Alison to Noel and Spencer makes a surprising discovery at the eye doctor.

The ninth episode of season five’s PRETTY LITTLE LIARS is going to be really exciting and we’ll be recapping it for you right here. In the meantime hit up the comments and tell us who you think is really A! In the meantime, enjoy a sneak peek of tonight’s episode below.

Tonight’s episode of Pretty Little Liars begins with Spencer, Hanna, and Emily lecturing Alison. They are furious that she had Noel break in to Hanna’s house with a knife to scare her mom. Spencer accuses Alison of sneaking out at night behind their backs, Alison goes outside to call her Dad. Emily’s mom texts her and she has to go home, and Spencer lectures Hanna for drinking out of a flask. Emily heads home and overhears Alison’s phone conversation. She catches Noel Kahn playing a recording in his car of Alison and Shanna talking on the phone.

The next morning Hanna’s mom comes to her room to check on her, Alison is in the shower. Ashley invites Hanna and Alison to meet her at the mall after school, she wants them to get new outfits for Ella and Zack’s engagement party. Hanna informs her she isn’t going and Ashley doesn’t understand why. She finds a flask on Hanna’s bed and lectures her that drinking is not the answer.

Alison catches Spencer at her locker and warns her that Detective Tanner is back at school and questioning Aria. She tells Spencer not to cave, and if one of them falls they all falls. Hanna walks by and is clearly drunk again, Alison says Spencer should be following Hanna.

Emily meets with the swim coach in his office and he offers her a job as assistant coach. She sneaks back in to his office after their meeting and looks up Noel Kahn’s locker combination. She sneaks in to the locker room and steals Noel’s car keys.

Spencer pays Caleb a visit on her way to the eye doctor. She tells Caleb that he needs to lay off the booze and stop getting Hanna drunk in the middle of the day. Caleb argues that Hanna is a big girl, and Alison is what is driving her to drink. Spencer says that Caleb used to be “the best thing that happened to Hanna,” but not anymore. Caleb kicks her out and says he needs to take a shower.

Alison tries to talk to Hanna at school, but Hanna gives her a cold shoulder. Hanna scolds her that her “stupid stunts effect a lot of people.” She tells Alison that she wants to be left alone, and tells her that she should stay with one of the other girls. While they are arguing Jenna shows up and Hanna storms off. Alison says hi to her and says that she is sorry about what happened to Shanna. Alison asks Jenna how she turned Shanna against her, but Jenna says that Alison turned her against herself.

Spencer is sitting in the waiting room at the eye doctors. A nurse puts eye drops in her eyes and everything goes blurry. While she is rubbing her eyes trying to see, she sees two Jenna’s at the front desk. She runs in to an operating room and calls Emily for help, but Emily is busy stealing pictures of Alison and a tape recorder out of Noel Kahn’s car. Spencer hangs up and notices a sign on the wall, it says “Can u c me yet – A”

Aria heads home and Zack and Ella are getting ready for their engagement party. Ella says she has to go to her hair appointment and leaves Aria home alone with Zack. Aria tells Zack that Hanna isn’t feeling well and isn’t coming to the party and waits to see how he reacts.

Emily arrives at the eye doctor just in time for the two Jenna’s to come out of their appointment. Emily is shocked when she sees that the second Jenna is Sidney. She asks Sidney when she became friends with Jenna and why she didn’t tell her she was friends with her, but Jenna drags her off and tells Spencer and Emily that they should be worried about Alison, not them.

Hanna is trying to drink her beer and watch TV but Caleb is asking her why they can’t go to Ella’s party. Hanna finally admits that Zack is a sleeze, and he hit on her, and no one believes her. Caleb says that he is going to go out and get food and tells Hanna to stay there.

Ella and Aria are getting ready for the engagement party. Aria asks her if she is sure she wants to get married, and says that maybe she should wait. Aria asks Ella how well she really knows Zack, she says that she thinks Zack might have been inappropriate with Hanna. Ella confesses that there was an incident before they came back to Rosewood, but she didn’t take it seriously.

Caleb shows up at the café and Zack tells him that they are closed for a private event. Caleb accuses him of hitting on Hanna and calls him a scumbag. Zack argues that this was all a misunderstanding and he was just joking, Caleb argues that Hanna didn’t find it funny. Zack gives Caleb a note “Sorry for the misunderstanding, I’ll be less shy next time. –Hanna.” Caleb says that Hanna didn’t write that, and punches Zack in the face. Caleb returns home and ices his hand, Hanna is shocked that Caleb punched him. Caleb shows Hanna the note that Zack got from her, he thinks that “A” gave the note to Zack to cause all of the drama.

Emily heads out to her car to drive to the engagement party. Sidney pulls up and begs for a chance to explain. She says that she met Jenna three years ago in Philadelphia, and she was there when Alison visited her in the hospital and threatened her. She only came to Rosewood because Jenna was scared when Alison came back. Emily doesn’t want to hear it. She says she is taking the coaching job just so she can keep an eye on her every day. She climbs in to her car and peels off leaving Jenna standing there dumbfounded.

Spencer heads to her family’s lake house to hide the pictures and recorded Emily found in Noel’s car. The pictures and recording are evidence that debunks Alison’s entire sob story about being kidnapped and links her to Shanna’s death. When she arrives the light in the house doesn’t work, she hides the pictures in cupboard. Unbeknownst to her someone else is hiding behind the furniture and watching her.

Spencer sees movement behind the couch cover and pulls the cover off from it. It’s Noel Kahn! He demands that Spencer gives him the pictures and recording back. Noel says that it is just his insurance policy, Alison sent him to steal it from Jenna’s bedroom, and the house exploded just a few minutes after he left. He thinks Alison might have been responsible and was trying to get rid of him. Spencer hits his hand with the fire poker and tells him to get out, she says they need insurance just as badly as he does and promises that she will keep the pictures safe. Noel Kahn storms out of the cabin.

Aria pays Hanna a visit, and announces the engagement party is off. She apologizes for not believing Hanna, she just really wanted to believe that her mom could be happy with Zack. Hanna understands where she is coming from and forgives Aria.

Ashley and Alison arrive home from the engagement party and speculate about why the party was called off. While Ashley is fixing them dinner she gets a phone call from Detective Tanner. She tells Alison that they caught the guy that broke in to her house and they need to go down to the precinct.

Byron returns home and finds Ella in tears and packing her suitcase. She confesses to him that the engagement party didn’t happen because she is no longer engaged to Zack. Byron comforts her and says that Zack didn’t deserve her, and hugs her.

Alison and Hanna’s mom arrive at the police station. A man is in the interrogation room confessing to kidnapping her and repeating every single detail that she told the cops. Naturally she is confused seeing as how she made up the entire story.