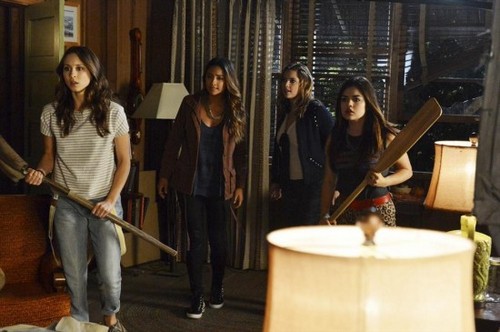 We are still reeling from last week’s episode of Pretty Little Liars, “Love ShAck Baby,” but that was nothing compared to Episode 16, “Close Encounters.” Who else thinks this is turning out to be the best season of PLL yet? The all new episode is set to air this Tuesday, January 21st on ABC Family, at 8:00 PM and we will have the live recap for you right here on CDL. Here’s what fans can expect to see on Pretty Little Liars 4.16 “Close Encounters.”

Shady Shana will return to Rosewood in Episode 4.16 “Close Encounters.” And, according to the official episode synopsis, she is a woman on a mission. Shana has come to Rosewood to summon Emily, supposedly Ali wants to meet her in private, and she wants Emily to come alone (without the other liars).

Paily Is In Trouble

It has been obvious since the premiere of Pretty Little Liars that Alison DiLaurentis was Emily’s first love. With her first love back in the picture, it is only a matter of time before it begins to strain her relationship with her current girlfriend Paige. When Shana returns and tells Emily that Alison wants to see only her, it brings up a lot of feelings Emily thought she had buried years ago. This, can’t have a good effect on her relationship with Paige.

Emily Could Be In Danger

Shana swore her loyalty to the liars’ nemesis Jenna Marshall, and was openly in love with her. She also has been linked to Mona, Wren, and Spencer’s sister Melissa, who are also all up to no good. It seems strange that Ali would trust her to carry a secret message to Rosewood, there is a chance that Shana is leading Emily straight into another one of “A’s” evil plans.

The infamous Alison DiLaurentis hasn’t made an appearance yet in Season 4B, unless you count the weird vision/dream that Emily about her in “Love ShAck Baby.” But, all that will change in Episode 4.16 “Close Encounters.” According to Executive Producer Marlene King, we will see Alison this Tuesday. Marlene King tweeted, “Next Tuesday… It ain’t no dream. Ali is back!!!!”

Matters Of The Heart

According to the official “Close Encounters” synopsis released by ABC Family, while Emily and Spencer are knee-deep in Ali drama, Hanna and Aria will be dealing with “matters of the heart.” Hanna has her hands full dealing with her recent break-up with Caleb and her recent run-in with Travis. Aria is still juggling her feelings for Ezra and Jake.

Jake Is On To Ezra

In the promo for “Close Encounters” Jake sits down with Aria and asks her if Ezra is the person that she has been scared of since she met him. Apparently Jake witnessed Ezra having a heated, and semi-violent conversation with someone and he is concerned for Aria’s safety. Is Aria too delusional to see what Jake sees, or will she finally open her eyes to all of the obvious clues pointing to Ezra’s shady behavior lately?