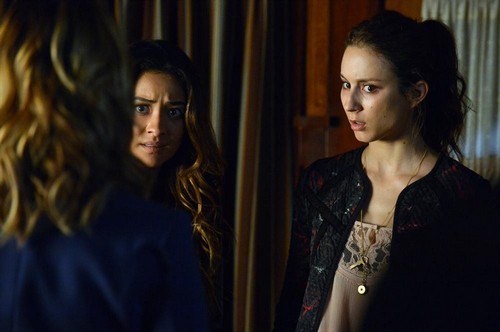 Pretty Little Liars fans are still reeling from some of the revelations last week on Episode 4.16 “Close Encounters.” But, it is almost time for an all new episode of PLL. On Tuesday, Pretty Little Liars Season 4 Episode 17 “Bite Your Tongue” will air on ABC Family. And, it looks even more intense than “Close Encounters.” Here’s what PLL fans can expect to see in 4.17 “Bite Your Tongue.”

Hanna has had a lot of time on her hands considering her recent single status, and she has taken up a new hobby, reading crime novels. After reading crime novels, Hanna has a new plan to determine who was buried in Ali’s grave. In “Bite Your Tongue” Hanna Marin is a woman on a mission.

Sure, “A” stole Alison’s diary back from the liars, but that doesn’t mean Spencer didn’t snap a few photos of the pages before they lost it. In Episode 4.17 Hanna won’t be the only woman on a mission, Spencer Hastings will spend the episode trying to decipher the stories in Alison’s diary. She is determined to figure out who the “Mystery Boy” is in Alison’s diary.

Aria’s little brother Mike Montgomery will make his first Season 4B appearance in Episode 17 “Bite Your Tongue.” And, according to the official synopsis for the episode, Aria is not happy with Mike’s choice of friends.

“A” ups the ante and gets closer to the liars than ever. In the promo for “Bite Your Tongue” Hanna Marin finds a note from “A” in her tooth! According to the video, the note from “A” says, “Stop Looking.”

Mona is back in Episode 4.17, and up to no good. Aria and Mona go head-to-head when Mona starts holding secret meetings with Aria’s love interest Mr. Fitz. Ezra and Mona are the last people the liars need joining forces right now. Aria is on to Mona though, and in the “Bite Your Tongue” promo video she confronts Mona.

There will be an Alison flashback in Episode 4.17, and it takes place in a bar. In the Canadian promo video for the episode Alison can be seen in the bar and states, “I don’t know why I am taking advice from someone who doesn’t even know how to order.” So, there is a good chance that this may be the flashback that reveals the identity of the “Mystery Boy” in Alison’s diary.

Although it has not been confirmed, Mona and Mike Montgomery may be hooking up in Episode 4.17. The PLL cast teased months ago that Mona would have a “love interest no one would expect” in Season 4B, and in the synopsis it states Aria is not a fan of Mike’s latest choice of friends. In the promo Aria is confronting Mona and asking her what her “agenda is?” So, there is definitely a good chance there is some truth to this rumor. How crazy would it be if Mike and Mona hooked up?!