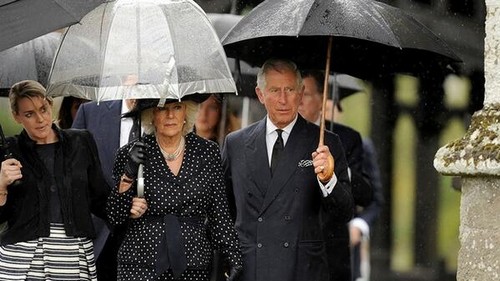 Just when Camilla Parker-Bowles thought that her life couldn’t become any more regrettable her prince of a husband really decided to up the ante. A famous cross-dressing performer by the name of Grayson Perry recently turned up at Buckingham Palace in full regal attire. While meeting Prince Charles at the event it seems that the royal confessed to Perry that he fantasizes about dressing up in his mother’s clothing, tiara and all!

According to the May 12th print edition of GLOBE magazine Camilla is absolutely mortified. She has held many of Charles’ secrets for three decades now, one of those being how much he enjoys playing dress up. She thinks it’s embarrassing and had figured that she could use this little nugget as leverage in a divorce battle. Threatening to tell Charles’ secrets might mean a bigger payday and clearly good ole’ Cami never believed that he would divulge this detail himself. It cuts her off at the knees and she had hoped to be able to separate herself from the humiliation if the media ever found out about Charles’ proclivities. Now it’s kind of a dead issue, at least in terms of being a financial windfall.

Do you think Charles made the disclosure because he was trying to joke around and simply bond with Perry or was there more to it than that? Was it actually an opportunity to diffuse Camilla at least in one area and Charles decided to jump on it? Do you think that the prince really likes to cross dress behind closed doors? I think he just wants to wear the crown! Tell us your thoughts in the comments below!