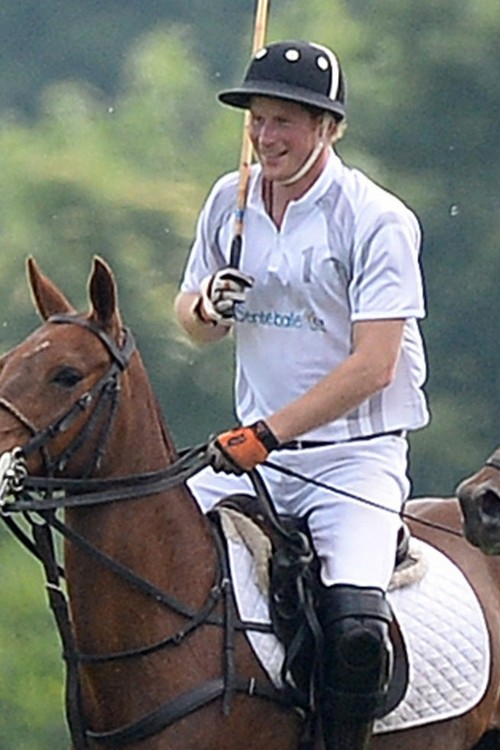 Jeez, what is with all this royal butt-flashing? Prince Harry [who’s newly single, might we remind] was spotted chatting up some random blonde during a weekend charity polo match, and guess what? The blonde’s skirt just happened to blow up thanks to the wind, revealing her bum in a coincidentally similar fashion to Harry’s sister-in-law, Kate Middleton.

Conspiracy? Did this blonde purposefully plan such an incident so that she could get Harry’s attention? Honestly, I wouldn’t put anything past these people, especially since women all over the country are desperate to land the newly single royal bachelor.

Of course, whether she intended it or not, the upskirt situation definitely caught Harry’s attention. He reportedly joked about it to the blonde, revealing the comparisons between his sister’s recent scandal as well.

Hmmm… it’s interesting that he’s about to joke about the incident in such a cavalier fashion when it was [and still is] such a big deal to Kate and Prince William. Will, especially, is still reportedly furious at photographers for taking advantage of the situation and getting such a compromising photo, and it just enforces his hatred of the media and paparazzi, all of whom he views as vultures. Obviously, he was never a big fan of the media following his mother’s death when he was younger, and the way Kate’s been treated in the press no doubt just makes it worse.

But here we have Harry making fun of the whole situation and joking about it – so is he just not taking it at seriously as the rest of his family, or is he using the situation to flirt with the blonde?

Honestly, it’s probably a little of both. Harry never seems to take things as seriously as his brother, and it was probably a good way to chat up the blonde. But I don’t think his family will be happy to hear about the casual way in which he’s joking about the incident to random girls at polo matches.