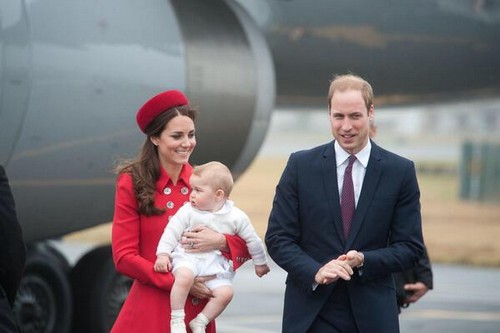 Update: Prince William, Kate Middleton, and Prince George have arrived in New Zealand and we have the pics and video for you to see below! After a long and grueling journey the royal couple and their adorable son landed in Wellington and were greeted with a a traditional Maori dance.  I’m sure Kate and Will were delighted by the spectacle but having made the trip over to Australia four times I assure you that what they desire most right now is sleep!

Main Story: As our favorite royal couple were set to embark on their three-week long tour [including 13 towns and 45 events] to Australia and New Zealand they were greeted with some ridiculous controversy by Internet idiots. The royal family was photographed at the airport in Sydney while waiting to catch a flight to New Zealand, and the photos have been circulating around the Internet all day today.

The photos show Kate Middleton carrying baby George, while Prince William seemed to be carrying some sort of stuffed kangaroo toy for him. Meanwhile, excitement in Wellington, the royals’ first stop, has reached a high point. Fans are hoping to catch a glimpse of George and his parents while the family is in Wellington, and their first event will be a Ceremonial Welcome in the city. This welcome will include dancing, singing, and speeches, which George will no doubt enjoy.

Then, on Wednesday, Will and Kate will attend an event for Plunket patients and nurses at Government House. Then, they will travel across the Cook Strait on Thursday for yet another ceremony, this one involving wreath-laying.

The couple will proceed to travel North on Friday, meet with Air Force personnel in Auckland and then they’ll sail around the city’s harbor on a yacht. They’ll then take a boat trip across Auckland, before they go their separate ways on Saturday.

Will and Kate will attend separate events in Waikato on Saturday, and then reunite to view the War Memorial in the evening. They will visit the Avantidrome, where they will reportedly open the velodrome, start some races, and meet several Olympic athletes.

On Sunday, they will visit Dunedin and Queenstown, and this two-day trip will include a Palm Sunday service. They will also watch the Rippa Rugby festival, and participate in a wine tasting.

On Monday, they will visit Christchurch and go over plans to rebuilt the city. Tuesday will be a ‘free day’ for the family, and then Wednesday marks the last day of their New Zealand trip, where they’ll visit the Royal New Zealand Police College.

So far, everything surrounding their trip has been mostly anticipation and excitement, but there are a select group of detractors that are already criticizing the royal family in New Zealand. Apparently, Kate and Will’s request to install a forward-facing booster seat for George in their royal transport has gotten a lot of negative reactions. This is because it apparently goes against the recommendations for babies to sit in rear-facing car seats.

Seriously? THIS is what people are getting so bent up over? People on Twitter are going wild criticizing Plunket, the baby and toddler organization that fitted the seat, calling it irresponsible for allowing a forward-facing seat for a baby.

Again, I highly doubt the royals care about this. They’re doing things their own way – they’ve proven that in the past, and they’re not going to let a little criticism get in the way of that.